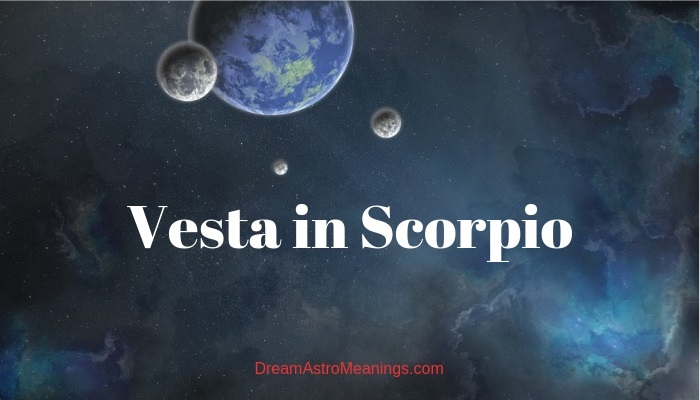 The asteroid named Vesta is the fourth discovered asteroid in our Solar system. This is the second heaviest asteroid as well. It was discovered in 1807.

There are two giant craters on its surface, which are believed to have formed as a result of massive collisions which happened billions of years ago. Meteorites from these collisions were found on Earth.

This asteroid is the brightest that could be seen from the Earth’s surface.

This asteroid’s name comes from the ancient Roman goddess of fertility, home, and family, Vesta.

Vesta was a well-known and respected deity among the Romans and she had a holiday dedicated in her honor. Vesta temple was in the Roman forum and she had six priestesses who were in charge of the temple.

They were all virgins, obliged to remain as such in the next 30 years after being appointed to that service. They were chosen by the chief priest, the Pontifex Maximus at the age of six to ten.

No one was allowed to enter the temple but the Vestal virgins or the Pontifex Maximus and later the Roman emperor. Women only entered it once a year, during the Vestalia holidays.

Vesta was the goddess of fertility and women who couldn’t have children prayed to her for help.

Vesta was also considered the goddess protector of the Romans. She was usually represented by the sacred fire burning in her temple. The Romans believed that while the fire was burning nothing bad could ever happen to them.

The Vestals were in charge of keeping the fire lit. The ones who failed to perform that duty were severely punished, usually by beating. The Vestals performed sacred rituals to enhance the harvest and women’s fertility.

The asteroid Vesta in an astrological sense symbolizes the way we deal with the issues at work, or regarding some sacrifices we should make, or regarding our devotion to something or someone, as well as the issues we experience due to refraining from intimacy or personal relationships.

Vesta rules the psychological conditions caused by abstaining from intimacy and relationships or caused by fearing them.

The sign and the house where Vesta is placed in our natal chart are very important. They indicate the areas we should focus on the most. It also indicates which people and situations we should get rid of from our lives because they don’t serve our highest purpose.

The asteroid Vesta also indicates the way we treat our physical needs and our passion, and shows whether we choose to exhibit them openly or we choose to suppress them.

Vesta also shows the things and people we are devoted to, like some endeavor, a project, some person, beliefs, causes, etc. It also indicates the areas we choose to ignore the issues we have or we choose to keep them private and not talk openly about them.

These are usually very important areas for our life, but we seem to keep having struggles in regards to them.

Vesta also gives us the persistence and endurance to maintain our focus on our goals and also overcome the challenges along the way.

Their emotions are strong and they demand complete devotion from their partners.

They consider physical intimacy one of the most important things in human existence and yet, many of them can feel guilty for indulging in such pleasures up to the point when they begin suppressing their needs and urges and refraining from intimacy.

That, in turn, causes many psychological issues and frustrations which disable these people from functioning properly.

They are very intuitive and many of them possess the power to read other people’s minds.

In some cases, they might become overly critical, suspicious, and judgmental of other people’s actions and behavior.

Women with Vesta in Scorpio are usually magnetically attractive and seek satisfaction of their strong physical desires although they often feel guilt and shame for being so passionate.

They are often intuitive and possess some supernatural powers, such as healing powers or psychic gifts.

Some of these women are able to see through people and intuitively know their motives and thoughts.

They have a powerful aura which attracts people to them and makes them admire these women. They desire a relationship where they could establish a deep emotional and passionate bond with their man.

Some of the good traits of Vesta in Scorpio: energetic, intuitive, possess a powerful will, detailed, deep, passionate, healing abilities, psychic gifts, able to transform their personality completely, etc.

Some of the bad traits of Vesta in Scorpio: critical, suspicious, prone to feelings of shame and guilt, judgmental, etc.

Vesta in Scorpio people usually express their personality in an intense way.

They seek depth and go into details of all subjects they get their attention to.

For these people physical intimacy is one of the most important experiences they could have, regardless of the social outlook on these subjects.

On the other hand, they often have a feeling of shame and guilt in their intimate relationships which could lead to repressing of their physical needs and developing different frustrations.

These people are very deep and usually have a strong intuition. They also possess powerful energy and are able to devote themselves completely to achieving some goal they have.

These people are very passionate and they seek complete devotion from their partners.

They can also be very judgmental and prone to criticizing. They possess the power of transformation of their personality.

Many of these people have psychic and other supernatural gifts. They are very intense and people can feel their powerful energy. Many of them possess healing powers as well.

They can also be prone to doubt other people’s intentions.

People with Vesta in Scorpio are passionate beings.

They possess almost magnetic energy which attracts people to them. They have a strong need for physical intimacy which often causes feelings of guilt and shame in these people.

They seek a deep emotional and physical bond with their partner. They are intuitive and many of them possess healing powers.