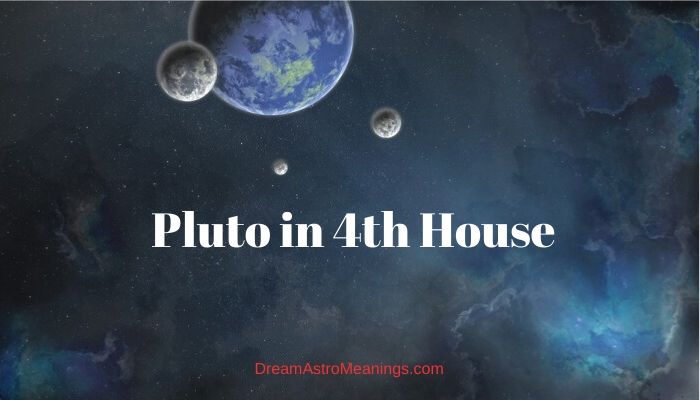 Most of people interested into astrology and horoscopes know that natal charts are based upon a full circle of 360 degree, according to Western astrological system. Degrees of the chart are divided into twelve units, called astrological houses.

Mutual interaction of houses, planets and zodiac signs mark an individual’s chart and make it unique; thus, the native’s life experience is going to be one of a kind, just as his or her character, temperament and personality.

The twelve fields could be divided and categorized by different criteria and they do not require an even division, into twelve fields of equal degrees range.

Such an approach is explained by the fact that, since the Earth was round, sunrays do not fall evenly upon it.

What is more important to us here is that astrological houses represent different areas in a native’s life and that planets affect our experiences of these areas.

The Fourth House in natal charts is probably the most intimate astrological field. This is a deeply private field, associated with family bonds and emotions related to such bonds.

The fourth field represents the very beginnings and the endings.

The Fourth House was the embryo of the native, his or her roots, the family the native comes from, genetics, traditions, ancestry and overall origins.

This field is about the long gone ancestors, about ages of blood bonds and heritage and inheritance. The field is associated with inheritance the parents or some ancestors have dedicated to the native.

The Fourth House represents the home, the house, the homeland, the hearth and fire the native feels safe by.

Everything private and intimate is associated with this field. The Fourth House tells about the deepest and the most intimate feelings of the native, including deeply hidden vulnerabilities and wounds.

It also tells about the parenthood and the parental figure; in male horoscopes, it represents the mother, while in female horoscopes it stands for the father. Sometimes it gets a little bit blurry, depending on the role the parent takes up.

This deeply intimate house is about things that were private, including private businesses.

As the house of family was about the beginnings and endings, it is about origins and roots, yes, but also about the final days and death, referring to the place the native was going to end up at, the tombstone.

Some would say this was a dangerous house, since it indicates the way of dying and the place of burial.

Astrologers treat this field as a very fragile house and a malefic one. The Fourth House is one of the Water houses and water is of mutable, mysterious quality.

Therefore, this field also has to do with the occult properties and energies that were not brought into conscience, that were hidden and non-processed adequately.

For this reason, the Fourth House stands as a threatening one, although its malefic quality is far weaker than that of the Sixth, Eighth and Twelfth House.

If planets in the fourth field were malefic, Mars, Saturn, Neptune or Pluto, it is very likely that the native originates from a family with a lot of burden of one kind or another. It tells about warrior ancestors, those who have fought wars, who have struggled and who have gone through very hard times in general.

The native would carry their burden in the current life; his or her life is not likely to be easy and jolly. The fourth field indicates loss of home, family tragedies, adopted children and so on.

Many malefic planets inside the fourth field indicate unhappy childhood, troublesome upbringing circumstances, illness in the family home, arguing parents and else.

With malefic planets inside this field, the native feels uncomfortable in the own skin, own place, country and home.

Depending on other circumstances and the chart, there is a risk that the person grows into an introverted, closed, shy, reserved, insecure and a fragile individual.

However, if planets inside the Fourth House were good ones, to say so, things could be much better.

Benefic planets inside the Fourth House indicate pleasant and stable interfamilial relationships, great relation with parents, happy and comfortable childhood, popularity of the native that usually comes later in life.

Such combination indicates getting inheritance, having a stable and enjoyable family life, a loving partner, nice kids, fair living conditions.

Of course, some people with benefic planets in the family field could also be shy and introverted, but in a good way.

They could find all the happiness of life inside their family and a very close, pretty private circle of close people. They could have beautiful relationships within the family and enjoy their safe haven, their own home place.

Many planets in the Fourth House, regardless of the nature of aspects, could possibly have psychic abilities.

Pluto was an ancient god of the underworld, brother of Jupiter and Neptune, in Roman mythology. His Greek counterpart was Hades, whom we also know as brother of Zeus and Poseidon and the god of the realm of the dead. The name Plouton, however, appears in Greek sources.

Pluto was considered a just and a solemn deity, not a cruel or evil death god, although ancient people would not call his name with joy and praise.

The myths say the god of the underworld and afterlife would rarely leave his dark dwellings; eventually, everyone would come to him.

He was told to have been merciful and fair towards people who led a life of virtue and who were good.

Besides the association with death and afterlife, Pluto was also associated with the concept of wealth and abundance, most likely because he ruled the underground realm, where many a precious material lies hidden from our mortal eyes.

Pluto is a malefic planet. Distant and very slow, from our point in the universe, Pluto has never finished its journey around the Sun, from the day it was discovered.

Although considered mysterious and malefic, let us not be too judgmental.

Pluto, just as any other planet in astrology, has its positive and negative side. Pluto could be incredibly destructive, but it also has positive characteristic.

Individuals who have a strong Pluto influence in their natal chart have a very specific view on the world and approach to life. On a deeper level, Pluto represents transformation and regeneration.

This planet represents separation from the old and birth of something new; it could be identified with the concept of rebirth. However, it must be said that it was rarely an easy road.

Personal transformation is probably the most difficult experience, but it is needed. Pluto induces transformation, but it also makes it very turbulent.

The thing is that, if we are to change something about ourselves, we need to face our inner demons; we usually reject them, almost instinctively, because it is a scary experience.

When we do not accept our flaws and ‘demons’, Pluto creates great turbulence in all areas of our life. Its ‘dark’ energy, to say so, spreads over all other segments of our life and veils other experiences.

It would significantly affect the exact area of life corresponding to the house Pluto sits in.

Once you bring the actual need to change into your conscience and finally accept that you need to transform, Pluto releases you.

This other influence of Pluto feels almost like a blessing; it feels like enlightenment, on a spiritual, mental, even physical level. It feels like an actual rebirth. Now let us look into aspects of Pluto in a natal chart.

If Pluto was in heavy, tense aspects, the native is likely to become a manipulative person, someone with a tendency towards suspicious activities, meant to control others and to subdue them.

Pluto, however, represents the other side of that coin, encompassing detectives, inspectors, professional spies and investigators, police and else. In general, people and organizations that have some kind of (hidden) power are usually under a strong influence of Pluto.

This planet is also associated with powerful resources, with precious materials that bring power to people and that lie beneath the ground; oil, black gold, reservoirs and derivatives, as well as all other underground materials and riches would be a good example.

People who have a favorably positioned Pluto are characterized by especially powerful and magnetic aura.

Such individuals could become inspirational leaders, prophets, psychologists, surgeons, detectives, but also mafia leaders or spies. In any case, they are likely to become people of power, though the type of power would depend on the rest of their chart. They would have influence over other people.

Dominant Pluto in fair aspects indicates impressive reputation and influence over others and wealth.

Pluto in the Fourth House – Pluto in 4th House

Pluto in the Fourth House indicates emotional distancing and mystification of the own feelings, which are most likely associated with certain experiences related to childhood and family.

It does not have to be anything dramatic and terrible, but it could be related to a pattern of behavior and reacting you have inherited from your parents or learned throughout your childhood. Your fears and insecurities have roots in your upbringing.

Perhaps your parents or one of them was very quiet, shy, insecure or even ashamed because of certain personal reasons you, as a child, was most likely unaware of. Children easily absorb their closest ones’ vibes and energy.

In most of the cases, parents are unaware of this, since they only have good intentions towards their kids. Their mysterious behavior and quiet demeanor often comes in order to protect the children.

However, it often turns out to be a wrong move. Overly protected child does not build the own defense mechanism and has no idea how to deal with troublesome situations later in life.

They tend to over-analyze circumstances, because they feel insecure about them and are unsure of others’ intentions, suspicious, trusting only their parents or convictions they have inherited during childhood.

This mysterious parental attitude, meant to keep the child away from danger, often turns out to be counterproductive.

An adult with Pluto in the Fourth House is likely very afraid of change, of any change, because he or she is used to their parents dealing with life changes themselves and, what is worse, in a way that the child never sees it. Good intention, though often poor results.

Another common problem with people with Pluto in the Fourth House is that they often feel ashamed about their origins, while most of others are proud of their roots, the place and family they come from.

Reasons for such an attitude could be many and very difficult to identify; the concrete reason depends on the individual case. The sense of inexplicable guilt is common.

It could happen for an obvious reason, but one the native was not to be blamed for. For example, the native could come from the family whose ancestors are known to have committed certain bad things in the past.

Parents or one of them feel the guilt and pass it on to the child. Thus, the child carries the burden he or she has nothing to do with, actually.

It could happen that the native’s actual childhood experiences were traumatic or problematic for real; it depends on the chart and an individual life, of course.

However, with strong Pluto in the Fourth House, the native finds it difficult to let go of childhood traumas.

If we remember the basic influence of Pluto, we should take it as a path of the road.

Such injuries are not meant to defeat you, but to lead you through transformative process.