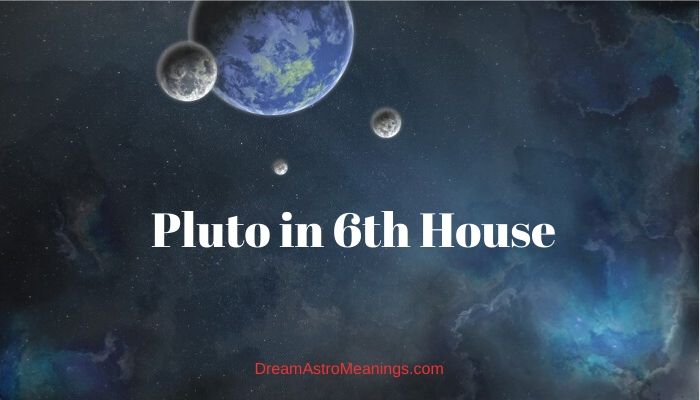 Interested into astrology? Then you have certainly taken a sneak peek into your natal chart. Natal chart reports are not that easy to understand, though, if you were unfamiliar with at least some basis of natal astrology.

Natal charts are like a frozen reflection of the sky, as the sky appeared at the time you were born. Each chart is a full circle, divided into twelve, not necessarily even fields.

These fields are of great importance, since they represent different areas of a person’s life.

Planets are to be found inside them, matching specific zodiac signs and forming aspects.

Today we will be talking about the interaction between houses and planets, focusing on a specific combo, the planet Pluto inside the sixth field.

Sixth House is one of the traditionally malefic houses. This is the field related to enmity and illness, all kinds of struggles and hardships in the life of an individual.

It is especially associated with the health of the native, with the native’s habits, diet, attitude towards the own health and organism, the connection between work and health, both physical and mental health. The Sixth House is known as the House of Health.

Although no house has only a bad side, of course, we could say that this field indicates all kinds of unpleasant experiences, troubles, fears and threats, insecurities, skepticism, shame and especially all kinds of problems related to the working environment.

For this reason, many would call it the house of trickery, fraud, ill intentions, unhealthy rivalry, hidden enmity and so on.

We would also be right to call it the field of routine, since this field tells about your daily routines, related to your work and healthy. Diet and potential health issues could be seen through this field.

The Sixth House represents your unconscious self, your ability to adapt to circumstances and the environment. The concept of work and the concept of health are in a tight relation inside the sixth field; they were consequentially connected, so to say.

Apart from these, the Sixth House represents relatives, aunts and uncles. However, it is traditionally a not very pleasant field, associated with enmities.

The House of Enmity

From the psychological point of view, it encompasses doubts, skepticism, fears, worries, anxiety, troubles, weaknesses, vices, character traits that contribute to bad self-image, mental health and else, negative and malicious thoughts, mental disorders and actual pathological problems of the sorts.

Overall, this includes every single thing that, in one way or another, damages and weakens the psyche of the native.

From the physiological point, the Sixth House encompasses everything that literally damages the body and the physical well-being of the native, including all sorts of diseases and illnesses, injuries, broken bones, cuts, everything that was harmful for the body, including bad, unhealthy habits, such as improper diet, improper rest, probably even improper activities.

This is, of course, connected with psychological challenges and difficulties.

We also have the sociological aspect of the concept of enmity that could be seen through the sixth field.

From this point of view, the sixth field is associated with actual enemies, people who do not wish anything well to the native, thieves, people who were envious, who would like to set you up, people who cheat, lie and try to bring you down or at least make you feel down, for their own ill reasons.

However, it could be associated with a healthy type of enmity, as well.

In this regard, the Sixth House is associated with sport rivals and competitors, with all kinds of activities that require a spirit of a fighter and a competitor; there do not have to be any ill intentions behind it, but it still requires of the native to struggle, to fight his or her way.

Thus, we could say the sixth field was the house ob obstacles, challenges, difficult circumstances and conditions, regardless of if those were healthy, moral and whatsoever or not at all. The Sixth House is also associated with lawsuits and court.

Apart from all these, this is also the field of service and it encompasses all the people you serve, but also those who serve you.

Jobs related to duty and service are linked to the Sixth House (working for military service, for example).

The Sixth House is one of the cadent houses, associated with the planet Mercury and analog with the sign of Virgo.

In mythology, Pluto was the god of death in the ancient Rome. He was brother of gods Jupiter and Neptune. In Greek mythology, we have Hades as the lord of the underworld, the brother of Zeus and Poseidon.

Pluto or Hades became the ruler of the realm of death after his brother Jupiter (Zeus) had overthrown their Titan father and shared the rule over the world with his two brothers.

Although a death deity, Pluto was not an evil mythical character or a cruel god. He was considered just and merciful towards those who have led a good life, of virtue and morality. Pluto was also associated with wealth and abundance.

Besides ruling the dead, in his domain were the depths of the earth, where precious materials and the fertile layers of the soil lied in the darkness, valuable to mortal human beings.

The planet of transformation and regeneration, of death and of rebirth, Pluto is one of the most interesting planets in astrology, at least to some.

People who have a dominant Pluto in their natal chart would often feel as if they were very different from others. Pluto is associated with mystical powers and energies, even with magic.

Although a transcendental and a collective planet, Pluto could have a strong influence in natives who have an emphasis on this planet.

Pluto is the higher octave of the planet Mars, also the planet associated with power and force, although, with Mars, the energy is very direct, impulsive, straightforward and raw.

With Pluto, the energy is hidden, covert, and tremendously powerful. It could be as devastating, just as it could be regenerative and splendid. How would Pluto exactly affect the fate of the native?

Beyond general associations with mystery, secret power and else, Pluto has the power of transformation.

This planet represents the separation from old patterns and the birth of new ones; it could be applied on systems of values and beliefs of the native, of attitudes and goals, of views on the world and so much more. However, the change is exactly what most people were afraid of.

We speak about the personal, very deep change. Most of people are not even aware of the need of change or they were simply very flexible and do not dig much deep.

However, Pluto challenges you to improve yourself by facing your inner demons, but no one actually loves that. Pluto itself represents such ‘demons’, our deepest and darkest impulses.

The Planet of Transformation

It encompasses the deepest and the scariest impulses one possesses, something we are even afraid to think about.

Pluto forces you to embrace those, in a way, but you resist. Pluto responds by inducing very turbulent energetic tides that spread over your entire world; that is why you actually have to go through this process and to finish the cycle of transformative phase. This is the role of Pluto.

It could destroy you, but it would give you the strength to rise again to your power and to even greater one.

The effect of Pluto could be illustrated by the image of Phoenix, the mythical bird that would burn out to ashes and then rise again, beautiful and spectacular, reborn and renewed.

Pluto is, by all means, associated with power, though the exact type and the use of power depend on other factors.

Pluto in troublesome, heavy aspects, makes the native a fantastically powerful manipulator, a person who would deal with shady business, mafia, criminal activities, usually associated with resources of power and so on.

Such Pluto was the ‘father’ of terrorists, dangerous people of all sorts, mages and sorcerers. In good aspects, Pluto would also link you to the dark activities, but you could play a different role.

Detectives, investigators, people who work for the police or military forces, surgeons and healers and others are also children of the mystical, powerful Pluto.

Pluto is also associated with the concept of wealth, since this planet rules the valuable sources of power that lie below the earth’s surface, including ‘black gold’, precious minerals and else.

Pluto could make you powerful, influential, a person who leads and controls others, one way or another.

Pluto in the Sixth House – Pluto in 6th House

People with Pluto in the Sixth House are very protective over their work, often very private about it. They are diligent and responsible about their job and they enjoy working.

However, this has its good and bad sides, which is a common case with Pluto’s intense and fixating energy.

People with Pluto inside the Sixth House tend to turn their work into their obsession. As you might expect, that is not a particularly healthy habit.

They turn their job into their own occupation, as compensation for something else they were deprived of or lacking or simply out of fear of losing it. They are afraid of losing the job, because they have turned their job almost into a personality trait.

They have incorporated it into their person, so without it, they feel like losing identity. The obsessive effect of Pluto could be very strong in here.

Following such a path, the native could end up being paranoid about the work itself, about the fear of things going wrong, losing it or else. Well, you definitely know the answer, but first you have to accept that there was a question, in the first place.

In the end, such an attitude towards the job would become self-destructive, because you cannot hold control over everything.

What you need is a change; Pluto would guide through the transformation, in its own, not always pleasant way. You would feel the best if you were your own boss, for example, but it means you should dare to try to be the one.

Pluto in the Sixth House people often come to despise those who try to control them and those who criticize them.

People with Pluto in the Sixth House are great analysts. They seem to come alive whenever there was a problem requiring further and deeper and systematical analysis. They have a keen eye for details and, as we have mentioned, they love to work on something, with full dedication and focus.

The Sixth House is the house related to both job and health and their mutual effects. For this reason, people with Pluto in the Sixth House tend to focus on the relation between work and health.

Since Pluto is generally in favor with the alternative and spiritual, and since it has to do with healing and regeneration, in the sixth field it could manifest in a very good way.

People with such position of Pluto tend to be very successful in the area of alternative medicine.

They are amazing and enthusiastic researchers through the area and they could come up to fantastic discoveries and solutions. They could amazingly combine professionalism with the concept of health and healthy living.

Working in this area leaves them more freedom than they would have if working in a classic environment, so to say.

At the same time, it satisfies their need to analyze things to the detail and draw connection.

In the domain of alternative healing, they could show of their obsessions in a positive way. This could be quite regenerating experience, which is, in truth, Pluto’s intended effect.