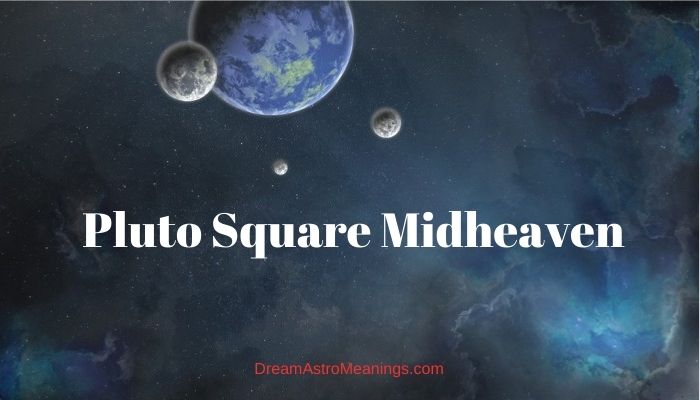 Square does not deny the presence of talents along the line of influence of the planets that form the aspect, only the ascent to the top goes through obstacles and the cultivation of the best qualities of the sign, where the members of the union are.

This can be difficult, especially if there is a higher planet, symbolizing the karmic debts of the clan, which the native will have to solve.

Pluto already means rebirth through the destruction of stereotypes that inhibit the development of relationships and attachments of any nature, and being in the square with the Midheaven, showing the place of fame and professional success, it attracts conflicts with the powers that be.

Even wanting to change the world for the better, the native will face the resistance of parents, teachers, bosses, and will face a choice – calling or indulging the beliefs of other people.

Quarrels and confrontations arise with those who have a strong Pluto or a similar aspect.

Accordingly, it is difficult for them to get along with their peers who have achieved a high position before them, and even more so to work under their supervision.

Starting from adolescence, a person unconsciously chooses a destructive model of behavior, attracted by the sensory instincts of early awakened sexuality.

The temptation to permissiveness, the understanding that it is worth breaking the law and desires will be easily fulfilled, excite the Plutonian nature, but can destroy the reputation in the bud at the slightest miscalculation.

With additional negative connections with the 8th and 12th houses, there is a greater likelihood of suffering from connections with crime and from imprisonment. Carriers of the Pluto-MS square believe that they know everything in the world and strive to control others.

Even if their expertise is undeniable, bosses do not like to feel dependent on a smart subordinate. When the native manages a project, heads often fly. Friendship at work does not arise, except for the position of Pluto and MC in air signs.

A person will have to be reborn from the ashes many times like the Phoenix bird, so it is important to know the main dangers of the aspect: irascibility, irritability, a tendency to destroy dissenting people at the root of fate; hatred of competitors, envy of successful rivals in work and love; toxicity, the desire to devalue the achievements of other people, even close family members, to be the only star in the sky.

achievement of the goal goes through the thorns of failures, obstacles, disappointments; career success is possible only after a period of trials, suffering and rethinking of priorities, a change in behavior towards a peaceful side; using the good feelings of people for selfish personal goals, abuse of authority, fear instead of discipline; need for power and control, focus on career as the most important thing in life.

Aspect bearers are incredibly sexy and often use their personal charm to get the job they want. This happens especially often with representatives of creative professions. The only criterion that distinguishes a native from competitors is sex appeal, and it moves him to the top.

Personal relationships it is more than likely that in childhood, the native faced violence against his personality, desires and goals from one of the parents.

Most often, the mother was an employee of a secret or law enforcement organization or was associated with dark magic, which left an imprint on her worldview and ways of raising children.

The owners of the Pluto square – Midheaven believe in the need to be stronger than those they love in order to subjugate them, and not suffer from a lack of control over the feelings and actions of loved ones.

The only way they know is to inflict pain in order to keep them submissive.

If Venus, Ascendant and Mars are in water and fire signs, these are aggressors and manipulators who skillfully involve in their networks, and then two versions of events turn out: they do not know what to do with love and business partnership, pulling the blanket over themselves, or they suffer from jealousy and inability to act as a worthy partner.

The most effective and easiest way to reveal the native’s personality is if the companion is sexually interested in him.

A person with this aspect will have to devote a lot of time to studying psychology in order to understand their predisposition to violence and find ways to interact with others.

The profession is most often associated with this need: psychotherapists, astrologers, surgeons, neurologists, investigators, pathologists, actors, writers, directors and detectives.

Native is attracted by jurisprudence, but there are two sides of the coin: he solves the issues of lawlessness, helps the oppressed, or vice versa, serves as the devil’s advocate and successfully pulls criminals free.

In this case, there is the accumulative karma of Pluto, which will subsequently hit the owner of the horoscope with imprisonment, especially if Mars is in the 12th house. In general, litigation and scandals are frequent companions of this square and legal education will help to get out of them with honor.

Only from the top of a high social and financial position, therefore, from youth, you need to make every effort to find them. Talismans made from natural stones will help protect yourself from adversity: rauchtopaz, obsidian, and jet, black onyx and tourmaline.

You need to be a leader. It is necessary for you to be the head of the parade, and not to take a place in the corner.

Even when you have no supporters behind you, you have to follow your own path without looking back and making concessions.

One parent has a significant influence on you and the bond between you is strong. This can have a favorable outcome, as the conjunction has a difficult aspect, it often happens that the parent tries to dominate to your detriment.

Sometimes it happens that an important change occurs in your life, often when you are least aware of it and are able to see it only later. You will invest a lot of your life energy in building your professional life.

To achieve the goals you have set for yourself, you demonstrate such wisdom that amazes everyone around you.

In the classical sense, Pluto at the Zenith point emphasizes activity in atomic physics. You probably have an intuitive energy that you definitely put to use in a way that can benefit everyone.

Pluto is responsible for renewals, which can be interpreted as its position in Zenith that your status will constantly change. Maybe the field of professional work will change, even when your loved ones don’t see the point in it.

You achieve great success in your profession; but it takes time, energy, and total dedication to achieve the goals you set for yourself. You often have to overcome failures on the path to success, be born from the ashes, like Phoenix, and continue.

You do not stop from various manipulations to achieve your goal. Rarely can you give as much as you receive. Your worst trait is recklessly using others for your own purposes and it can happen to you that, once you get to the top, you realize that it is not as beautiful there as you imagined.

Obsessed with a deep-rooted desire to change the conditions around you, the resistance you encounter is very painful, because it leads to conflicts at work and at home. You probably have small problems with your parents in childhood and adolescence.

If you have not taken the opportunity to change your outlook on life, these conflicts will continue in your professional life. This may be because you are convinced that you always know the best way to do everything.

You achieve great success in your profession; but it takes time, energy, and total dedication to achieve the goals you set for yourself. You often have to overcome failures on the road to success, and be born from the ashes, like Phoenix, and continue.

You do not stop from various manipulations to achieve your goal. Rarely can you give as much as you receive. Your worst trait is recklessly using others for your own purposes and it can happen to you that, once you get to the top, you realize that it is not as beautiful there as you imagined.

Affected by a deep desire to change the circumstances around you, the resistance you encounter is very painful and leads to conflicts both at home and at work. You probably had difficulties with the workers during your childhood and youth.

If you do not use your chances to change your view of the world, these conflicts could continue on a professional level. This may not happen because you always know the best way to do something.

The desire of such people to radically change the order in society and in the house inevitably leads to conflicts with the leadership and representatives of the authorities, as well as tension in relations with parents and family members.

At the service they criticize everyone, and at home they openly dictate. They constantly think that they always know everything better than anyone else.

Such people excel in their chosen profession, but this requires time, energy and full dedication to work in order to achieve their goals.

Every now and then he has to overcome setbacks and losses on the way to success, to rise from the ashes like Phoenix and continue what he started earlier. He does not shy away from all sorts of manipulations if they make it easier for him to achieve goals.

Only occasionally does he give as much as he receives. The worst quality is the unceremonious use of others for your own ends.

Often, having reached the top, such a person sees that everything is not as good as it seemed to him. This often disappoints him. But usually he finds himself a new goal.

The desire to change the order leads to conflicts with bosses, parents, family members, authorities.

It seems to them that they know everything better, they criticize the bosses, the government, and the dictatorship at home.