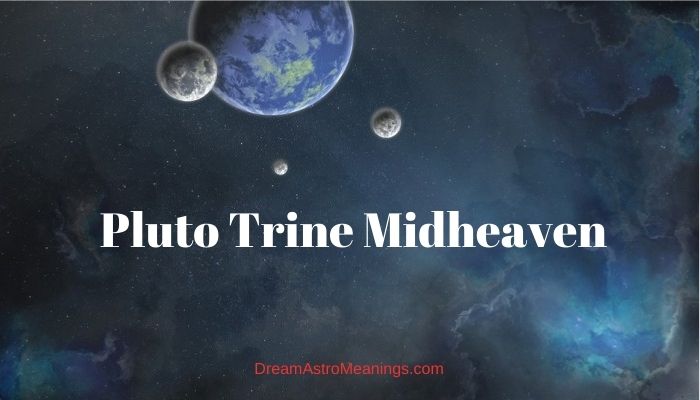 The middle of the sky shows the place of glory and exaltation of the owner of the horoscope.

Significance here is not only the sign of the zodiac of the 10th house, but also the aspects of the planets to its highest point, the Meridian (MC), since they give a more accurate description of the ways to achieve the goal.

However, not always positive astrological connections guarantee the harmonious fulfillment of the destiny. The talents and abilities of the carriers of the sextile Pluto – MC are manifested both to save people and to destroy them, if the native succumbs to the temptation of the instinct of destruction and omnipotence.

They will have to be done in advance to avoid the blows of fate.

Work with a psychologist to eradicate complexes, refusal of anger and revenge on offenders, as well as a detailed understanding of the nuances of the aspect: a pronounced ambition, the ability to get along with the powerful and communicate on an equal footing with financial tycoons and military leaders.

Hypnotic influence on the interlocutor: they can suggest anything and win over to their side; the need to solve puzzles forms the basis of the profession: they become detectives, investigators, doctors, archaeologists, geologists, historians, magicians and palmists; the desire to rule leads to politics and financial business.

Willpower, decisive and persistent character, the ability to be reborn from the ashes of disappointments and defeats even stronger; perfectionism, addiction to the occult and secret societies. Sextile is an aspect of alternating action.

Given the Plutonian nature, it is obvious that he is involved in periods of disasters, political upheavals, stress, helping the wards to show their talents and show themselves as a leader leading to salvation.

Sometimes the impetus for the development of events is a move or meeting with a celebrity.

The owners of the Pluto – MC sextile exude a mystical sexuality, which is especially pronounced if MC, Sun or Ascendant are in Scorpio, Aries or Leo.

The crowd likes them, but they don’t always get reciprocity from one person they like. The native’s mother was most likely a domineering, irascible nature, who ruled the family alone.

On the one hand, she could insist on intensive study, sports and music, which later will help the owner of the horoscope on the path to success, on the other hand, such dominance generates internal stress and complexes, which will then have to be worked out with a psychotherapist.

Since childhood, the carriers of the sextile Pluto – MC strive to pluck the forbidden fruit, bypassing strict parental rules, and learn to manipulate the minds of others in order to certainly get what they want. They are wonderful friends, but until then, until the choice arises: take off in a career or friendship.

The native’s bosses are powerful and charismatic individuals who have a lot to learn from. Practical implementation of the Pluto – MC sextile

If people with such a powerful aspect sit in one place and do not grow professionally, the reason is in genetic and psychological complexes, which are worked out through working with a specialist of the appropriate profile, but also with an astrologer who will see karmic tasks that require solution.

The arrest in development with sextile Pluto – MC is terrible: the thirst for power and understanding of the hidden inner strength are torn from the inside without the possibility of realization.

It will take courage, and therefore the strengthening of the energy of Mars, to go out in public and become a bright star that attracts public interest with originality and magnetic sexuality, like Elvis Presley, Rihanna, Kevin Costner, Jennifer Aniston, or be an opinion leader in a narrow circle of experts.

In any case, you need to strive for the recognition of your authority and the possession of large sums of money.

It is worth remembering the sad example of Hitler, who possessed Pluto’s sextile to the MC in Leo, and those global destruction of the destinies of people and countries, in order to initially take care of using his forces for good.

Midheaven on fate Ambitions and thirst for success are off the charts, even if the Ascendant is in Pisces, Virgo, Cancer, and the person gives the impression of a shy and simple boy or girl. In the soul, any owner of an aspect is the ruler of the world.

When the MC and the rising sign are in the element of fire and earth, the native does not hide this, and sometimes he is ready to bulldoze both obstacles to the goal and those who do not like him.

Surprisingly, the heat of his ambition beckons patrons and sponsors who prefer to remain in the shadows, but to help financially.

Depending on the manifested aspects of the figures, the owner of the horoscope becomes a leader or plays this role perfectly, being a puppet in the hands of shadow rulers. Men and women with sextile Pluto – MC, even not being classic handsome men, literally electrify the atmosphere of the hall, speaking in public.

The easiest way for them to fall in love with the audience and a specific person is by going up to the podium.

This is partly because they oppose commonplace approaches and use unusual oratorical techniques. It must be remembered that the planetary principles of Pluto involve cleansing and sacrifice.

The harmonious influence of the trigone with the Midheaven Meridian usually relaxes and dampens ambitions as the native realizes that everything comes easily and effortlessly.

Success in the profession, recognition from the first steps, popularity during the years of study at the university bring up confidence in the closeness and patronage of fate.

But everything is different when Pluto is the second member of the aspect.

The higher planet indicates the karmic connection of the chosen profession with the clan, and the lord of darkness symbolizes the need to transform the usual approach to the native’s activity into new methods.

If a person continues the family business, the more obvious the need to improve or even rebuild it.

It is the powerful and pulsating power of Pluto, pulsating with a thirst for change that gives rise to a relentless quest to satisfy ambitions.

The best option is to see what professions of the ancestors respond to with the desire to continue them, and whether they correspond to the sphere of influence of the 10th house, where the Meridian of the Midheaven is located, as well as nearby planets and, of course, Pluto itself.

Aspect bearers are very successful in business where they manage fabulous sums of money. Small business will only annoy them. But trine works in a peculiar way.

Efforts still have to be made. It is easy to get the opportunity to enter a big game, meet famous personalities, and there is also protection from clashes with criminals, racketeering and conflicts with law enforcement agencies.

However, the native will work and study in full force if he wants to satisfy the ambitions to rule and command, and not fulfill someone else’s will. By nature, the gift is given to be an excellent leader, proactive and enterprising, able to raise an empire from ruins.

People with the Ascendant and Mars in fire signs will immediately become such, the rest will have to study all aspects of the aspect’s influence in order to use it to the maximum: strong will, indefatigable desire to win: they actively act, but do not demonstrate success to the public until they are sure of their brilliance results.

interest in the occult, the power of reason, words, magic rituals; the need for self-improvement, training and the desire to do it together with the team; foresight, charisma, punctuality, restrained attitude to public speaking, prefer to lead the process from the shadows; attachment to beautiful, expensive things with history, be it the property of your own family or antiques.

The need to save money and spend only on significant areas: training, travel, research and investment; friends help to achieve success in the shortest possible way; talent of a politician, businessman, lawyer, financial advisor, insurance agent, nuclear physicist, mathematician, investigator.

A career in a chosen business should really please the native. If it becomes boring and unpleasant to work, the plutonian energy is blocked and stagnation occurs.

In adulthood, owners of the Pluto-MS trine often change their field of activity if it did not initially coincide with their karmic goals. Aspect attracts many signs of fate and the decision is usually correct if understood correctly.

The native’s mother may have practiced astrology or strongly believed in the child’s unusual destiny. From this came the exactingness of studies, payment of additional classes for better development, investment in future education.

The native was prepared for a special mission, or vice versa, he himself went to it through obstacles. Much in the interpretation depends on the additional figures of the aspects and the degree of elaboration of the generic karma.

One thing is invariable: the more knowledge and practical experience the bearer of the trigon Pluto – MC gets, the easier it is for him to understand relationships with people.

Success reveals his sociability, ability to please and organize his team. Happiness in marriage here directly depends on professional fulfillment.

As a leader, the native is not too authoritarian, knows how to listen and delve into the essence of the problem, without requiring blind obedience.

Trigon Pluto – The middle of the sky extinguishes jealousy, therefore, unlike conjunction, cooperation is possible here without fierce competition with colleagues and loved ones.

For the successful use of the power of the aspect, it is important to understand: you cannot remain in a subordinate position in a secondary role, but it is also uncomfortable to be a wedding general, the face of the party without real powers.

The role of the privy councilor, the “gray cardinal,” is to the liking of the native.

To have power, but not to advertise it publicly, will work out in business and science, but creativity is not closed from the carriers of the Pluto – MC trine, these are unforgettable actors and musicians.

Examples of this: Paul Newman, Anthony Hopkins, Eddie Murphy, Uma Thurman, Meryl Streep. In any case, the trigon is a good application for global popularity, provided that you work on yourself in the profession.

You cannot refuse the help of influential persons. Regardless of the choice of specialty, it is recommended to increase financial and legal literacy, use talismans of protection from enemies.