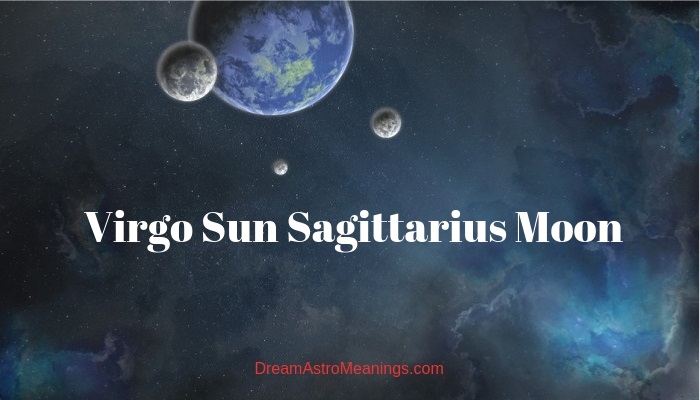 People from our surroundings usually see the sun sign side of our personality, while the moon side usually remains hidden and is known only to us and the people we care about deeply.

People with Virgo sun and Sagittarius moon are a mix of earth and fire element.

In this person, the natural inquisitiveness of Virgo is combined with the adventurous and exploring spirit of Sagittarius.

These people could be considered an improved version of both Virgo and Sagittarius because each sign neutralizes the negative traits of the other. These people are not as rigid and strict as typical Virgo people and are not as absentminded and flakey like Sagittarians can sometimes be.

On the other hand, if their planetary aspects are a bit challenging, especially the ones their sun and moon are making, they could have the positive traits of these signs annulled or to some extent diminished.

People with this Sun/Moon sign combination are very intelligent and have a lot of knowledge on a variety of subjects.

They could appear disinterested at times, but they are noticing every detail of any situation, carefully packing them into a wider picture, and making impeccable conclusions.

These people are usually very focused and make sure they don’t miss anything, but in some cases, they could be lacking focus and be absentminded.

In general, these people are usually very interested in expanding their knowledge in a variety of subjects. They are usually well-read and have a lot of information to share with others.

Unlike typical Virgo people, these people are much more easy-going and open. They are more approachable and make contacts with people with more ease.

Many of them possess the adventurous spirit of a typical Sagittarius and are excited with the idea of traveling and exploring new cultures.

They love to combine their travel with the possibility of learning something new. Most of them are still making detailed plans for their trips but have a more relaxed approach than some other Virgos.

These people are rational and take their time before making decisions, although the sign of Sagittarius sometimes makes them do irrational things, which they usually don’t regret doing.

For example, under Sagittarius influence they might be inspired to do something their rational Virgo side would never do, and yet, they enjoy immensely when they experience it.

They could also be inspired to take on some risks which as Virgo they wouldn’t, but they end up gaining a lot because of deciding to take the risk.

They are not as stiff with money and enjoy spending it as much as they enjoy saving it. They could be prone to making some risky investments, relying on their good luck, which often turns out to be very profitable.

The sign of Sagittarius gives these people a dose of easiness and a more relaxed approach towards life’s matters.

They are fun to be around, although they might be prone to choose carefully who they communicate with, unlike a typical Sagittarius who enjoys interacting with different people, enjoying the experience of diversity.

Unlike typical Virgo people who might be prone to a negative attitude and criticizing everything and everyone, these people usually have an optimistic approach towards things, and expect the best to happen on most occasions.

They could become overwhelmed with feelings of negativity if things unfold in a different manner than expected, but in general, these people could be considered optimists.

In some cases, they could be prone to critical and judgmental behavior, having the liberty of making comments on others people’s behavior and actions.

They, unlike typical Virgo people, usually don’t have a problem with being criticized by others and consider that a friendly gesture and not something which could insult their ego.

These people are usually not very egotistic (unless they have some other influence in their natal charts). They cannot be easily influenced, and they tend to do things their way.

They are hard workers but some of them manage to find an easier way to earn their money without the need to put in much effort, usually by choosing some creative profession they enjoy.

These people love their independence and freedom and don’t allow other to put their noses in their business.

The good traits of sun in Virgo and moon in Sagittarius:

The bad traits of sun in Virgo and moon in Sagittarius:

In matters of love, people with sun in Virgo and moon in Sagittarius usually have a relaxed approach.

These people love their independence very much and have a problem with deciding about committing to someone or getting married.

The main reason is the fact of changing their way of life and the need to give up on it and their freedom.

They also dislike the compromise they need to make to live in a union with their partner because they are used to doing things their way.

These people often opt for an open-type relationship where they don’t live with their partners or they keep the right to date other people.

These people are straightforward and honest and want things to be clear and open between them and their partners. Honestly speaking, these people are not the most faithful types.

When they find the right person and fall in love, they usually change and become devoted to their partners.

Their partner needs to be someone who is very intelligent, interesting, communicative, open-minded, independent, and adventurous.

They imagine their ideal partner as someone they could spend their time doing things they enjoy, such as traveling, exploring new things, and gaining new insights and knowledge.

Their partner should also be someone they could rely on, stable and organized.

They are passionate but want someone who can inspire them both physically and intellectually. When they make the commitment, these people are devoted and reliable.

It might be necessary to remind them of their duties once in a while, but in general, they are very organized and usually take care of the organizational part of the relationship or marriage.

They love to make surprises for their partners and spouses, especially the ones which include some travel.

These people are not very emotional in a classical sense. They express their feelings through their actions and behavior.

It is never boring around them, although they might be prone to sulking and mood change when something isn’t the way they have imagined it.

Although some of them prefer not having children, these people make good parents and love spending their time with their children.

They try to build their love for learning and expanding their horizons through by different people and learning about new cultures.

They also love doing fun activities with their children, and they usually don’t have a problem taking them on their frequent voyages.

The best match for a sun Virgo and moon Sagittarius is a fire sign, preferably Sagittarius, with an influence of an earth element.

These people get along well with other earth and fire signs, providing they have compatible aspects between their natal charts.

Air sign could also be a good match if the person also has some fire or earth in their natal chart.

Water sings are the least favorable match for these people (unless they have some prominent earth and fire element in their natal charts).

People with sun in Virgo and moon in Sagittarius are a combination of earth and fire element.

These people are not as tense and rigid as typical Virgo people could be.

They love their independence and freedom very much and that often represents a barrier for a long-term commitment or marriage for these people.

The idea that they would need to give up on their way of life and change most of their habits to be able to live in a union with someone often sounds too limiting and complicated for these people.

Some of them also have a problem with committing to just one person because they love the joy of change and different experiences with different people.

Not all of these people are promiscuous and unfaithful, but many of them are.

The ones who don’t mind committing to one partner exclusively usually love to keep a part of their freedom and independence.

They usually undertake the role of the organizer in the relationship or marriage and make sure all the duties are done on time.

The ones with the more prominent Sagittarius influence might need a bit of reminding from their partners because they might have problems focusing and remembering all they need to do.

These people might not feel comfortable in the role of a parent. Many of them choose not to have children. The ones who do have children, make good parents though.

They make sure their kids have everything they need, and they try to inspire them to enrich their personalities with knowledge of different matters, especially foreign cultures. They love doing fun activities with their children.