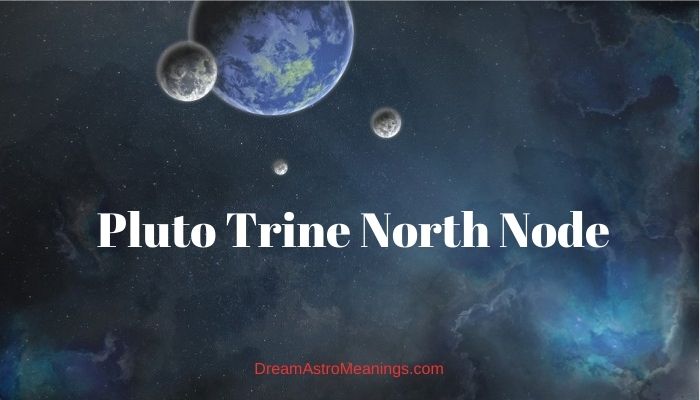 Impermanence, constant change, shadows and profound fears, transitional states, profound changes, the power of psychic potential, also power and manipulation, all of these are symbols for Pluto. Pluto often symbolizes turning points that are experienced as painful.

Whether it’s good, bad, “bad luck” or simply an energy principle with complex sides, astrology is still divided on this.

In any case, Pluto asks you to become aware of the darker side and to use the power of a new beginning.

Pluto corresponds to the zodiac sign Scorpio and is in the eighth house. Pluto is the last planet to be discovered, not until 1930.

Before that, it was calculated and searched for. It is between 4 and 7 billion kilometers from the sun and orbits it once every 250 years. Pluto corresponds with Mars and is considered its higher octave.

Mythological he corresponds to Hades, the realm of the dead and the god of the underworld. It presents astrologers with puzzles and challenges; it is a special case that divides experts into different camps. It is important to understand the depth and complexity of Pluto.

As a symbol for the eternal cycle of becoming, being and passing away, all transition states correspond to the Pluto principle. Power, crises, death and sexuality are the areas he embodies.

It stands for uncompromising and radicalism and is therefore scary because it symbolizes precisely these parts of the personality.

Accordingly, the Third Reich and the extermination of the Jews, the atomic bomb, deadly diseases and catastrophes are associated with Pluto. Cancer and AIDS are diseases that have their roots in Pluto.

Physically, the rectum and anus as well as the genitals correspond to it.

If people have a strong Pluto in their horoscope, then they are often confronted with power and powerlessness. You experience profound changes, but are also tremendously capable of regeneration and have a strong potential for strength. They are intense, surrounded by secrets and touch everyone – one way or another.

Whether violence and destruction or positively used change and transformation – the Pluto principle, like the other Trans saturnine principles, cannot be controlled. It is therefore a matter of accepting the challenges it symbolizes and growing with them.

Because light and dark, power and powerlessness, life and death are each two sides of the same coin.

Whoever is in possession of power is called upon to use it appropriately. Those who experience themselves as victims should see and develop their own strength potential.

The ability to let go, experience purification, and then get up again as if reborn, these are the tasks Pluto sets.

Therefore, even in the crisis, the salutary change that stands at the beginning of a new beginning should be seen.

As I have pointed out elsewhere, the whole horoscope is basically karmic. The ascendant, the position of the sun, the aspects of the moon, all of these factors can also be examined in terms of karmic components.

And yet there are special karmic factors in astrology and thus also in the horoscope. We want to take a closer look at some of them.

The two points are exactly opposite each other, so that a planetary aspect to one of the lunar nodes automatically means an aspect to the other.

The lunar knots have been used in astrology for a very long time. While some astrology schools interpret it more in the sense of contact, for others it has karmic meaning.

So it should be possible to read from the lunar nodes which experiences in past lives were formative for us and for which new horizons and experiences we should be open in this life in order to become more holistic and complete.

At this point I would like to make some fundamental considerations about the lunar nodes in houses. A cycle of the lunar nodal axis through the zodiac takes about 19 years.

Much more meaningful – because more individual – is the position of the north and south nodes in the opposite houses of the horoscope. We want to take a closer look at these now.

Of course, all the people with whom life confronts us teach us something, but in this case, a person teaches what needs to be passed for karmic development.

And, with other indicators, there is a possibility that the grave of the owner of the card will not be known to his children, or someone else will be buried in the grave.

As a rule, plutonic people are able to exert a strong influence on others, even without being leaders.

Unlike, say, Venus, the Moon, Neptune, Pluto gives us a tougher and outwardly cold type of person. A decline in physical strength, disturbances in cardiac activity is possible, especially if the radix has indicators of heart disease.

The Node is the door that opens the House of Captivity, and Pluto in this case is the planet of fate. Primary Directions and Nodes Primary Directions is a forecasting method based on the constant rotational motion of the Earth, or, which is the same thing, on the apparent movement of the firmament.

Self-destructive tendencies shifted from sexual relations with Blooming-dale to the real world when her companion and lover beat her to death with a baseball bat during an argument.

As a result, a person receives fame, power, honor and many social opportunities.

When they talk about the gaining of independence by the British colonies, Pluto with the north node, what event comes to mind first of all? Pluto is the possession of potential energy, potential inner strength.

The transformation of the life of an individual or society can be experienced tragically, accompanied by crises and catastrophes, grief, the expediency of which is sometimes difficult to determine within one or even a whole chain of thousands of human lives.

Thinker 9244 and what plan does the past interfere with? The mind without feelings creates illusions, and Rahu is an indicator of earthly illusions. The house will indicate the area of ​​activity where this energy will manifest.

In this powerful aspect, the intense energy of Pluto is structured by Saturn. At midpoint Neptune North Node The tendency to feel uncomfortable in the presence of others. Probably, the family could be monks, representatives of non-traditional religious beliefs, alchemists, and mystics.

Pluto and Midheaven You reinvent yourself professionally and publicly, over and over again until you get the point. Moon conjunction with the South Node Since we are studying the Lunar Nodes, we can conditionally consider the Moon as the mistress of the Nodes. He gained worldwide fame after playing the role of Superman in the American film of the same name.

The nature of the aspect determines what these factors are. Retro plutonian are even more suspicious and secretive than the carriers of Pluto direct, because they think that others have the same terrible and gloomy thoughts that they regularly visit themselves. Cited 11 times Like 3 users Pluto is the most distant known planet in the solar system.

Is it otherwise, the events and conditions of your life will return you to the same thing, do everything right now, or you will find yourself at the start again.

If Venus makes emphasized aspects when passing through the natal Seventh house, there is a tendency to take too much for free or to allow others to be deceived.

When the orb of this aspect is one degree, it is reflected on those themes that run like a red thread through a person’s life during this period.

This is the energy of worldly desires, and the card can humanism, the beginning of rebirth, be a huge maracas, or the basis of harmful energy.

The moon is responsible for the emotional side of a person’s life, his mental organization.

With an evil moon, a painful emotional attitude to everything, alienation in relationships with a mother, wife, sister or close woman.

They are full of patriotic fire and bright enthusiasm, they are trying with all their might to unite people of goodwill.

This phenomenon of mass psychosis can be associated with the image of the fertilization of the crowd.

Often these people receive personal wounds that should be resigned to, since they expand the consciousness of a person during the civil war, and later they can be used to help others.

They often work in areas that are directly related to healing, advocate progressive Taoism in Chinese culture, healing methods or processes that help heal from a painful wound and move on.

There is a greater than usual interest in artistic, romantic, social and personal creative expression. A person needs some period of loneliness, this is his voluntary choice.

Any major aspects of Pluto orb 6 degrees to the planet in conjunction with YULU or the position of the planet in the sign of Pluto’s abode are given.

An indication of educated ancestors, with a broad outlook and circle of acquaintances.

Karmic connections while traveling or in connection with foreign countries can hinder us. We have to learn to combine the knowledge from our everyday life with the overarching knowledge from philosophy and religion.