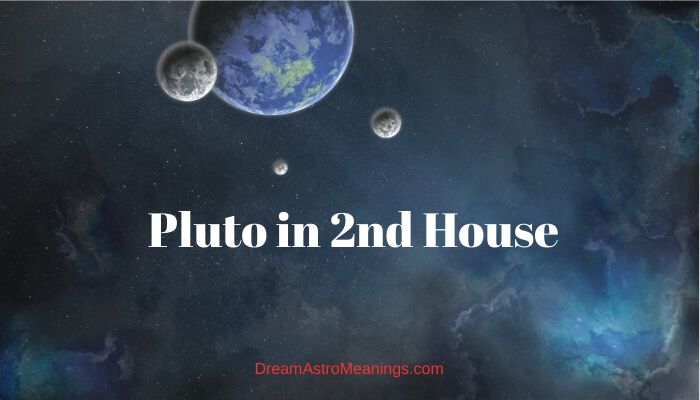 Horoscopes are unique patterns of planets, frozen images of the sky, taken at the moment of our birth.

According to astrology, planets affect individual lives, by the principle of ‘as above, so below’. Each horoscope is unique as snowflakes were unique.

Each chart is divided into twelve fields of life experiences and each individual’s experience in each of the fields will be unique and shaped up by the planets playing roles and affecting different areas of our lives.

The Second House is also known as the House of Possessions. Indeed, this is the field associated with what we own, but not only in a purely material sense.

This is an Earth house, analog with Taurus and a succedent one.

The second field tells about possessions, properties we own, our earnings and losses, income and outcome, our ability to earn money and or ability to keep it.

This house is associated with our work and efforts we invest in order to earn something and accomplish certain degree of stability in life. This is the house of money, and in many senses.

This house indicates if the native has enough skill and talent to make money, as well as if he or she will be able to manage it well and to keep it. It indicates fortune and success in the area of finances and material stability, but also debts, poorly managed money sources and else.

The Second House is house of what we posses, how we handle our property and how we deal with different system of values, including how we shape our own.

Pluto appears in various sources, also as Plouton. This deity is associated with more than the concept of death and the afterlife.

Pluto and Hades, for example, play similar role, but the gods were different in character, as it is the case with many Greco-Roman variations on the same deity. Two dominant myths Hades and Pluto have in common.

One is the gods’ genealogy myth and the other is the very famous myth of the abduction of Persephone, also known as Kore or Proserpine, depending in the source and the version.

How Pluto or Hades became the lord of the underworld? According to the Greek myth, the Titan Cronus, who overthrew his own father, the sky god, Uranus, and got to rule in his place, was eating his own children.

The Titan did so, because he was afraid of the same destiny he gave his own father; he was in fear of his children overthrowing him, so he devoured them.

Rhea, Zeus’ mother, has saved her son and hid him from Cronus. In the Roman myth, Zeus was Jupiter and Cronus was Saturn.

Anyway, Zeus managed to bring down his merciless father and shared the rule over the whole world with his brothers Poseidon (Neptune) and Hades (Pluto). Zeus ruled the skies, Poseidon got the sea and Hades, the underworld.

Hades or Pluto thus became the god of the death. Greeks were afraid of Hades and so they would not say his name aloud; instead, they would use descriptive terms to refer to the god of death. Well, no one wanted to invoke him.

The king of the underworld was a quiet, less active god, compared to his brothers and relatives. He had not much need to leave his gloomy residence.

Eventually, everyone would come to him, for death is certain. Pluto was not a cruel and evil deity, although his domain was death.

He was a just judge and a merciful god; he was fair and merciful towards good people. He was relentless, strict and a fair god. However, no one actually worshipped the god of the dead, as people did with other gods.

It must be said, however, that Pluto was associated with concepts other than death and the afterlife.

He was sometimes depicted carrying the ‘horn of plenty’, cornucopia. He was a powerful god who had dominance over rich depths of the earth, the womb of the earth hiding precious minerals.

In addition, under his domain were deep underground layers, needed for a plentiful harvest. Pluto has always been more than god of the dead.

The myth you have probably heard of is that of Hades abduction of Persephone. She was the daughter of Zeus and Demeter and Hades was in love with her. He had taken her into his kingdom and made her his wife.

According to the myth, she was released from the underworld, but she had to return to Hades one-third or one-half of the year and her change of the place of dwelling corresponded to earthly seasonal changes.

Pluto is the last of the transcendental planets, the group of the last three astrological planets, Uranus, Neptune and Pluto, associated with the impersonal.

Besides these, we have first five personal planets and the two social ones.

Transcendental is something invisible, untouchable, something beyond the self, something elusive and subconscious. These planets were higher collective and generational.

As such, the distant and mysterious Pluto is the higher octave of Mars. It is a powerful planet, but, unlike Mars, which is aggressive, bloodthirsty, very physical, carnal and wrathful, though mighty, daring and courageous, Pluto’s power is covert, subtle, obscure and mystical.

This planet is associated with magical powers, with powerful intuition and influence over masses.

We could find parallels with gods these two planets carry names of, Mars and Pluto (Ares and Hades), indeed. The planet Pluto, along with personal planet Mars, rules the sign of Scorpio.

Many deem Scorpio the most obscure and mysterious, though powerful, magnetic and irresistibly attractive zodiac sign. Such is the power of Pluto, as well.

Pluto is the source of a powerful energy that could be used for majestic things, but it could also lead to great disasters and destruction. Pluto is, indeed, associated with devastating phenomena and occurrences, such as cataclysms, wars, catastrophes and other destructive concepts.

It is also associated with dark and gloomy places, such as tunnels and caves, graveyards and else.

Pluto is the planet of the unknown, subconscious, of deepest desires, be it carnal or of other sort, the deep impulses we could even be afraid of. Pluto does represent our dark side, but that was not the only side of Pluto itself.

Pluto is also the planet of rebirth and renewal, regeneration and transformation; all these are a part of growth and development.

Pluto’s energy could be harmful, but also healing. It depends on the position of the planet and of aspects in a natal chart, if we analyze individual natives’ horoscopes. Pluto is associated with spiritual journey, self-cognition, transformation and power. Something has to be sacrifice in order for something new to rise.

Words of one of the famed Game of Thrones series families suggest that what is dead may never die, but rises again, harder and stronger.

We could take that as an illustration for this planet of regeneration. Although Pluto was a very distant, transcendental and also a collective and generational planet, some would say it could not affect an individual too much.

However, if it were in a prominent place or forming strong aspects, it would definitely leave a mark on the native’s life, destiny and personality.

Pluto in the Second House – Pluto in 2nd House

Pluto in the Second House definitely has to do with a specific attitude towards possessions and gathering resources.

The native with Pluto in the third field is instinctive and intuitive when it comes to sources of income; he or she could sense a good opportunity and instinctively find a good way to make money and maintain and grow income.

The native with such a placement of Pluto has a well-established set of values and knows own price, in the absence of better words. These people tend to be very possessive of what they own or claim as their right.

For that reason and that reason only, they hate when someone takes something away from them. It does not have to be an ill intended activity or an evil deed, but something that was meant (and even expected) to happen.

The thing is that the native forms strong sentimental bonds with certain possessions. Now, it does not necessarily have to be a material possession; it could be a habit, an environment, a concept or whatever else.

Simply, when someone enters and takes it away, disturbing the flow, for things need to change or so, the native with Pluto in the Second House would feels particularly distressed.

Sometimes these natives catch hold of things that were originally not theirs, things given them to take charge of for a certain period or something like that (we say ‘things’, but it could be more than an object).

When the time comes to return it, they feel as if someone has taken a part of them.

They are very sentimental and tend to be overly possessive. Of course, it could be a good thing, to certain degree.

It means that they really care about things they hold dear, but, on a downside, they could convince themselves they own things never meant for them. You could easily see how such an attitude could lead to both inner problems and problems with people.

It must be said, though, that, apart from possessiveness, one could never and should not think of these as thrifty or stingy persons.

Pluto in 2nd House – My Precious

Being very possessive of all kinds of things, from material objects to concepts, beliefs and even other people, figuratively speaking, has its good and bad sides.

People with Pluto in the Second House love to have control over everything they deem their own. It makes them fantastic strategists, efficient planners and well-organized people, when it comes to finances and money matters.

It comes very naturally and instinctively; these people are not tense about such things, because they have a good feeling about it and they are indeed successful in managing their own resources. Others could make great use of their advices regarding such matters.

These natives have an instinct for money and earning. They are money savers, but they are not penny-pinching.

However, their need to control and possess could lead to a whole lot of unhealthy behaviors. The urge to control everything and everyone comes from so well known fear of change.

It is very likely this native would have to experience losing something, in order to learn the lesson of the inevitable change.

This will help the native to realize that real treasures in life have no price tag. In fact, they have already known it, but were afraid to acknowledge and accept that simple fact of life.