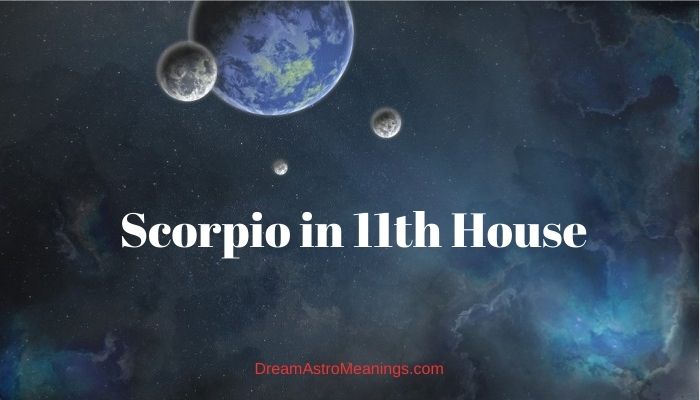 Scorpio belongs to the water element, this is a feminine, negative, fixed sign that is composed of Cold and Wet, its ruler is the planet Mars. In recent history, the planet Pluto has been given dominion over this sign.

Energy is driven by a very strong, unyielding will, for which there are no obstacles, extreme strength. Jealousy.

People under the worse influence of this constellation are cunning and insensitive, lustful – always interested in everything that is alien… The eighth sign on the Ecliptic, extends from 210th to 240th degree.

Charismatic and interesting people, have a regenerative ability to recover from illness – the most common diseases of the colon, genitals, body defects, face. Symbolizes destruction, death, passion, fatal place in our horoscope within the field it occupies, indicates the person from whom we get inheritance.

Scorpio at the top of the first field describes a person as attractive to the opposite sex, in his attitude and behavior he can dominate erotically and defiantly.

The planets that are near the ascendant tell how a person manifests it – whether it is a controlled nature of desire or a tendency to violence and rudeness. Mars or Pluto in this field indicate the possibility of a violent nature, but also a more serious illness that can happen to a person.

In the second field, Scorpio describes our partner’s money or inherited something that we consider our own and use as our own. Within the third field, the parent provides us with a car or we have a problem with relatives, a debt, about which the disposers talk in detail

In the fourth field, we inherit an apartment or house, within the same we may have a problem with installations or groundwater if further interpretation indicates it…

The constellation setting at the top of any field can only provide basic information, the depositor’s circle is what explains what person happens further and under what conditions…

In the fifth field, Scorpio talks about passions, losing a loved one, spending money on a guide. In the sixth, it describes a job where we may be in danger, or we choose it in such a way that it allows us to work with someone else’s money.

At the top of the seventh house, Scorpio describes a widow, a strong and wealthy partner. In the eighth, it gives the preconditions for very difficult operations, dangerous jobs. In the ninth, danger on a long journey, from strangers.

At MC, it is held by those who deal with big and secret affairs, those who become unscrupulous managers. In the eleventh field, he describes the pension we did not earn, the suffering of a friend. Within the twelfth field, Scorpio warns us about the doctors who treat us, about the risky and secret jobs we do…

The owner of the Moon in the 11th house of the horoscope most of all values ​​spiritual freedom and independence in life. You cannot encroach on his personal space and limit his capabilities. Such people know perfectly well what brings them joy in life and what they need to strive for.

They clearly understand which values ​​are true and which are false. The subject with the Moon in the 11th house is distinguished by democracy, humanity, sincerity, independence of judgment and broad views.

Such a person does not hesitate to dream. He knows that his most cherished desires will certainly come true. You just need to believe in yourself and in your capabilities, tune in to the positive development of the situation and act in accordance with the laws of fate.

Typically, space generously endows these dreamers, idealists and romantics. They do not pursue material goods, but from the bottom of their hearts wish good, happiness, prosperity and a peaceful sky over their heads both for themselves and for absolutely every person in the world.

It is not surprising that the owner of the Moon in the 11th house is surrounded by friends and like-minded people. Such a person willingly maintains connections in the group and actively participates in the life of the group. He is attracted by activities in various social movements and charitable organizations.

If the Moon in the 11th house of the horoscope is damaged, then the native’s life is full of all sorts of surprises, and it is not always possible to predict the course of events. These can be unforeseen situations in everyday life, troubles at home, unfavorable family circumstances, etc. But despite this, the owner of the horoscope in difficult times can hope for the disinterested help of friends and patrons (mostly female).

The sign of the zodiac, in which the luminary in the 11th house is located, will tell you more about the native’s friends and his relationship with them.

The moon in Taurus and Cancer will give friends who are faithful, reliable, caring and always ready to provide support. Such a friend will always shelter, feed, listen patiently and do everything possible to improve the situation.

If this luminary is weak in quality (that is, located in Capricorn or Scorpio), then the friends of the owner of the horoscope may turn out to be treacherous, selfish, greedy, annoying and unpredictable. In this case, you need to carefully choose your closest environment.

Let’s get acquainted with what influences and what astrological significance the XI house of the horoscope has. In the classical view, it is the home of freedom.

But what is freedom? And why the XI house is ruled by the same planets as the X house, the planets of freedom and non-freedom – Uranus and Saturn? The answer to the question about the esoteric meaning of any house is always laid down in the symbol of the sign associated with this house.

The symbolic image of Aquarius is two parallel wavy lines, meaning two streams of time, a clear separation of good and evil, human existence on two levels – material and energy. This symbol is clearly associated with the two rulers of the sign and the house, Uranus and Saturn.

People of the XI house of the horoscope are guided more by subjective time, therefore it changes sharply and asynchronously for them. That is, a person of the 11th house has his own rhythms, his own position, his own view and his own ideas about the continuity of times.

Through the 11th house, there is a perception of a fundamentally new, something that is not inherent in a person at the moment of birth.

This perception, as well as the ability to look ahead or go ahead of time, is associated with Uranus, a planet of deviations from the generally accepted, a planet of reforms, restructuring, mutations, a planet, thanks to which a qualitative leap to another level can occur.

Pluto gives rise to group solidarity, discontent, a desire to remake, transform, Uranus is a revolutionary release of Pluto’s energy, which accumulates for a long time.

At the heart of any transformation or restructuring is the need to revive what once died, transform what is doomed to die, give a new round of development to oneself and others. In the graphic image, Aquarius pours water from two jugs – in one the water is dead, in the other alive. Both waters are associated with resurrection.

That is, the goal of the 11th house is resurrection. Dead water acts as a unification of lost harmony – this is its highest goal, and the lowest is to kill.

Living water in the lowest sense dissolves life in a single stream, levels personality, that is, dissolves it in society. In the highest sense, living water gives new life. They only act together, as a whole

He does not like it when rubbish is hidden in the hut, but he loves empty chatter even less. Therefore, if he begins to speak, then his criticism sounds serious and weighty, although, probably, too emotional: he can “turn on”, especially with a strong Scorpio.

The entire team, and force him to reconsider many views, including established ones; he is able to demonstrate intolerance of many positions to which everyone is accustomed and no longer noticed as abnormal.

With the defeat of Scorpio, many of a person’s views on life and the shortcomings of the team’s work will disagree with the general group opinion, and criticism may seem (and in fact be) too vicious, destructive and unfair. It is easy for a group to label a person as a denigrator, although there will be more truth in their words than the group would like.

Here, the study goes along the path of finding a common language with the group and softening its emotionality; if this is not done, a person can become a victim of his own disharmonious behavior: the group will drive him into a corner and will meet with preventive aggression any, the most innocent (in his opinion) activity.

A harmonious Scorpio gives an accurate picture of the situation, and most importantly, a socially acceptable group will say: “How exactly did he express what was painful for us all, and besides, he offered a wonderful way out of the situation!”

A harmonious Scorpio, especially at the level of an eagle, will, however, have a tendency to overprotect in the team and oppose it to the world around it. He needs to understand that only a team that cares not only about itself, but also about the outside world can develop successfully.

With friends, this person will be discerning, emotionally vulnerable, but proud; on the other hand, ignoring the minor troubles that they will bring him, he will not forgive direct betrayal and tear all past memories and attachments from the heart.

He will have few friends, but the contact with them is deep; a tendency to manipulate and hypnosis, which, however, with a not too affected card has, as a rule, acceptable manifestations.

Surrounds himself with dynamic, aggressive and powerful friends who can handle many difficult tasks and serve as a backup and protection.

Rarely takes the weak as friends. There are few friends, but the contact with them is deep. Very keenly and emotionally perceives the affairs of the team, especially any of its shortcomings and imperfections. With its harsh and weighty criticism, it can turn the whole team on and force it to reconsider its positions.

With friends, he is shrewd and careful, but emotionally vulnerable and proud. He harbors resentment and only at home, alone, he gives vent to feelings. He does not forgive betrayal and in this case breaks off the relationship without regret. Dissatisfaction and caution often hinder success in life.

He prefers the society of famous and rich people, avoids people below him in material and social status. In society, he tries to be invisible, observes what is happening from the side, rarely interfering in conversations.

If the Moon in the 11th house of the horoscope is damaged, then the native’s life is full of all sorts of surprises, and it is not always possible to predict the course of events.

These can be unforeseen situations in everyday life, troubles at home, unfavorable family circumstances, etc.

But despite this, the owner of the horoscope in difficult times can hope for the disinterested help of friends and patrons (mostly female).

He will never give advice without a request, does not like praise and compliments in his address. He is somewhat gloomy and pessimistic, pointing out the impending dangers, but he is usually not listened to, although then he turns out to be right. If a crime occurs nearby, it is usually the first suspect.

SCORPIO – a great desire to gain weight in the team and influence it. Energy of immense power, a revolutionary course of action that overturns all laws. Thirst for transformation.

There are few friends. In a relationship with them, a person is emotionally vulnerable or prone to direct manipulation, exerting magical effects on them. At a low level, it is an anarchist rebel.