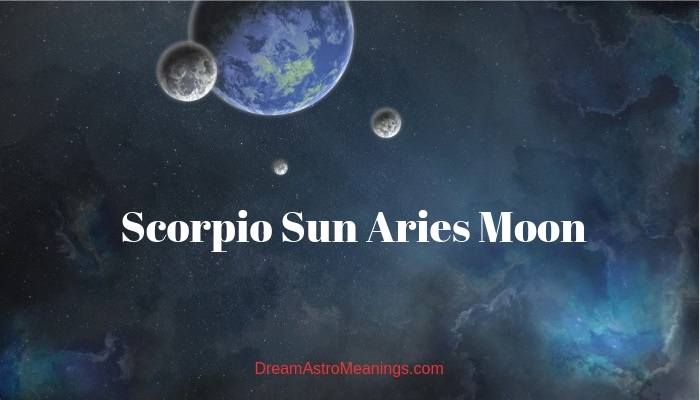 Our sun sign describes our outer personality, which are the traits most visible to the people from our surroundings.

People who are born with Scorpio sun and Aries moon have a strong and confident personalities.

These people have both their sun and moon ruled by the planet Mars. This often makes these people militant and prone to aggressive reactions and violence.

That can range from heightened voice while talking and a snappy character, to being prone to physically attack others when provoked.

These later cases are extreme, and usually happen when a person has bad aspects of their sun and moon, especially with Mars, Pluto, Uranus, or Saturn.

In these cases, the person might be prone to attracting people with violent nature as well as accidents in their lives.

The fortunate thing about these people is that they usually manage to have control over their reactions, due to Scorpio influence.

Those who are under the moon’s influence, could be prone to instinctive and uncontrollable reactions in situations where it would be wise to stop and think before taking action.

These people usually have powerful energy and can be dangerous opponents. They are often fearless, and they often choose a profession in some military field.

They could also be professional athletes. They are very enduring and physically strong. Many successful athletes have this sun/moon combination.

These people have a strong will and usually never give up regardless of the challenge ahead. They are motivated by difficulties and have a strong desire to overcome them.

These people are honest and direct and don’t hesitate to speak their mind and tell people what they think.

They are also able to handle criticism and remarks from other people. They can be egotistic and self-centered but not hugely.

Most of them can sense what other people are thinking and feeling. That ability helps them discover people’s intentions towards them and whether they lie to them or not.

These people cannot tolerate lies and deception, mainly because they have the ability to feel when someone is lying to them. They consider such behavior disrespectful and an insult to their intelligence and abilities.

People whom they cannot trust cannot be in their lives. That is why being dishonest and lying to these people is a sure way to get out of their lives.

They are ambitious and love being on the top. They are driven by success, and they have a strong motivation to succeed.

They always want to be better than others, but they are honest competitors and don’t use any forbidden and dishonest tricks to achieve victory.

They usually manage to achieve their goals and desires and become successful.

They usually need to work hard for their money, but some of them (especially the ones with good aspects of Jupiter and Pluto) could be blessed with incredible fortune regarding their finances and financial gains.

These people usually have strong leadership qualities, but in some cases, they could be overly demanding towards their subordinates.

They have high expectations and they expect these to be accomplished perfectly, which is sometimes too much for some people to handle.

Their energy is powerful, and they have a dominant character which people instinctively admire and often fear.

They are confident and don’t retreat before danger or any other obstacle. In some cases, these people could be incredibly brave.

Some of them are excited and inspired by danger and tension. They love overcoming obstacles and doing things which raise their adrenaline.

They also love to test the boundaries of their endurance, and often choose some exhausting sports, such as running marathons, participating in triathlons, decathlons, etc.

They are usually interested in secret matters of all kinds and attracted to different kind of secret knowledge and spiritual disciplines.

In some cases, these people could possess psychic gifts and healing abilities, which they use to help people.

The good traits of Sun in Scorpio and Moon in Aries:

The bad traits of Sun in Scorpio and Moon in Aries:

People with sun in Scorpio and moon in Aries are very passionate and energetic.

They are often magnetically attractive and often have a lot of suitors. They are usually good looking and have athletic bodies which people admire and are attracted to.

These people usually don’t have a problem approaching people they like, but they try to take their time to get to know their potential partners or spouses before committing to them.

Some of them are not that careful (especially men) and are prone to entering relationships (mostly physical) with many people.

These people are usually very passionate and need to satisfy their strong urges for physical intimacy.

They can be promiscuous and change partners frequently, but when they find the right person they usually stop with all activities outside their relationship or marriage.

Some of these people continue having affairs even when married or in a relationship, but not many of them.

They are reliable and organized and usually demand to be the leading force in the relationship or marriage.

In some cases, these people could be very intolerant towards other people’s opinions and prone to imposing their own regardless of the cost.

Their attitude can often cause a lot of problems in their intimate relationships but also in their friendships and family relations because no one likes to be treated that way.

People usually want their opinion to matter and be taken into consideration, especially in matters concerning them, and only a small number of people don’t care about that.

They need to try to become more tolerant of other people and their desires, especially if they are their partners or spouses; it is important for the longevity of the relationship.

These people are not very romantic and can be much uninspired when it comes to expressing their emotions to their partners or spouses.

They often appear very clumsy in the role of someone in love trying to express their emotions to their loved one.

Their nature is rough in general and they have a problem when they come to the field of emotions.

These people are direct and usually won’t waste time on romancing their potential partners and rather tell how they feel immediately.

Their ideal partner is someone who is very passionate, attractive, good looking, athletic, sports type, active, energetic, ambitious, confident, and doesn’t have a problem speaking their mind.

If a person knows what they want, that is the most attractive trait they could possess; besides being very attractive and passionate.

They need someone whose energy will inspire them to achieve more success. They want a partner they could do things together, and provide for their future as a couple.

Partners who have these traits are usually strong-willed and they usually could not be as tolerant to these people’s sometimes bossy behavior, so if they want to be with such a partner, these people need to become more tolerant and prone to compromises.

When they are in love with someone, they usually are. In most cases, though, these people end up with a partner who has a weaker personality than theirs because they have the need to be the leader in the relationship.

As spouses these people are organized and dependable. They are good parents, but sometimes overly demanding towards their children.

The best match for a sun Scorpio and moon Aries is another water or fire sign, but they could get along well with earth or air sign as well.

These people desire a partner with a strong personality, but usually end up with someone who has a weaker character because they want to be the dominant one.

It is preferable their partner to have some Scorpio influence in their natal chart.

People with sun in Scorpio and moon in Aries are confident people with powerful energy.

These people are very enduring and challenges don’t discourage them.

They get inspired when the circumstances are tough and they push even harder to accomplish what they have set their minds into.

They never give up and are real fighters. They are usually sports types and often actively practice some sports.

They choose sports which require a lot of physical strength and stamina. They enjoy pushing their boundaries and crossing their limits.

These people are usually good looking and have athletic bodies which attract many potential suitors.

They prefer partners who take care of themselves and the way they look, which means they need to be physically active and preferably practice some sports.

These people are very passionate and seek partners equally passionate.

They have strong physical urges and if their partner doesn’t have similar traits they cannot be satisfied in such a relationship.

They are honest and straightforward. They have the ability to sense what others think or feel, and this ability enables them to spot a liar instantly. They detest liars and also cannot forgive a betrayal of any kind.

They can be promiscuous while looking for a steady partner, and usually stop with side affairs when they get married.

Some of them continue with affairs even after seriously committing or marrying.

These people are powerful opponents and they shouldn’t be provoked.

They want to be leaders, and desire to be the first on all occasions. They can often be self-centered and egocentric.