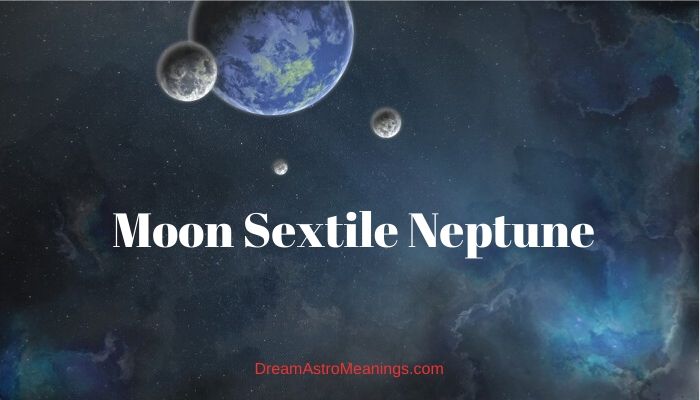 People have observed the stars and the movements of planets since ancient times, in an attempt to find out their meaning and influence on the life of people, as well as other situations and events.

Astrology is the ancient practice which deals with deciphering the relationships between planets and their meaning, as well as the influence on people and circumstances.

The aspects or relationships between planets have an important role in creating the person’s character and their destiny. Planetary placements in signs and houses are also very important for deciphering these details.

Aspects between planets are very significant when they are exact, which means there is no deviation from the exact degree of the aspect.

Aspects are formed when the planets find themselves at a certain angle from one another. Aspects can be harmonious and disharmonious and they can be major and minor aspects as well.

Sextile allows the two planets forming it to express their true nature without blocking their influence and energy.

This aspect helps the planets cooperate and create the person’s skills and talents in the areas ruled by the signs where these planets are placed. Sextile is an aspect connecting signs of complementary elements like air and fire signs and water and earth signs.

This aspect brings great opportunities into the person’s life giving them the chance to fulfill their dreams and goals, as well as to develop their talents and use them. Sextile enables growth and increase and brings good fortune to the person.

Although sextiles have beneficial nature and provide a lot of opportunities for progress to the person, these gifts can sometimes be contra-productive and cause the person to become lazy and lose their ambition and will to take action.

The person who is constantly presented by chances from life can begin missing opportunities knowing that new ones are coming.

That causes waste of time and talents and in the end might be the reason why the person fails at fulfilling their dreams or using their full potential.

Challenging aspects, although they can bring unpleasant events into the person’s life, sometimes can actually act stimulating to the person, keeping them focused on their goals and overcoming obstacles so they could finally succeed in their endeavors.

Sextiles and harmonious aspects in general, especially when a person has a lot of them in their natal chart, can bring too much good stuff into the person’s life which causes many people to begin taking these blessings for granted because they didn’t put any effort into acquiring them.

Sextiles formed in transits and progressions bring chances and opportunities for progress and fulfillment of desires. They often create encounters with people that could help us accomplish something we want or help us develop and use our talents.

The Moon is not a planet, but an Earth’s natural satellite. Nevertheless, the Moon has great importance in astrology and it strongly influences both people and events.

The general belief is that the Moon formed shortly after the formation of the planet Earth, around 4.5 billion years ago. The Moon moves around our planet in a motion that reveals only one side of it to the observers from Earth.

That means that only one side of the Moon can be seen, and the far side has never been seen. First people on the Moon were a part of an USA mission in 1969.

The Moon is ruling the sign of Cancer and is exalted in the sign of Taurus. In these two signs, the Moon has the strongest influence.

The Moon symbolizes the personal needs and main habits. It rules our subconscious and its content. The Moon in the natal chart reveals how the person deals with their daily issues.

The Moon symbolizes women in our life, our mother, and our motherly instincts. The Moon represents female energy and our relationship with the feminine side of our personality.

The Moon represents our caring and nurturing instincts and ability to take care of others, especially the ones we care about. It reveals how spontaneous we are.

The Moon also reveals how able and interested we are in taking care of ourselves. It represents our home and the amount of comfort we experience in our life.

The Moon can reveal how intuitive we are and whether we possess some psychic abilities.

The Moon is responsible for our mood, and those influenced by the Moon are known to be moody and have unpredictable reactions without a reason. The Moon also rules our emotions, memories, and past hurts. It rules our beliefs and prejudices.

If someone has a tendency to hold on to the past and hurtful memories, they probably have a strong influence of Moon in their natal chart.

People who have Moon as a ruler of their Ascendant or their Sun sign, or have their Moon placed on some angle of the natal chart, such as ASC/DESC or IC/MC are strongly influenced by the Moon, and they are especially sensitive to its progressions and transits.

These people are usually very emotional but also adaptable. They have a caring and nurturing nature, and tend to act protectively towards the people they love.

They can also be prone to unexplained mood swings and irrational reactions.

The placement of Moon in a certain sign or a house in the natal chart reveals the areas where the person feels most comfortable.

Neptune is one of the coldest planets in the Solar system with temperature of -218 degrees.

This planet is big and is mostly composed of helium and hydrogen. In its interior there are mostly ice and rocks.

It rules addictions of all kinds, such as alcohol, drugs, gambling, etc. It also rules mediums, psychic abilities, magicians, secret knowledge. It is the ruler of Pisces.

Neptune often creates confusion into people’s lives and situations. When someone is under a strong influence of Neptune this person usually expresses Neptune like qualities, like strong emotionality, dreaminess, artistic skills, or tendency of lying, manipulating others, confusion, etc.

Neptune ruled people can be excellent liars that could remain forever undiscovered.

When Neptune is making challenging aspects that can cause the person to prone to addictions or psychic illness. Sometimes this person is very naïve and others can easily manipulate them.

They have a strong connection to their unconscious and receive their answers from within. They possess vivid imagination and are usually very creative and artistic. They often select a career where they can express their creativity.

They are often interested in secretive matters and secret knowledge. They intuitively sense other people’s feelings and are able to help them using their compassion and nurturing qualities.

They often choose a profession of a social worker because of their ability to immerse themselves fully into the person’s problems and do their best to help them solve them. They have a kind heart and are very generous.

In many cases, these people possess healing powers and or can help others heal in some other way, through their compassionate nature and eagerness to hear about their pain so they could help them dissolve it.

These people are known to offer their help even when they are not asked to. They sense when someone is in need for their help and they jump in.

They genuinely care for the wellbeing of others and they feel bad when someone is not doing well in life or experiences some problems. They are idealists and imagine a perfect world where everyone can be happy and live a fulfilled life having everything they need and want.

Because of their ability to understand other people’s needs and burdens, these people are also prone to attracting negative energy of the ones they contact during their help missions.

It is important for them to learn how to protect themselves and cleanse the negative energy they have accumulated.

They also need to retreat from time to time to recuperate. They are often prone to self-sacrificing and feelings they are destined to help others in any way possible.

These people love music and are often musically gifted. They tend to express themselves and their feelings through some artistic or creative form, such as photography or painting.

They can be very romantic and dreamy and prone to deep and committed feelings for their loved ones. These people are loyal and would never abandon someone they care for.

Transiting Moon in sextile to Neptune is a short lasting aspect. This aspect could bring sudden inspiration to creatively express yourself or bring creative ideas into your mind.

It might indicate the beginning of a new creative project or it could indicate taking the time to take care of your loved ones.

In some cases, this transit might indicate meeting someone you could become romantically involved with. During this time your emotions and sensitivity are heightened. You could easily get hurt by someone’s inconsiderate remark or behavior.

During this transit you might be more receptive to the feelings and emotional states of those around you.

You might get in touch with someone who needs your support and help in overcoming some difficulties or emotional pain. Your intuition and psychic abilities might be heightened during this time.

If someone is negative in your vicinity you will feel that negativity stronger than usual and you might get the urge to remove yourself from this person’s presence.

During this transit you might feel generous and compassionate and reach out to someone who needs your help.