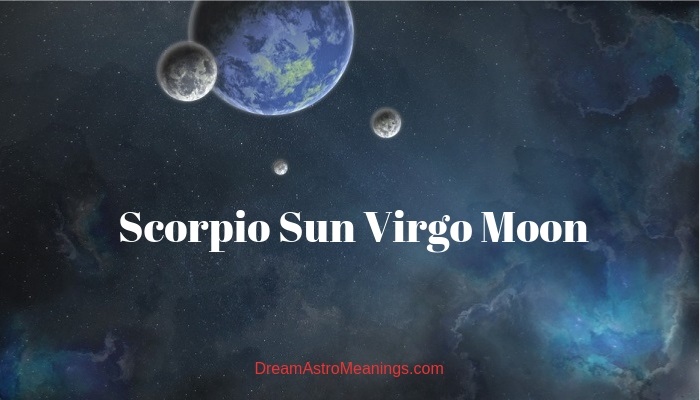 Our natal chart sun sign describes our outer personality and the way we tend to present ourselves to the people from our surroundings.

Our moon natal chart sign, on the other hand, describes our inner being, and our subconscious content, which are traits we tend to share only with the people we consider close and trustworthy, or we keep solely to ourselves.

People with sun in Scorpio and moon in Virgo have a personality which is a combination of water and earth element.

These people are down to earth, precise, and confident. They can be preoccupied with details and overly organized.

These people have a sharp eye for details and they don’t miss a thing. They are very discerning and a very good judge of characters.

They also have a heightened intuition which helps them understand the motives of people they deal with. These people have the ability to detect other people’s negative energy and move away from them.

They are very practical and don’t like wasting their money on useless things. They rather save their money and invest it in something useful which will, in turn, increase their income.

They are good with handling money and usually have a substantial amount stashed aside.

They are very rational and don’t waste their time either. They make sure everything is in its place and become very nervous when things are messy.

People who are disorganized and lazy also get on their nerves. They also detest sloppy people and people who don’t take care of their things.

These people are very focused on maintaining tidy their house and other spaces where they spend their time.

These people also take good care of their personal hygiene and make sure people from their close surroundings do the same.

These people are very direct and don’t have a problem saying all that’s bothering them regardless of the fact that their words might shame that person.

They believe that honesty is a virtue and they are bluntly honest. Many people get offended by their words and end every contact with them, but that usually doesn’t bother these people because they are not prone to changes that easily.

These people have some attitudes and beliefs which are difficult to change. They don’t change them because someone tells them to.

They need to make their own conclusions that things should be changed and that rarely happens because they are often convinced that they are unmistakable.

These people love to brag about how smart they are. The truth is that they are very intelligent and their mind is very inquisitive.

These people are curious and want to know everything, especially the latest news.

They also love learning new things, and are often very educated. Virgo gives these people an organized approach to things and they tend to organize everything and everyone.

When they begin organizing people from their surroundings that is when problems arise because most of them don’t want to be organized.

Most of them politely refuse their help, but in some cases conflicts arise because these people don’t understand easily when they need to back off.

They are hard workers and detest laziness. They are very energetic and swift to action.

These people almost never rest, and always have something to do. They are prepared to work long hours until their job is done, and are often considered best workers at their jobs.

They act the same around their house, and the members of their household often experience being organized by these people into group actions of cleaning or doing some joint activity around and outside the house.

People usually avoid confrontation with them because it is not easy getting out of a fight with them. They don’t back off and always need to have the last saying.

It is best to listen to them and do what they ask because it is easier than having to listen to their nagging and reproaching, and sometimes getting into an open argument with them.

These people don’t mind what others think about them and usually don’t pay attention to their remarks.

The good traits of Sun in Scorpio and Moon in Virgo:

The good traits of Sun in Scorpio and Moon in Virgo:

People with Scorpio sun and Virgo moon are rational and know what they want in their romantic life.

These people usually have a good sense of self-control and usually don’t allow themselves to enter into relationships with unsuitable matches.

Of course, there are always exclusions and people with this sun/moon sign combination who are getting into relationships without paying attention to the red flags.

These people are usually very practical and don’t waste their time and money on things that don’t have much sense or they don’t have use from.

For example, they won’t make a big wedding because they consider it a waste of money they could wisely invest in something else.

These people desire a partner who shares their skills with money; someone who is not a spendthrift and instead appreciates money and is able to provide a secure financial base.

They want someone they could build their relationship with and create something together.

They are passionate, but need a partner who is intellectually inspiring as well. They need to keep their mind occupied and a partner or a spouse they will be able to talk to for years without getting bored.

Infidelity and lies are something they cannot forgive and that occurring in their relationship or marriage is usually a reason for a breakup or end of the marriage.

These people are very proud and dignified. They value themselves way too much to tolerate a betrayal.

They consider betrayal proof of someone’s lack of emotions for them, and that is enough to release that person from their lives. They cannot be with someone they cannot trust.

Also, they consider infidelity and lying a great act of disrespect and underestimating of their abilities to discover the truth, and these people cannot accept that because they have such a high opinion of their abilities.

They are responsible and well-organized. Their mind is constantly making plans and organizing things. It is almost impossible for people from their surroundings to forget some choir because they keep reminding them.

They have a need to organize their partners as well and often dictate the things they will do together.

Their character doesn’t tolerate a person who has similar traits because they wouldn’t be able to get along well.

The best partner for these people is someone who doesn’t have a problem with being organized and told what to do; those are usually people who don’t like doing these things, and they consider it great because their partner actually loves doing something they don’t like at all.

These people are good providers and usually have a nurturing nature, although prone to nagging and criticizing.

Their partners need to have patience and tolerance towards their tendency to criticize everyone and everything, including them.

The main reason they do it is because they are usually convinced they know everything best which gives them the right to correct other people’s actions. People who don’t mind such behavior are ideal partners and spouses for them.

They are good in the parenting role, but can sometimes be overly demanding towards their children giving them way too many choirs or expecting too much of them.

The best match for a person with their sun in Scorpio and moon in Virgo is a Libra, Pisces, or Aquarius.

The main reason is these people’s tolerant nature which is able to put up with these people often very burdensome character.

They should preferably have some Scorpio and Virgo influence as well.

These people could get along well with partners of any sign, providing these partners are patient and tolerant enough.

People with sun in Scorpio and moon in Virgo are confident, rational, practical, and stable.

They are very intelligent, but also self-absorbed and egotistical. They often believe they know everything best, which makes them entitled to tell others what to do, or criticize their behavior.

These people often have problems with people and in their relationships because of these tendencies.

They are commitment types and enjoy putting up effort in maintaining the stability of their relationship or marriage.

These people are hard workers and don’t give up until the job is done.

They are very practical and know how to handle money. They enjoy saving it and investing it in useful things.

These people are passionate and desire a passionate partner; they are also intelligent and communicative, and they desire someone they could enjoy talking to.

They are good parents, but are often too demanding of their children.

They are very organized and usually lead organizers in their relationships and marriages.