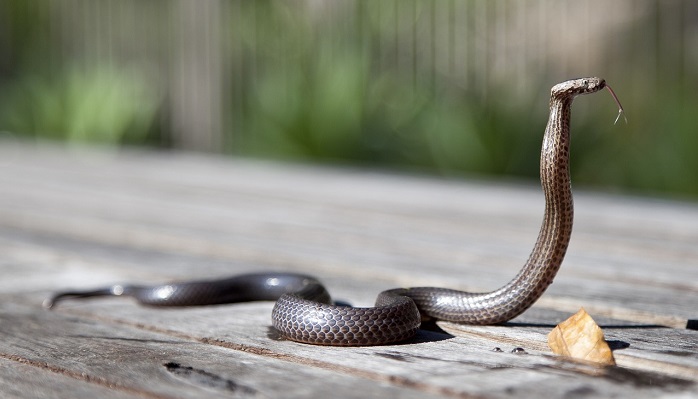 Throughout our history snakes have been worshiped and despised. Snakes have been put on pedestals of divine glory, they have been awed and adored, but also seen sinister, malevolent and genuinely evil.

There are various mythical concepts, legendary stories, folktales and superstitions featuring snakes and their mystical energy.

Dozens of superstitions, all around our planet, tell about what you should do or do not when you see a snake, how to react if it behaves specific way and so on. Today we are talking about a quite popular superstitious phenomenon of a snake crossing your path.

In certain cultures, snakes are seen lucky and fortunate spirits; in others, they are seen dangerous and dark creatures.

While there are exemplars amongst the snake world that are particularly venomous, strong and deadly to humans, snakes’ spiritual energy is seen dual. Overall, it is a magical and powerful spiritual energy.

Before we move on to spiritual and symbolical analysis of the phenomenon, let us find out something more on snake symbolism in general.

We will briefly go through basics of cultural and spiritual conceptions of snakes, in order better to understand the spiritual meaning of a snake crossing your path.

However, we should always have in mind that personal experience greatly varies depending on what is your opinion on snakes in the first place.

Snake symbolism has a very long history. Various accounts, archeological findings and anthropological data speculate about snakes being the first animal worshipped by humankind as a divine creature.

There are various legends and creational myths featuring snakes as powerful spirits and gods.

In different cultures, throughout history, there are numerous examples of snake gods or spirits playing essential role in creation of the world and its maintenance in balance and harmony.

Snakes are powerful spirit animals. They are always associated with concepts of life, longevity, cycles, transformation and change. 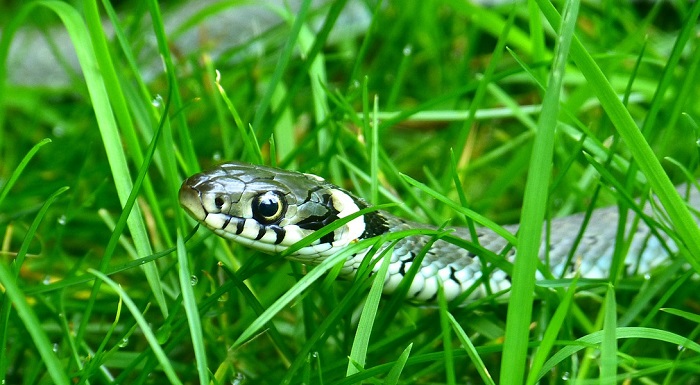 Perhaps one of the most astonishing information about worshipping of snakes are archeological findings in Africa. These relatively new findings support the idea of snakes being the first species worshipped by humankind.

According to this research, there are prehistoric findings that prove the existence of piton worshiping, in Botswana.

What is more important and surely striking, is that these findings originate from times more than seventy thousands of years far into past.

What many of early societies have in common are motifs of snakes as symbols of overall life and its cycles.

What makes snakes so spiritually powerful is their strange physical form. Strange to humans, at least.

Snakes bodies are, in metaphorical and spiritual way, endless. Prehistoric stone pictures often feature a representation of snakes as a simple line; one with no actual beginning or the end.

Symbols of snakes have been commonly used as symbols of overall existence and life on earth.

However, since these old times, symbolism of snakes has been growing, changing and taking many forms and additions. Thus, we have a great variety of all kinds of beliefs, myths and superstitions about snakes.

For example, Christian religion sees them devilish and evil.

Ancient Greeks considered snakes symbols of healing. In Chinese folklore, snakes are an important element of zodiac. In Ancient Egypt, snakes were gods.

We have given only a few examples to get the idea on variety of snake beliefs. What interests us more are snake superstitions. They are so many. In Ancient Egypt, people believed cobra was an incarnation of the powerful goddess Wadjet, the protector of all pharaoh’s land and people.

Therefore, it would of course be bad luck to harm it. You have probably seen an Uraeus; it is a cobra shaped decoration on pharaoh’s crowns.

Ancient Greeks identified snakes with concepts of youth, vitality and health. In Minoan culture, they had the Snake goddess; snakes were seen symbols of renewal, fertility and life. Shamanic traditions have always been in favor with snakes.

These reptiles have never been taken for granted. In Ancient Aztec and Mayan folklore, snakes represent dual nature of humankind, embodied in one of their most powerful gods, Quetzalcoatl, the ‘feathered snake’.

However, Christian tradition has always seen snakes as evil and demoniac creatures associated with powers of darkness and the Satan himself.

Speaking of snakes’ superstitions, there are many different and ambivalent beliefs. However, in most of pagan traditions, snakes are seen powerful spiritual beings, in the first place. One of particularly interesting folk beliefs comes from traditional, old Slavic lore.

In Slavic traditions, snakes are associated with the cult of the ancestors.

Old Slavs believed their ancestors guard and protect their home in a form of a snake.

This snake was sometimes described as completely white or a black one and it was believed it lives under the floor, beneath the central fireplace. Fireplaces in old Slavic homes were directly connected with the cult of the ancestors.

Usually, this magical snake was not to be seen. If it happens that you see it around your home, it means some misfortune would fall upon those who live there.

That said, snakes were seen protective spirits; they warn you before something bad would happen. However, in fear of bad events and misfortune, some people would kill the snake.

That could make things to happen even worse. Therefore, do not kill the snake; it might want to warn you and help you avoid negative events.

There are numerous other superstitions about snakes. We will just name several of the most common. For example, it is believed a snakeskin hanged from the ceiling would save the house from fire.

It is also believed snakes could actually hypnotize their prey before they kill and eat it. Their look is believed to be powerful and that it could turn you into stone.

In some parts of the world, it is believed that an emerald stone would save you from a snake’s bite. All over the world, there are numerous beliefs that claim snake powder has magical potential and that it could be used for healing.

For example, if a pregnant woman drinks a potion with powdered rattlesnakes, she would have an easy labor.

If a snake crosses your path

These were just a few examples on how consuming snake superstitions are. What about if a snake crosses your path? Is that an evil or a good omen?

It, of course, greatly depends on your own feelings towards snakes and of your cultural background. Well, if you are afraid of snakes, you are likely to interpret this phenomenon as something negative.

If you feel anxious and worried and a snake crosses your path, it could be a bad omen, in terms something you are expecting to turn out bad will happen exactly so.

However, you should not despair or think of a snake as a misfortunate creature; it only came to warn you. Snake spirit could be guiding and protective.

A snake crossing your path is usually an embodiment of forces that protect you; it is a destiny guide. If a snake crosses your path, it could mean that you should stay with your feet on the ground.

Do not over think things and do not fantasize too much. You should find a balance between your dreams and reality. This phenomenon is not meant to discourage you, but to make your mind clearer.

If a snake crosses your path very fast, it means you should grab opportunities in front of you.

This powerful spirit animal wants to tell you that all life is eternal, but also that a single lifetime is short.

You should praise everything you have in life and be grateful for all that you get. You should value every moment of your life.

If a snake goes slowly across your path, it symbolizes patience that is needed in everyone’s life. This snake spirit want to tell you you should slow down and do thing step by step, without rush.

That way, you will be able to see everything clearly, to widen up your perspective and possibly notice opportunities you would miss out.

A snake crossing your path could indeed be a good guiding sign, if only you learn how to interpret it. The problem is that most people are afraid of snakes, so they commonly misinterpret this phenomenon as a sign of something fully negative.

Do not be afraid of a snake that crosses your path; it probably only want to help you, in a metaphorical way.

Sometimes it happens that people stumble upon a dead snake on their path. It is usually seen as a fortunate sign. It means you will overcome difficulties troubling you and conquer your negative sides. It means you are capable of resolving things on your own and overcoming hard times.

A dead snake on your way is an omen of future success, new opportunities and well-being.

However, if you are the one to kill a snake on your way, it is not a good thing, no matter if it happened accidentally. You should ask the spirit of the snake for forgiveness, so bad things do not come your way.

If you kill a snake on purpose, you will face real troubles and negative energy.