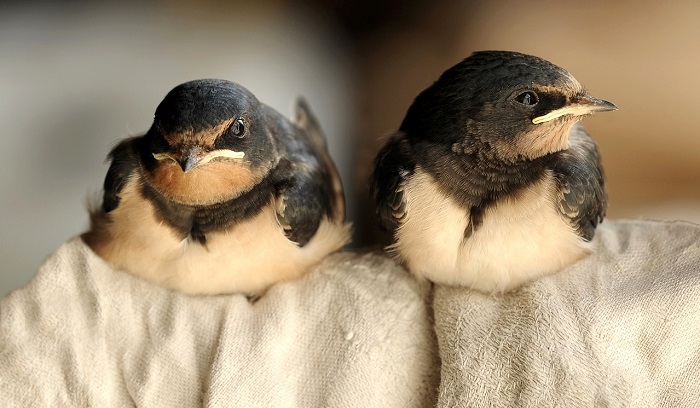 The swallow belongs to a family of birds spread all across the world, except Antarctica. There are 83 species of swallows, and the biggest variety of swallows is found in Africa. They are present in many oceanic islands.

Swallows are adapted to hunt insects in the air. They have bodies which are specially adapted for endurance and maneuverability. Swallows have sharp sight which they use to find their prey. Their eyes are also very long which enables their visual acuity.

They are around 10-24cm long and around 10-60g heavy. They have specially designed tails which enable their maneuverability. Males have longer tails which they also use to attract females.

Although they are great flyers, they can also walk and run.

Swallows are widely spread, and they live in different habitats. Because they feed on flying insects, and they usually find them over lakes and waterways, these places are some of their preferred habitats. They also live in open habitats like the grasslands, open woodlands, marshes, savanna, shrublands, mangroves, etc. Swallows are able to live in different altitudes.

Many swallows live in habitats where there are human activities, usually agricultural.

Swallows are great flyers. Some species are territorial, and some are not.  The males usually choose their nesting site and then they attract a female to join them.

They form large flocks to protect themselves from predators. They sometimes roost in a community for similar reasons.

There are social and non-social species of swallows. The chicks stay with their parents for some time after the breeding season is over. Swallows tend to be very aggressive when defending their nests.

Swallows catch their prey in the air. They choose large specimens and don’t eat every insect which happens to pass by them. They also avoid insects which might harm them in some way, such as stinging insects like the wasps and the bees. Sometimes swallows eat fruit and other plants.

They are very agile while flying and can maneuver skillfully when they hunt for prey. 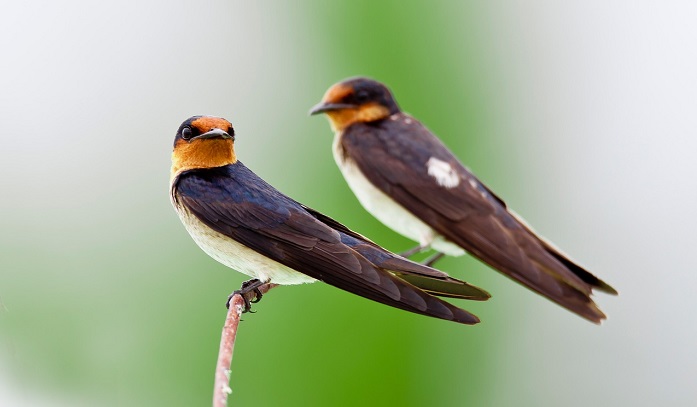 Both the males and the females participate in building the nests or digging the burrows for nesting.

Pairs of swallows who are mating are monogamous. Non migratory pairs tend to stay around their nesting area throughout the year. The migratory species tend to return to the same breeding area and nest there every year.

Swallows aggressively defend their eggs from predators. Male swallows have a significant role in parenting the chicks. The average clutch is up to five eggs in temperate areas and up to three in tropical areas. In some species, both males and the females do the incubation, and in others, only females do that.

Even if it doesn’t participate in the nesting, the male will sit on the eggs while the female is away for a while to prevent or reduce heat loss in the eggs while she is gone. When they hatch, the young swallows are naked, and their eyes are closed.

Their parents keep them warm until they grow their own feathers and become able to thermoregulate. They don’t develop as fast as other similar birds. Their parents feed them with boluses of food which contain up to a hundred insects.

They fledge the nest usually after three weeks, but they return to roost.

Swallows produce different songs which they use to communicate with each other or to express their emotions, such as excitement or fear.

They have different songs when they court the females or when they want to alarm others about a predator close by.

Females have the ability to judge the physical condition of the male by listening to its song and based on that decide whether to mate or not.

What does a Swallow Bird Symbolize?

Swallows are beautiful birds, and some wonderful symbolism is related to them.

For the Chinese and the Japanese, the swallow is a symbol of fidelity, fertility, good luck and prosperity.

The European people see the swallow as a messenger of spring, love, and happiness.

The swallow bird totem has many different meanings. Here are some of them:

Fidelity. Swallows tend to spend their lives with one mate. Their main characteristic is fidelity. The swallow totem shares this trait with you. You are a faithful person, and you nurture and respect the relationship you have with your partner. You openly express your love for your partner.

Protectiveness. Swallows are very protective animals, and they could become aggressive if needed. The swallow totem gives you this trait as well. You know how to protect what is yours, especially the people who are close to you.

Parenting. Swallows are one of the best parents in the bird kingdom. Both the female and the male take care of their chicks, and they do it with great care and devotion. If you have a swallow as your totem animal, you are most likely very nurturing and caring towards your children.

Community and isolation. Some swallow species are social, and some are not. This totem animal is giving you the gift of knowing when is the right moment to be a part of the community and participate in its activities and when is the time to retreat and do your own thing. You know the importance of the group you belong to, but you also know the importance of respecting your personality and your personal needs, which usually come before the requirements of the people around you.

The Swallow as Your Totem Animal

The swallow as your totem animal gives you many beautiful gifts.

You are a very caring and nurturing person, and you fiercely protect the ones you care about, especially your children.

You are agile and capable person with many skills which you use to achieve your goals. You are a graceful person with a distinctive style many people admire.

You also enjoy living in a pleasant environment, and you pay a lot of attention to your home arrangement.

What if a Swallow Appears in Your Life?

If you suddenly begin swallows, that has a specific meaning for your life. it is important to pay attention to the circumstances when you encounter the swallow. This bird could be there to remind you of the importance of communication.

Talk to other people, especially to the ones that are close to you about your desires and wishes.

People usually don’t read minds, and it would be useful if you simply told them what you need so you would all be satisfied.

The swallow might appear in your life to remind you to be more appreciative of your relationship with your partner and express your love and gratitude for being a part of your life.

Don’t jeopardize what you have for a temporary infatuation about someone. Swallows can be a calling to involve more in the matters of your community. It could be a reminder of how important your community is for your life.

Sometimes a swallow can be a reminder to start being more independent and rely on your abilities, instead of always relying on other people, such as your parents, your spouse, siblings, friends, etc.

When to call on a Swallow?

You should call on a swallow as your spirit animal when:

Dreams about Swallow – Interpretation and Meaning

Dreams about swallows are not very common, but they usually have a good meaning.

Swallows symbolize new beginnings and renewal, and that could be the meaning of your dream.

You might experience leaving the past behind to create space for new beginnings in your life and opening a new phase which will significantly improve your life.

If the swallows were building a nest in your dream, that could indicate solving some problems soon, or sometimes it could be a sign of going to the next level of commitment in your relationship, such as beginning a life together, marrying, etc.

A swallow flying away could be a bad sign indicating some bad news you could soon receive.

If a swallow entered your house, that is a good sign, indicating success in solving your current problems.