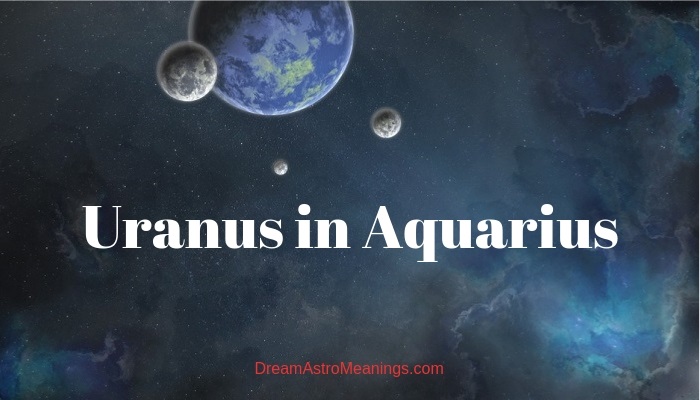 Uranus is the planet seventh from the Sun, with the fourth-largest mass in our Solar system. This planet has a similar composition to Neptune’s. Contrary to Jupiter in Saturn which are made mostly of gas, Uranus is predominantly ice, and it is considered the coldest planet in the Solar system, with temperatures of -224°C. Its exterior is made of layers of clouds while its interior is mostly rocks and ice. This planet is composed of rings, and has 27 moons.

In the literature of the ancient Greeks, Uranus was the father of the skies, and was the husband of Gaia, Mother Earth. In some sources, Uranus was conceived by Gaia and was her son, while in other sources Uranus was considered the son of Aether, the god of the upper air and heavenly light. Uranus and Gaia are considered the ancestors of most Greek gods. They were the parents of the Titans and Cyclops.

In astrology, Uranus rules unexpected awakening events which usually change our lives to the core. It is also the planet of geniality and geniuses. This planet symbolizes a person’s ability to construct something useful and rules discoveries of all kinds. It is the ruler of inventions and inventors. It rules originality and original thinking.

It is also the planet which rules air, aviation, airplanes, pilots, all mechanic work related to airplanes, airplane mechanics, airports, air transport, and air travel. It also rules adventure and all kinds of action. Uranus rules extreme sports and activities and people who are into such activities. In general, it is the ruler of sports, sporting events, sports stadiums and clubs.

It also rules bicycles, bicyclists, and bicycling. It rules buses, bus travel, and bus drivers. It is the ruler of railroads, railroad transport and workers, as well as railroad stations. This planet rules travel and travelers.

Uranus rules sudden, unexpected events, abrupt changes, unexpected reactions, and abruptness in general. These events are usually negative in nature (although it is not a rule). Accidents are under the rule of this planet too.

This planet rules revolutions and rebellions and all kinds of rebellious people and people who have a tendency of opposing authorities. It is therefore the ruler of anarchy and anarchists, and all kinds of boycotts, protests, and demonstrations. This is a planet of disobedience and disorder.

It also rules assassination attempts. It rules fanaticism and all kinds of fanatics, as well as heresy and heretics. Uranus is also the planet of freedom and desire for freedom. It rules reforms, reformation, and reformers. It also rules impulsive behavior.

Uranus is a planet which rules changes, especially the sudden ones. It is also the ruler of new beginnings and creations.

This planet is often the main culprit for many wrecked relationships and marriages because when in bad aspects to personal planets often causes unfaithful behavior and adultery which leads to break-ups and divorces. It rules divorces and divorcees. This planet rules separation in general.

Astrology is ruled by Uranus, as well as all astrological counseling, astrologers, astrological literature, and everything else related to astrology. Uranus also rules astronomy, and astronomers.

Because it is the planet of destruction, destructiveness, and destroyers, it also rules dynamite, bombs, bombers, and bomb attacks, as well as bomb explosions. Uranus rules all kinds of catastrophes where mass destruction takes place, like earthquakes, volcano eruptions, etc. If badly placed in a natal chart, Uranus can indicate a sudden death, or death in an accident.

Uranus is also the planet of authorities and people in authority, bossy people, tyrants, etc. It also rules eccentric and unpredictable people. It is the planet of extremes, both good and bad ones. It rules freelancing and freelancers.

The planet Uranus also rules healing and healers. This planet rules psychoanalysts and psychoanalysis, as well as psychotherapy. It rules the nerves and the nervous system, as well as nervous disorders.

Uranus is a planet which inspires civilizational and cultural development, as well as transformations within generations and the society in general. Uranus rules the sign of Aquarius. It takes a period of around seven years for Uranus to go through a sign, and influences all the people born within that time span.

Because of that fact, Uranus in the signs doesn’t have an impact on individuals, but on generations.

That is why, when determining its influence on an individual, it should always be a combination of the sign, house placements, and the aspects it is making.

Also, transits of Uranus which make contacts to your natal planets and houses can point to the moments in life when significant events and transformational changes will take place, and should always be taken into consideration when examining Uranus’s influence.

Its influence on generations of people is often through different discoveries which benefit the humankind, innovations, changes in perception, change of styles, etc. Most people don’t sense its influence while transiting through signs on a personal level because the planet itself isn’t making any aspects to their natal charts.

These transits often bring unwanted and sudden events in a person’s life, which cause massive transformational changes they benefit from in the future.

If Uranus is in good aspects with the person’s other planets, it usually brings abrupt, but fortunate events and changes in their life. If the aspects are bad, Uranus usually brings events and situations which are bad in nature, but their severity and influence on a person will depend upon different circumstances, mostly from the importance of Uranus in their natal chart.

In the text, we are giving data about some general traits of people born under the influence of Uranus in Aquarius.

Men born with Uranus in the sign of Aquarius are idealists, always in pursuit of some new, seemingly impossible goals.

If something more interesting and inspiring appears, he might give the previous pursuit and begin following this new dream.

These men value their friends’ opinion and often base their decisions and actions upon their friend’s support. He likes to talk about his plans and goals and appreciates the opinion of the people who are close.

Women with Uranus in Aquarius (like the man with this placement), are very intelligent and have unique thinking patterns.

These women (and men) are very unpredictable and usually don’t follow any conventions and have a tendency to disobey rules. These women don’t care what others think about them as long as they do what they desire and move towards their goals.

Some of the good traits of people born with Uranus in Aquarius are:

Some of the bad traits of people born with Uranus in Aquarius are:

– absentmindedness, loss of focus, change of opinion, change of goals, lack of persistence, fighting authorities, making their own rules, disrespect of rules, egotistic, superiority complex, imposing their opinion and way of doing things to others, aloof, detached, and unable of multitasking.

They are also stubborn, and desire to do things their way, regardless of the situation.

In the sign of Aquarius, Uranus is at home. Uranus rules this sign. Aquarius is the ruler of eccentricity, unpredictability, sudden and unexpected events.

It rules a sign that rules inventions, innovations, super intelligence, and genius people.

Uranus in Aquarius people are very intelligent. They are focused on progress and finding new ways of doing things. These people are usually not very emotional and often appear distant, impersonal, and detached.

On the other hand, these people sincerely enjoy helping others, regardless of whether they are strangers or people who are close to them. These people are true humanitarians and very compassionate.

They have a unique way of thinking and doing things. Most people don’t understand their uniqueness and consider them weird. They don’t care what others think of them and do what they consider is right for them and what makes them happy at the moment. They always seem to find the best solutions to the most complex problems.

These people are often rebels who don’t like authorities and don’t like being told what to do and even worse, how to do it. They are inventors who help create things which will benefit others and sometimes humanity as a whole.

These traits mark a whole generation of people born during Uranus’s reign in Aquarius. They live an important mark with their deeds for the next generations to come. They are often focused on finding a solution to a global problem, which will benefit humanity when solved.

These generations of people are usually open-minded and free-thinkers. They don’t like to be burdened by the social norms and “the way things are usually done”. They are visionaries, introducing changes in all areas of life.

The period of Uranus transit through Aquarius is usually marked with great technological and evolutionary changes. It is often marked with massive movements for fulfilling some important humanitarian goal.

These periods can be a time of big revolutions and wars and fighting against the oppression of tyrants.

People with this Uranus placement are truly generous and selfless about helping others.

They are friendly and open, and usually have a lot of friends and acquaintances. They love socializing and discover unique ways way of having fun.

These people as a generation say goodbye to the past stagnant beliefs about life, relationships, the way of doing business, work, having a family, and introduce their own unique beliefs and attitude, which in time become new globally accepted standards and way of doing things.

Uranus is a transpersonal planet and spends around 7 years in one sign. Because of that fact, its transit through a sign influences whole generations of people.

Its influence on a person should be determined by combining the sign Uranus is in, the position of Uranus in a natal house, and the aspects which it makes with other planets in the natal chart.

The position of Uranus in Aquarius makes generations of people who are very intelligent and true visionaries. They are the ones who make the changes in the world through their discoveries and a new way of doing things.

These people cut the ties with the past because they refuse to obey traditions and social rules; that is why, they end up making their own rules which in time become new standards of doing things.