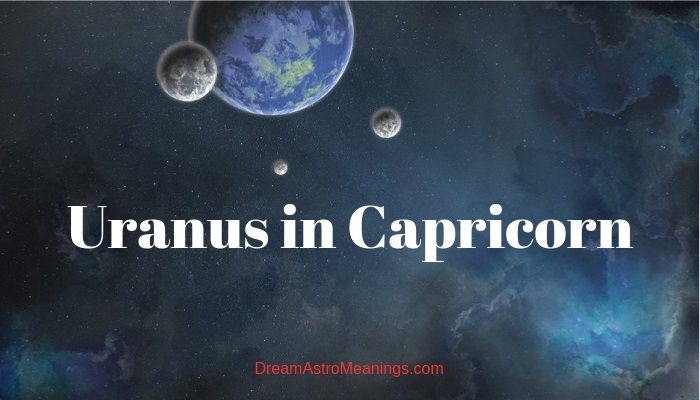 Uranus is the planet discovered by the astronomer William Herschel in 1781. It is relatively heavy, and has the fourth-largest mass of all the planets in our Solar system. It is the coldest in our Solar system because it is made mostly of ice, with a temperature of -224°C.

The name Uranus comes from the Greek god Uranus, the god of the skies. This god was the father of the Titan Cronus and grandfather of the god Zeus. Uranus and Gaia, Mother Earth, were the parents of the Titans and the Cyclops, and they are considered the ancestors of most of the Greek gods.

The planet Uranus in astrology is considered the ruler of sudden, unexpected, and life-changing events.

These events usually have the purpose of transforming our life and bringing favorable changes, and in some cases they could represent endings of things which don’t longer serve us. If severely badly aspected, Uranus could bring disastrous events in our life.

These events usually come as a lesson for resisting some changes, refusing to accept some change, insisting on old behavioral patterns and beliefs, etc.

Like all transpersonal planets, (Neptune and Pluto being the other two), Uranus influences our lives in a way to avert our attention to parts that need to be changed and transformed. If we neglect the signs and the messages it is trying to convey to us, we will most certainly experience its effect often in a brutal way. In some cases, if we happen to wait too long, the consequences of its influence could be irreparable.

Uranus rules sudden insights, and genius discoveries. It is the planet of inventors and inventions. If prominent in a person’s natal chart, it could indicate a genius able to make discoveries which will benefit humanity.

Many famous people who have made discoveries of world importance have a prominently positioned Uranus in their natal charts. It is the ruler of humanitarianism and humanitarians. This planet rules the original way of thinking and originality in general.

Uranus is also the ruler of all means of transportation and travel. It especially rules air transport and travel, airplanes, pilots, airplane mechanics, airports, etc.

The planet Uranus is also the ruler of sports and all sports activities, especially extreme sports. It rules sportsmen, sports clubs and stadiums, sporting events, etc. People ruled by Uranus are usually into extreme activities of any kind.

Uranus symbolizes freedom and desire for freedom. People with prominent Uranus care for their freedom very much and can’t stand any kind of restrictions. These people usually avoid committed relationships because they know that they cannot stand the pressure.

Uranus also gives a tendency to cheating and infidelity in relationships, especially when it is in bad aspects to Venus or Mars, and/or Sun, and the Moon. These people are prone to sudden endings of relationships and marriages because of their cheating tendencies, or because they are being cheated on. It symbolizes break-ups and separations, and divorce.

Uranus is the ruler of the destructive power of things. It rules destruction, destructiveness, bombs, bomb attacks, bombers, etc. It also rules natural disasters, such as volcano eruptions, earthquakes, and other catastrophes with disastrous consequences.

Uranus is also the ruler of sudden death and accidental death.

This planet rules electricity, electronics, electrical engineers, all electrical appliances, and their manufacturers and dealers. It rules engineers and mechanics in general. It rules magnetism, especially personal magnetism.

This planet also rules authorities, tyrants, bossy people, and all people with similar traits. It is also the ruler of all eccentrics and unpredictable people. Uranus rules extremes of all kinds.

The influence of Uranus is in its effect on the development of our civilization. It inspires the transformation of beliefs in whole generations. This planet rules the sign of Aquarius and is the most potent when in this sign. Uranus spends around 7 years in the same sign, and that is why its influence in different signs is almost insignificant on individuals and it can really be seen as a collective influence over the generations of people.

Uranus’s influence on individuals should be seen through a combination of the sign, house of its placement and the most important, aspects it makes with other planets. For its influence over an individual it is also important to consider its progressions and transits, where it makes significant aspects to other planets or other planets make with a person’s natal or progressed Uranus.

Uranus influences generations mostly through different inventions and discoveries which are beneficial for humanity as a whole. Often it manifests through a change in beliefs or perception people as a whole have, global change of style, etc.

Most of the people don’t feel the influence of Uranus transiting through signs and this transit could only be felt as a combination of different influences in a person’s natal chart related to Uranus.

The ones who are the most sensitive to Uranus’s influence are people who have a prominent Uranus in their natal chart, usually through a house or aspect placement combined with the rulership over a personal planet or significant point of the natal chart.

Especially the ones with badly placed natal Uranus should be careful about transits and progressions to this planet because that is when the highest risk of potentially life- changing and threatening events could happen and the person should be prepared to try to avoid or prevent the severity of the consequences. It’s important to note that some Uranus events are inevitable and its consequences could not be prevented or amended.

In the article, we are talking about general traits of people born under the influence of Uranus in Capricorn.

Men with Uranus in Capricorn are usually business-oriented and focus on achieving their goals.

They often have an unusual approach towards accomplishing their plans and they don’t hesitate to make the necessary changes along the way. They are prone to changing the traditional way of doing things and achieving success.

They have prominent managerial and leadership skills, and have an ability to attract masses and their attention and trust. That is what makes them good politicians and other world leaders.

They are financially well of and know how to invest cleverly to get the best gain.

Women with Uranus in Capricorn tend to have a serious approach to creating their future success.

They are reasonable and reliable although they might appear eccentric and unpredictable at times. They are prone to making changes to traditional ways of doing things and they usually have an unusual but unique way of solving problems.

They are determined to succeed and they have the perseverance to follow their goals. They have a gift of inventing new things and don’t hesitate to break some rules if needed to achieve what they want.

Their discoveries in time become a thing of tradition, although they were considered something eccentric and unacceptable at first.

Some good traits of Uranus in Capricorn are:

Some bad traits of Uranus in Capricorn are:

In the sign of Capricorn Uranus exhibits traits of ambition and entrepreneurial spirit. People born within the period of Uranus’s rulership in Capricorn in general display Capricorn traits and are usually serious and very responsible.

It is also the sign of matters related to the construction of buildings, such as building materials, builders, and architecture and architects.

It is the ruler of real estate, as well as real estate agents and dealers. It also rules civil and industrial engineers. Capricorn rules economy and economists, counselors, buyers, and dealers of goods, etc.

These people as a generation have a good sense of investing in prosperous deals and making the most of their money. They have the determination and persistence required for the success of their goals, especially in fields ruled by Capricorn and Uranus.

These people are both rational and unpredictable. However, most of them never allow their actions to jeopardize them or anyone else.

They think well and act fast. In some cases these people can have an eccentric personality. They could also be stubborn and need to have the last say in every situation.

In some cases, these people could be prone to rash decisions and changes which are not in alignment with their rational and thoughtful nature. These people have a determination to succeed and are not afraid of taking risks and making the necessary changes along the way to get where they want to be.

These people strive towards power and success and often reach high positions in the area they choose. They instill confidence in others and people are glad to follow them. If necessary, they don’t hesitate to make improvements in their actions and change things that don’t prove to be useful or give the desired results.

They could achieve great success as politicians or world leaders in some other areas. The public loves them and they could also be renowned public figures which people follow and trust.

The generations of people born with Uranus in Capricorn are very logical and sharp thinkers.

They are excellent business leaders who earn their way to success through their persistence and careful actions. These people usually manage to achieve substantial financial gain and reward for their efforts and work done.

These people are either conservative or have a revolutionary spirit aimed to make changes in society and end with the past way of thinking and doing things. They are not disrespectful of the past, but they tend to make the most of it, and change the parts that are outgrown and not adequate for the present moment.

These people are often traditional and have a practical approach to things. If something is too complicated they are usually inspired to find a better and more practical solution to do it.

These people make changes which tend to become a new tradition and last a long time.

These people have an original approach to business and money making and usually make the most of this ability.

The planet Uranus is one of the three transpersonal planets, which transits through a sign during a span of seven years. That means that people born within these seven years share the traits of Uranus in that specific sign. Its influence in different signs is collective rather than individual.

When we want to determine the influence of Uranus on a certain individual we should always consider its sign placement, house placement, as well as all the strong aspects it is making with other planets in the person’s natal chart.

People with Uranus in Capricorn are very intelligent and usually have a serious approach towards things.

They are excellent problem solvers and always have a unique way of doing things, usually changing the traditional one which was in use till then. They often appear eccentric and can have a rebellious nature, although they usually don’t allow that prevent them from achieving their goals.

They have excellent leadership qualities and ability to influence masses. That makes them excellent business leaders, politicians, and leaders in other areas.