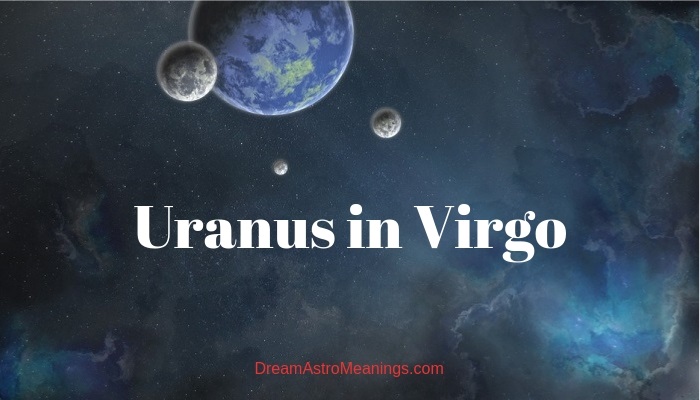 The planet Uranus is mostly composed of ice and rocks, and having a temperature of    -224°C is the coldest planets in the Solar system. The name of this planet is the name of the Greek god Uranus, god of the skies and one of the oldest ancient Greek deities.

Uranus and Mother Earth, Gaia, according to the Greek myths are considered parents of the Titans and Cyclops. In some myths, Uranus is considered both the son and husband of Gaia.

Astrologically, Uranus is the planet of the unexpected. It is also the ruler of changes and transformation. Being a transpersonal planet, Uranus rules the transformational change of our civilization and culture. This change occurs through a change in global perception, beliefs, style, acceptable behavior, etc. This planet rules endings which create space for new beginnings.

The planet Uranus is also the ruler of geniality and geniuses. It rules incredible new discoveries and innovations which benefit humanity. It rules people with enough creativity and intelligence to make revolutionary progress in different areas of life which other people then follow. This is the planet of originality and original creations.

Uranus rules all kinds of transport and transportation means. It rules airplanes, cars, buses, trains, motorcycles, bikes, etc. It also rules the drivers of these vehicles and the mechanics who repair them. This planet also rules car dealers and racers.

This planet is the ruler of extremism in all forms. It rules people with extreme behavior, extreme sports and all kinds of extreme activities. This planet rules sport in general, and all sports activities, sports events, sports clubs and stadiums, sports games, sportsmen, etc. It rules traveling and travelers, especially by air. Uranus is the ruler of sudden and unplanned journeys.

This planet rules surprise, unpreparedness, all kinds of unexpected events and reactions, and abruptness. The events caused by Uranus’s influence usually have a negative nature but their consequences don’t always have to be bad. This planet, like all transpersonal planets brings powerful lessons into our life.

When Uranus strikes with its disastrous events, nothing is ever the same. People go through powerful personal transformations after experiencing Uranus ruled event. Until the lesson is learned, Uranus keeps striking at us with more force and severity. This planet is the ruler of all kinds of accidents, often with severe injuries or a deadly outcome.

Revolutions and all kinds of rebellious acts and people are under the rulership of the planet Uranus. This planet rules people with a tendency to oppose authorities.

It rules revolutionaries, anarchy and anarchists, fanaticism and fanatics, assassinations and assassins, heresy and heretics, reforms, reformers and reformation, boycotts, demonstrations, and protests. It is the ruler of impulsive behavior, disobedience, and disorder. It also rules independence and the desire for freedom.

This planet rules separation and endings. Bad influence of this planet is often the main cause of relationship break-ups or divorces. People with strong negative aspects of Uranus, especially with Venus or the Sun, often experience sudden endings of their relationships or marriages, usually due to infidelity or lack of freedom of one of the partners. Uranus is the ruler of relationship endings and divorce.

Uranus is the ruler of natural disasters as well as caused by human influence. It rules earthquakes, volcano eruptions, and other natural catastrophes, and their victims. It rules all kinds of destructiveness, destruction, destroyers, bombs, dynamite, bombers, bomb explosions and bomb attacks.

It rules astrology and astrologers, astrology counseling and literature, and all other matters related to astrology. Uranus also rules astronomy, astronomers, as well as astronomical research. It rules magnetism, magnets, and personal magnetism.

Uranus is also the ruler of people of authority and in position, people who have power and influence over other people, tyrants, bossy people, etc. This planet rules extremes of different kinds, unpredictable people and eccentrics.

The planet Uranus is one of the planets which influence the evolution of humanity, and the development of our civilization and culture. It influences changes in our society. This is a transpersonal planet, which means that it influences generations of people and is the cause of global transformation.

It transits through one sign during a span of around seven years, which means that all people who are born during that time span share the same traits. Its influence on these people is indirect and it manifests as a global change in people’s beliefs, perception, behavioral patterns, accepted behavior, etc.

When we want to discover the influence of Uranus on a certain individual, besides its sign, we should consult the placement of Uranus in a certain house of the natal chart, as well as all the aspects Uranus is making with the planets of that chart, especially the negative ones.

We should also take into consideration the current transits and progressions involving Uranus. They point out the moments when significant events might take place in a person’s life.

Not all people sense Uranus’s transits and progressions with the same intensity. Its influence is mostly felt by people who have a prominent Uranus in their natal charts, especially when these positions are triggered by progressions and transits.

These people have Uranus as ruler of their chart (Sun or Ascendant ruler), have Uranus placed in a prominent house, or on the house cusp (the beginning of the house), or Uranus in strong aspects to other planets.

Good aspects of Uranus usually bring fortunate changes in a person’s life, while bad aspects usually bring misfortunate events and abrupt negative changes. The severity of the occurring consequences will depend upon the importance of Uranus in that person’s natal chart.

In the article below, we give data about general traits of people born with Uranus in Virgo.

Men with Uranus in Virgo are precise, detailed, and sometimes focused on discovering something which will benefit a lot of people, especially in the field of medicine and healing.

These men have a thorough approach to things; they are patient and determined to achieve their goals.

They are sensitive to injustice and often fight for the rights of some minority or oppressed groups of people. They can be perfectionists with an excellent eye for details.

These men often lead a very healthy lifestyle and are active promoters of this kind of living.

Women with Uranus in Virgo are responsible and very organized.

Their talent for organization and responsible approach makes them excellent for jobs where these abilities are required.

These women don’t have a problem doing a boring or routine job, and are excellent office workers, civil servants, librarians, etc.

They are often involved in the service business, as workers or owners of these businesses. They are very helpful and enjoy making people satisfied. They often choose some medical profession and they have an innovative approach towards doing their job, always introducing some improvements.

Some of the bad traits of Uranus in Virgo are perfectionism, stressed out, anxiousness, critical, criticizing, etc.

Virgo is the ruler of perfection and perfectionists; it rules administration and administrators, accounting, account and accountants.

This planet rules organization and people with great skills for organizing.

People with Uranus in the sign of Virgo tend to be extreme perfectionists or quite the opposite. They are often involved in the discovery of some new technologies which are beneficial to a lot of people.

These discoveries are usually a product of a thorough and time-consuming research process.

These people are often prominent human rights fighters. They are often involved in some civil rights movements or they make individual efforts to protect the rights of people or some minority groups in society.

They often bring some innovations in the areas ruled by the sign of Virgo, especially in the field of medicine and healing people. They can be the inventors and creators of some new approach to healing some diseases or discover some new ways of medical treatments.

If they are in the medical profession, they often have some non-conventional approach to treating their patients. They are usually the promoters of a healthy lifestyle, healthy eating, exercising, organic food, etc.

They also make successful scientists able to make scientific discoveries which benefit humanity and even have a transformational effect on society.

They are intelligent and have a practical approach to things. They always come up with the best ideas and solutions for their problems. They have a gift of noticing details and finding weak spots.

Uranus in Virgo people are detailed, analytical and have a gift for organizing. They have a gift of seeing the whole picture of things along with all the details. These people are self-aware and confident, but usually don’t have the need to point out that in public and brag about their achievements. They do love to be appreciated for their work though.

They tend to be critical and have a critical approach to things, which often enables them to discover potential issues and problems, but in some cases creates problems in relations with other people who don’t like to be criticized even when they know that they are wrong.

They have a nature of a true researcher and they have the patience to get the job done regardless of how long it might take.

They are very responsible and finish their tasks on time. People can rely on them which earns them great respect for their coworkers but their superiors as well. They always make sure their work is perfectly undertaken.

These people are good for any kind of administration and office work. They usually don’t mind doing a boring job.

Uranus spends in one sign around seven years. That means that the people born during these seven years share its traits. This is a transpersonal planet, which influences generations rather than individuals.

To determine the influence of Uranus on an individual, it is necessary to consider the placement of Uranus in the natal chart as well as the aspects it is making.

It is also important to consult the current transits and progressions to determine when the major transformational events might take place.

Uranus in the sign of Virgo makes responsible and practical people, who are focused on using their abilities on discovering something useful and practical, especially in the field of medicine and science.

This position often influences some beneficial medical discoveries and changes in the treatment of some diseases.

This position of Uranus inspires fighting for the rights of minorities or some oppressed groups of people. It makes people born under its influence patient and detailed.

They love helping people and often choose a profession in the services business.