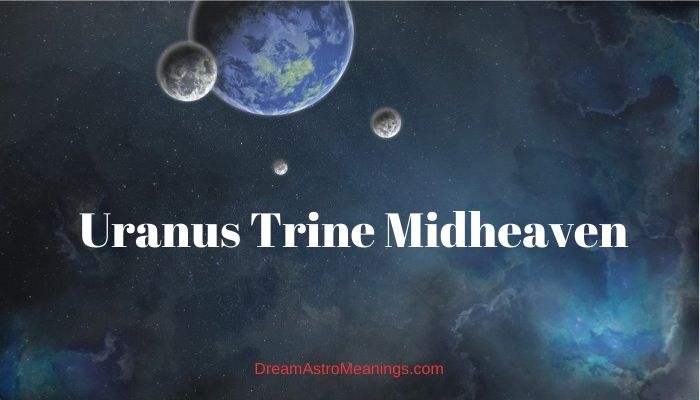 Uranus is linked to rebellion against established authority and the introduction of new concepts.

On a personal level, he is associated with change and the breakdown of the status quo, introducing something unexpected, and perhaps outlandish, into our lives.

Unhappy with what exists, Uranus wants to alter and improve the situation in search of the ideal vision of him. A Uranus transit acts like an alarm clock that abruptly starts us out of our sleep, but it is up to us if we open our eyes to a new day, or if we cover our heads with sheets.

If we block or repress the changes that Uranus asks of us, then the Furies are born within us, and we bubble with resentment towards those by whom we feel restricted, and we may even get angry with ourselves.

On the other hand, if we act in accordance with Uranus impulses, the immediate results are likely to be unpleasant, as we are frightened by our new vision of ourselves.

However, even in the midst of crisis and difficulties, Uranian energy helps us understand why we are suffering and what the lesson we are destined to learn is.

Uranus connects us with our inner voice and allows us to penetrate a higher dimension of understanding – intuition.

Your intuition tells you that it is time to develop and expand in a different way than usual, but the idea of ​​changes makes you feel apprehensive and uncomfortable. You feel restless and dissatisfied with the current situation and you fear altering your position and leaving room for something unknown and uncertain.

Therefore, you are likely to struggle against these inclinations. But because you are using so much energy to restrain aspects of your personality that require some change, you may end up feeling exhausted and depressed.

You should know that this transit does not require the demolition of all the structures that you have been building in your life, but rather asks you to make some changes or alterations necessary to facilitate the growth of the new that this period indicates.

One of the things that is growing is the vision of your own worth and power, and this could manifest itself in conflicts with authority figures and in your attitude of standing up to people by whom you have previously allowed yourself to be influenced or dominated.

You want to get rid of what you feel drowned about, and free yourself from the restrictions and conditioning that tradition or your personal situation imposes on you.

If you know how to handle the energy of this transit with sagacity and prudence, you could take an important step towards the development of your creative potential.

The Moon has to do with feelings and the way we instinctively react to others, especially to our mother and women in general.

Uranus’ tense contact with the Moon indicates that you are likely to experience difficult emotional states that tear or upset you.

You are now very sensitive to stimuli of a sentimental nature, which can easily make you feel restless and uncomfortable.

You should analyze your feelings of frustration and discontent before making any major changes. Destroying existing emotional structures and personal relationships is not necessarily the best solution.

It may be your own internal blockage, which you have projected onto your environment, the cause of your frustration. You have to face your internal resistance and find out what qualities you must cultivate to improve your relationship with the opposite sex.

To success in original ways Trigon is the most harmonious aspect of the horoscope.

It smoothest the rough edges on the way to the goal, which in the case of contact with the Midheaven Meridian is associated with professional implementation and public recognition.

The second planet under his influence manifests its best qualities in the native’s life, of course, if he himself strives for development and spiritual growth.

Even when the trine is associated with Uranus, the king of unpredictability and eccentricity, he kindly favors the ward with original thinking, the ability to see unusual angles of the profession and through them to show the world the uniqueness of his talent.

However, the harmony of the aspect is overly relaxing. A person is confident in himself and thinks that there is no need to rush: the Nobel Prize will still get him over time. And then he wonders why his train disappeared into an unattainable distance, and he did not have time to catch it.

This aspect is often found in the cards of famous soothsayers, astrologers and inventors of all directions. Especially if one of the participants is in the signs of Aquarius or Gemini. Occultism with theatrical effects will bring worldwide fame.

The native really has a developed channel of communication with the subtle world, he reads the sign of the horoscope, palms, and ancient manuscripts at the level of intuition.

With a strongly pronounced element of the earth in the general natal chart, it is possible to become an eminent translator-linguist, archaeologist, historian, and journalist.

In any case, a regular profession will not work here. It is important for the carrier of the Uranus-MS trine to stand out from the crowd professionally, to shock the choice of a specialty associated with being in dangerous zones, communicating with celebrities or working in the prestigious secret service, which everyone has heard about, but does not know the details.

Arouse interest and enthusiastically talk about your work, that’s what excites and does not allow you to succumb to the pacifying harmony of trine. Glory comes to the owners of the aspect unexpectedly, but as a rule it happens after 25 years.

They either crave her with all their souls, or, on the contrary, demonstrate complete indifference.

Astrologers identify several directions in which the aspect impacts on fate: independence, free thinking, and lack of shyness with regards to public speaking and new acquaintances, which, however, borders on tactlessness.

interest in the secret and unknown, the need to be a pioneer and to patent your right and name for an invention, be it a technique or design; the talent of a physicist, mathematician, technician, engineer due to an internal understanding of how everything works, and not due to cramming and studying from books.

a career is successful not without the help of a circle of influential persons interested in the native’s inventions; disregard for material property, the ability to be content with little in everyday life, having a million in the account.

The search for new, unusual sensations to stimulate the imagination and sensuality, which are naturally poorly developed, unless Venus and the Moon are in a strong position; clairvoyance, telepathy, spontaneous foresight of upcoming events, especially at the time of a nervous shock.

Holders of the Uranus-MS trine often reject traditional teaching methods, preferring distance education, or appear at the institute to pass exams brilliantly, but do not attend lectures. In the profession, they are also looking for new ways and thanks to intuition, despite mistrust and ridicule, they make discoveries.

The degree of egocentrism of the genius carrier of the aspect depends on the position of the Moon and Venus.

If they are in the signs of Pisces, Taurus, Cancer, then there is a likelihood of a warm, sincere atmosphere in a relationship with a partner.

Otherwise, the native listens to himself and his desires. Men and women with the trigon Uranus – MC are burning with work and enjoy the result of their activity, inspired by the admiration of others.

At home they have an original creative atmosphere, an unusual design with a space theme or high-tech, a lot of metal or luminescent colors, which is little associated with the familiar comfort of a vacation home.

This is because for the wards of the trigon Uranus – Midheaven, generally accepted values ​​are hated. Even at home, they want companionship, creativity and a sense of belonging to their chosen race.

One of the native’s parents was also an original or even eccentric personality, who laid in the character of the heir a desire to be different from the general mass. For this, a person is able to leave home and family and go where he will become a star.

Practical interaction with the trigon Uranus – MC Thanks to the harmonious effect of trine, the native does not need to be afraid to change the spheres of activity, which is often prompted by the Uranian temperament, especially if the Ascendant and the 9th house are in the signs of air and fire.

The main thing is to tirelessly look for your business, doing which, a person feels the wings behind his back. Only this feeling will give the carrier of the trine Uranus – Midheaven a career takeoff.

Sometimes such people are able to deal with several areas at the same time, for example, design an electronic gadgets and draw up horoscopes, operate on patients and take vacations in the archaeological site.

It is important to develop empathy and the sensory sphere in order to read not only information, but also to understand the emotions of other people.

You do not need to enter into conflicts with parents when goals do not coincide, but to prove in practice the benefits of your purpose, be it creativity or the occult.

It is easy to ground the desire to throw out everything unnecessary from life by a conscious choice of really beloved things, friends, loved ones, and to cultivate a careful attitude towards them. Mascot stones for the trigon Uranus – MC – blue topaz, opals of all colors, sultanate and paired alexandrite’s.