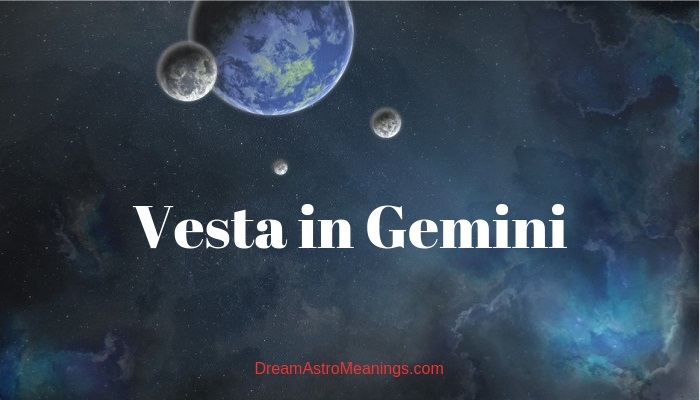 The fourth asteroid discovered after Ceres is Vesta, discovered in 1807. It is also the second heaviest asteroid.

This asteroid has on its surface two giant craters which are believed to be a result of mass collisions occurred billions of years ago.

The debris from these collisions was discovered on Earth in the form of meteorites.

The name Vesta is the name of a Roman goddess. Vesta was the goddess of home, family, and fertility. She was also the protector of the Roman people.

This goddess was rarely depicted in human form. She was mostly represented by her symbol, the sacred fire of Vesta, which burned in her temple in the Roman forum.

Her priestesses, the Vestal virgins had the role of the guardians of this fire, and if they allowed it to die out, they faced severe punishment.

Romans believed that the fire was protecting them from harm, and if the fire was extinguished that could suggest that the goddess Vesta withdrew her protection from the city of Rome.

Vesta was a very important Roman goddess. She had a holiday, Vestalia, dedicated to her. Women prayed to this goddess to help them conceive.

The Vestals performed various rituals in the temple, usually aiming to increase fertility and agricultural harvest. The Vestals were chosen from young girls at the age of six to ten and they needed to give their consent to remain virgins in the next 30 years.

It was not a small sacrifice, but it was considered a great honor to become a Vestal virgin.

This asteroid symbolizes the way we choose to face with our issues at work, how easily we make sacrifices, our integrity, our devotion to something or someone, as well as the issues we have because we abstain from intimacy and personal relationships or we fear them.

Vesta in a certain sign or house of the natal chart indicates the areas where our focus should be. It also indicates the people and situations we should consider getting rid of from our lives because they don’t serve us good.

Vesta also reveals how we deal with our physical needs, urges, and our passion and shows whether we choose to exhibit them openly or we suppress them. This asteroid also reveals the areas of our life where we choose to devote our focus and energy.

It indicates the sacrifices we make for a higher good or our sacrifices for some cause or a person.

Vesta shows our devotion to something or someone, like a project, a cause, a person, belief, etc. It also reveals the areas of our life where we have some issues we tend to ignore or the ones we hide from others.

These areas are usually very important for us, but we seem to fail at them for some reason.

This asteroid gives us the persistence and endurance to focus on our goals and achieve them, as well as to overcome all the potential issues we encounter along the way.

Men with Vesta in Gemini are very communicative and interesting.

They have a wide circle of friends and acquaintances and love talking to them and sharing their experiences and knowledge.

These men enjoy learning new things, but they also enjoy selflessly sharing their knowledge with other people.

Many of these men have a tendency to overthink in situations where they need to relax, especially in romantic relationships.

Their tendency to be too rational could create barriers between them and other people.

Women with Vesta in Gemini are talkative and fun to be around.

These women have a wide range of interests and constantly expand their knowledge in different subjects.

They can be prone to appear way too intellectual when they express themselves which might confuse other people, and make them appear incomprehensible, which is not their intention at all.

They have a tendency to overthink situations, especially in their romantic relationships which could cause them problems with their partners, but other people as well.

In some cases these women could be prone to avoiding intimate contacts and personal relationships.

The good traits of Vesta in Gemini: the tendency to over-intellectualize, emotionally distant, avoiding intimate relationships, difficult to understand because of their overly intellectual way of expressing themselves, etc.

People with Vesta in Gemini are very communicative and their work efforts are usually focused on words and the transfer of information.

They are most skilled at transfer of information. They might become overly intellectual and complicated in their expression, so much that their thoughts become difficult to understand, and they begin confusing people with the things they say.

Their mind is an asset in their career, but it often represents a barrier in their romantic life.

In some cases, they might be prone to avoiding emotional contacts and/or intimacy.

These people usually have a large network of friends and acquaintances. They are good at doing several things at once. These people seek to gain knowledge and they enjoy sharing it.

They are often in a quest for answers to the questions that interest them.

These people should become more relaxed about emotional attachments and stop intellectualizing and overthinking all their experiences (especially the emotional ones).

They should instead relax and enjoy in the feelings these experiences bring into their lives.

People with Vesta in Gemini are intellectual types and can be prone to over-intellectualize every situation, especially the ones where there are emotions involved.

They are communicative and in some cases exaggerate in expressing themselves in an over-intellectual manner which makes for people difficult to understand them.

They need to learn to relax and enjoy the emotional experiences they are having instead of overthinking and rationalizing situations, which creates barriers between them and other people.