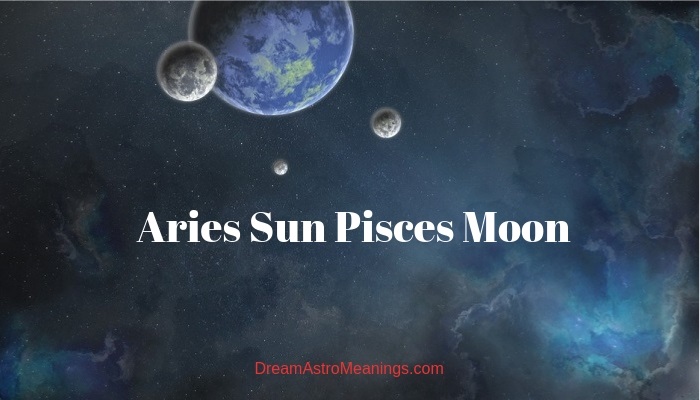 The Sun in our natal charts symbolizes the rational side of our personality, while the Moon symbolizes the subconscious and the hidden one, the one which is not likely to be seen and experienced by every person we meet.

People with Sun in Aries appear open and easy-going, but there’s always some part of them which is incomprehensible. On the outside, these people might even seem inconsiderate and unemotional, but the Moon in Pisces tells a different story.

These people are very sensitive and emotional, but they hide their emotions with a rough exterior. Only the people who gain their trust will be allowed to get to know the emotional side of their personality.

They are a good combination of action, ambition, confidence, persistence, and focus on success, combined with a compassionate and emotional nature which doesn’t allow these people to ruthlessly follow their dreams, but also be considerate of other people while doing so.

People with Sun in Aries are leader types and they don’t want to be told what to do. People with Moon in Pisces have a peaceful nature and are prone to making a compromise. This combination enables these people not to be so rigid and demanding others to follow them at any cost.

They will be more prone to making agreements with others than imposing their will and opinions to them.

People with this Sun/Moon combination are adventurer types and love company and action but are also loners at times. They love meeting new people but have a small circle of devoted friends which they tent to keep for life.

Although they can be very talkative and amusing, they leave the deepest thoughts and topics for the people they value the most and have a strong connection with them.

They usually love being in the center of attention and loudly announce their presence, but some of them can be unusually shy and avoiding being noticed. Most of them like to keep their private matters and feelings to themselves, and even the ones who are closest to them won’t get the chance to find out their deepest feelings and inner thoughts.

They should be careful not to allow their sensitivity to influence their will and cause them to retreat before problems instead of confronting them. If they are not careful, their Moon could lead them to addictions and different means of ignoring and avoiding their issues.

They need to work on maintaining their confidence in their abilities and making a habit of dealing with their issues when they arise instead of putting them under the carpet.

These people are usually passionate and love physical intimacy, but they cannot be satisfied with the physical act if there are no emotions involved.

They desire a partner who is emotional and can adequately return their feelings. They can appear rugged on the outside but are sweet and kind people who are always ready to help.

They are determined and confident, but some of these people might experience a sudden lack of confidence, feelings of fear, inadequacy, or depression. They can experience sudden changes in their mood and behavior, from outbursts of aggression to episodes of apathy and disinterestedness.

These people are a mix of fire and water energy and that is what creates these extreme swings in their mood and behavior.

People with Sun in Aries and Moon in Pisces are usually creative and artistic and ambitious enough to make the most of their creativity and artistic skills. They often choose a profession in some creative or artistic area and their Sun keeps them persistent and determined enough to become successful in their creative endeavors.

Their Moon can often be the cause of disillusioning themselves with grand ideas which are quite unrealistic, which in combination with Sun in Aries determination could cause these people to take dangerous risks which will lead them to disaster.

These people can also be prone to idealizing people and making bad judgments about them, which inevitably leads them to disappointments and anger when they realize they were wrong.

Both the Sun and the Moon in these placements make these people helpful and generous. Most of these people are selfless and enjoy helping others without expecting anything in return.

The bad traits of Aries Sun Pisces Moon: aggressive, moody, depressed, prone to mood changes, prone to risks, prone to disillusioning themselves, fearful, shy, loud, imposing their will onto others, secretive, loners, prone to addictions, ignoring their problems, etc.

People with Aries Sun and Pisces Moon have a warm and emotional nature. They are passionate and romantic at the same time. They are confident about making an approach to the people they like, but at the same time have a timid trait in their character.

These people love being in a relationship and/or marriage, unlike some typical Sun in Aries people who love the excitement of new experiences and changing partners.

It is not that these people are immune to these situations, many of them are not, but they are more likely to settle down with one person in a long-term commitment or marriage.

They love the intimate side of a relationship, but they usually need to combine passion with deep emotions. Many of these people have difficulty sleeping with a person if they are not in love with them or at least have strong emotions towards them.

Their natural ruggedness is softened by Pisces influence, and these people can be very gentle and affectionate towards their partners.

These people are usually romantic and enjoy making their partners happy. Their adventurous spirit and their creativity often inspire them to organize some surprising activities and fun activities where both them and their partners will enjoy spending time together.

They love to travel and desire a partner who shares their love for adventure and new experiences. They enjoy going places with their partner and experiencing new cultures.

They are protective of their partners but usually desire to be the leader in the relationship. They like to be the one making all the decisions, but they do respect their partners’ opinions.

They are usually very organized in their relationships and make all the plans, but in some cases, they tend to lose focus and begin forgetting things that are important, and their partners need to step in.

They are decisive and organized parents, but also have a very tender approach to their children. These people love spending time with their children and try to make sure their children have a variety of different activities.

They both try to nurture their sporting abilities, but also develop their creativity and artistic skills.

These people can be prone to cheating because of their strong physical needs, but they usually manage to sustain their urges because in their minds, the importance of the relationship or marriage cannot be measured with short-term pleasure.

They can exhibit possessiveness towards their partners and in some cases tend to spend as much time with them, even to the point of being inseparable and doing everything together.

Such behavior isn’t acceptable always and they have problems with partners who desire to maintain a part of their freedom and independence in the relationship and/or marriage.

People with Aries Sun and Pisces Moon are a combination of fire and water element. They are both fiery and passionate, and emotional and extremely sensitive.

Their ideal partner is a combination of these two elements because they will be able to understand the somewhat contradictory nature of the person with Sun in Aries and Moon in Pisces.

Partners with dominant fire or water element could only be able to understand one side of their personality, and would require a lot of compromise on both sides.

In general, these people have an understanding nature and can make a relationship with any sign work, providing there is a mutual understanding between the partners and desire for compromise and to make the relationship and/or marriage work.

People with Sun in Aries and Moon in Pisces are a combination of fire and water element. They are confident, ambitious, emotional and sensitive. They have great artistic skills and are very creative, and their will, enables them to use their creativity and materialize their skills.

These people are leaders and they need to have that role in all their relationships but are at the same time prone to making compromises. They can be prone to multiple dating, but are usually committed to their chosen partner.

They usually take the lead role in their marriage as well, and tend to organize and make plans for both spouses. They try to take into consideration their partner’s opinion as well.

These people are good parents and try to find as much time as they can, to spend it with their kids.

They have a passionate nature and strong needs for physical intimacy, but they also need an emotional connection with the person they are intimate with. They get along best with partners who also make a combination of a fire and water signs because they could understand them best.

Their blend of traits also enables them to get along well with partners of any element especially because they have an understanding that compromises are necessary in any relationship.