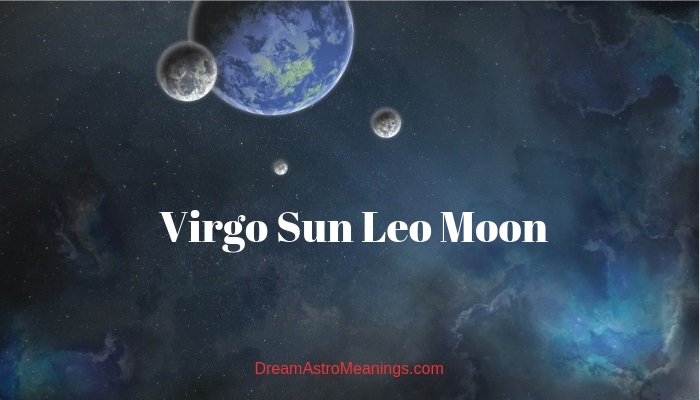 While the latter is known only to us and the few people we decide to share it with, we openly share the first with the people from our surroundings.

People with sun in Virgo and moon in Leo have a character which is a combination of earth and fire element.

These people can be a bit self-absorbed and selfish. They often look at their interest first without paying much attention to other people’s needs.

They value themselves very much and often consider themselves better than others.

That of course, doesn’t have to be a bad thing. They choose carefully who they spend their time with and can be a bit snobbish.

They could be a combination of a cheapskate and spendthrift, depending on which side of their personality prevails at which moment.

In general, these people love quality items and don’t mind spending money on them, but only if they need them at that moment.

They usually manage to control their urges to spend money on items they like but don’t need.

One of their main issues in relationships with other people is their tendency and habit of correcting and criticizing people’s actions and behavior.

These people often believe that they have the right to tell people what to do at the same time getting offended if someone tries to criticize them.

They have a problem with accepting their mistakes and apologizing. They usually have a strong ego which prevents them from admitting they are ever wrong.

Their behavior could cause a lot of damage to their relationships with other people. People usually don’t allow to be criticized or judged for their actions and behavior.

These people need to become more tolerant and accept differences.

They often criticize people if they don’t do things they would do them. It is important for them to let people do things their way, especially the ones that are close to them.

By easing the pressure these people put on others, they will improve all their relationships.

Many people fear being around them because they fear their reactions to their behavior. They could make people carefully choose the words they will say to them so that they won’t provoke their reactions.

The main thing is that these people are unaware of their behavior and influence they have on others. They do it out of good intentions but are unaware that their actions are irritating others and damaging their relationships.

The fact is that they are usually right, but regardless of that, they should be aware that they don’t have the right to mess in other people’s business and determine the way they should behave, unless they are specifically asked by these people to do exactly that.

These people are excellent organizers and never lose any detail out of sight. Their minds think fast and they find the solution to the most complicated problems.

Once they learn not to mind other people’s business they will begin feeling more relaxed and their relationships with people will significantly improve.

They are not very ambitious, but desire to be well-paid for the work they are doing. These people don’t like being told what to do, and that is why they sometimes have issues with authorities.

Many of them end up as the owner of their own business, and that is when they feel the most satisfied.

They are excellent for any job which requires precision, attention to details, organizing skills, punctuality, and practical approach.

They are very practical and usually don’t waste their time on matters of no importance. They value their time and don’t allow people and situations wasting it.

They don’t have a problem with speaking their mind and are very open.

If they don’t like something or someone, they tend to show them or speak openly about that.

These people love to feel financially secure and that is why they put in the effort to provide it.

They like to have some money stashed in the bank, and if they have more than is necessary for their feeling of security, they often invest it in real-estate.

These people usually don’t have ambitions to become leaders, and they prefer individual work.

People often ask them for advice because of their ability to see the whole picture at the same time not losing their sight from the details of a certain situation.

The good traits of Sun in Virgo and Moon in Leo:

The bad traits of Sun in Virgo and Moon in Leo:

– irritating, demanding, not prone to compromises, intolerant, critical, judgmental, strict, ignoring other people’s needs, selfish, self-absorbed, don’t accept being criticized, have a problem with apologizing, don’t accept the possibility of being wrong, etc.

People with Virgo Sun and Leo Moon are not easy to establish and maintain a relationship with.

They could have a demanding character which is not prone to making compromises and often needs to be tolerated by their partners or spouses.

They are usually unaware of the difficulty of their character and their nature, and usually observe the traits that are good in their character, omitting to take into consideration the ones that many people consider obnoxious.

These people have a stable and confident personality. They often have a strong ego, even though they don’t admit that.

They have excellent organizing skills, and their need to organize transfers to other people as well, especially their partners or spouses.

They often have the need to tell their partners or spouses how to do certain things, what to do or not to do, and criticize them if they don’t follow their directives.

Partially, the reason for that behavior is the fact that these people lead a very organized life and usually do things in a certain way.

They are not very tolerant towards someone in their surroundings doing these things in another way, and that is what triggers their reactions.

This behavior of theirs is not very obvious with people who don’t spend time much time with them, although they too could find themselves in the backfire of their reactions if they happen to do something wrong while visiting their house for example.

The greater problem is their partners or spouses who they need to share their lives and usually spend time with them daily.

In these situations it is not easy for them to control their urges to criticize their partners if they do things differently and that in most cases leads to conflicts.

These people need time to relax and get to know their partner before entering a committed relationship.

They are usually commitment types although until they find the right person they lead very satisfying lives. They are perfectly comfortable being on their own and without a partner.

In a relationship or marriage, they tend to undertake the role of the organizer and the person who remembers all the duties because it naturally suits them.

They could be prone to criticizing their partners for being the only one to remember everything that needs to be done in their life together, but secretly they enjoy every second of that role, and wouldn’t be able to accept sharing it with their partners.

They are good with organizing the house budget and make sure there’s always enough money for the things they need.

They tend to save money to invest them in some quality goods for the house.

They have an entrepreneurial spirit and if their partner is a good match, they could do some business together.

As parents, they can be either too strict or demanding, or overly complaisant towards their kids. These people love children and enjoy spending time with them.

The best match for a Virgo sun and Leo moon is also a combination of earth and fire.

In general, these people could get along with any sign, providing that there are enough compatible connections between their charts.

Their partner should be someone who has a tolerant nature to be able to deal with their a bit difficult character.

People with sun in Virgo and moon in Leo are often self-centered and a bit selfish.

Although they would never admit that, these people can think of themselves first without paying much attention to the needs of others.

They could be very direct and straightforward up to the point of insulting others with their remarks.

On the other hand, people should pay a lot of attention of what they tell them because they get easily offended, which causes a lot of repercussions, such as quarrels, distancing themselves, silence treatments, etc.

They could be very egotistical and vain. They often consider themselves perfect and unmistakable and have a problem with admitting that they are wrong and apologizing.

People often find their nature irritating because they are prone to giving advice and criticizing others without being asked for their opinion.

They need to learn to control their reactions and stop commenting on other people’s behavior, especially the ones that are close to them.

They are perfectionists, with an eye for detailed, well-organized, detailed, precise, and punctual. These traits make them excellent workers, and great problem-solvers.

These people are very intelligent and make quick conclusions.