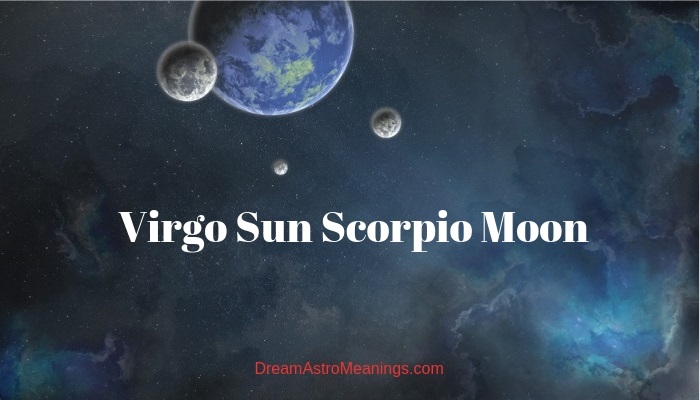 The sun sign in our natal chart shows our rational and conscious side of personality. The moon sign shows our subconscious and irrational side.

People with sun in Virgo and moon in Scorpio are a combination of earth and water element.

These people are usually very down to earth and always aware of the circumstances around them. These people cannot be surprised or lied to easily because they have an ability to sense the truth and when someone tries to hide it from them.

They are very persistent and determined to accomplish their goals. They could sometimes be self-absorbed and selfish and put themselves first, especially when it comes to accomplishing their goals and desires.

These people are not easily discouraged and are able to find a way where others wouldn’t be able to. They are very intelligent and have a strong intuition which helps them make the right decisions when it’s necessary.

They could have rigid attitudes and beliefs and are not easily influenced. These people usually don’t like changes and prefer to maintain the status quo.

They don’t like unpredictability and love to stick to the things and situations they know already.

They have a practical approach to solving problems and dealing with everyday issues.

These people are very enduring and don’t allow circumstances to discourage them easily. They have a courageous character and deal bravely with their challenges.

They don’t push things under the carpet and deal with their issues when they arise.

These people are straightforward and direct, and they don’t tolerate liars and people prone to deceit. They don’t hesitate to tell people their opinion regardless of the potential consequences, although they make sure not to do it in a hurtful way if possible.

They are usually ambitious and often have some highly set goals for themselves. These people have all it takes to make it to the top, which is usually where they end up.

The Scorpio moon gives these people a dose of suspicion and mistrust in people, which only adds to the natural Virgo aloofness.

These people have detective-like skills and are able to make some incredible conclusions using just a fraction of details. They intuitively know what is going on.

They have an ability to read people’s energy and instinctively know whether it is negative. They are able to sense what people are thinking about them and if they have any bad intentions.

These people are often interested in paranormal sciences and mysteries. They usually enjoy reading and their favorite literature are mysteries and spiritual and paranormal literature.

They often have some supernatural abilities and are often gifted with healing powers. These people have a natural inclination towards helping people because they feel their energy and pain.

That is what makes them susceptible to receiving their negativity and becoming overwhelmed by it. They need to learn to protect themselves and not allow it to overtake them.

They are often highly spiritual and have a natural inner knowing of things beyond the visible realms. They are very proud and honest.

These people don’t tolerate lies and are prepared to end a relationship with a person who has lied to them regardless of the importance and longevity of that relationship.

If they cannot trust a person, they don’t want them in their lives.

They usually have a dignified and confident personality which people naturally admire and look up to. In some cases, they could be prone to manipulating people to achieve their goals.

They could be unscrupulous and do whatever it takes to get what they want.

Their abilities make these people dangerous opponents and the ones who have bad intentions towards these people should really be watching themselves and reconsider their intentions.

The good traits of Sun in Virgo and Moon in Scorpio:

The good traits of Sun in Virgo and Moon in Scorpio:

People with sun in Virgo and moon in Scorpio are usually down to earth, stable, practical, and calculated.

They usually know what they want from life and their relationships.

These people don’t waste time on futile matters, although with the moon in Scorpio could be prone to sudden magnetic infatuations with people who are not their match, followed by long periods of suffer and obsession.

They could easily have an obsessive nature and become infatuated with a person completely.

Fortunately, the sign of Virgo acts as a stabilizing factor and controls these people’s urges.

Virgo usually awakens them on time and calls them to their senses. These people are passionate, but that passion is usually hidden behind a cold and detached façade.

The people they choose to be with know the details, and others who don’t know them intimately could not even guess.

These people don’t have a problem approaching the person they like and be open about their desires and intentions. Both men and women are like that.

Scorpio and Virgo are picky signs and they don’t just randomly approach to anyone they find attractive. It takes much more than a mere physical infatuation for these people to become interested in someone.

Besides being magnetically attractive to them, their ideal partner should also be very smart and intriguing in a specific way. They love people who are intelligent and have a lot to say on a variety of subjects.

They are usually commitment types. They often take the time to explore and experience different relationships before they meet the right person who makes them ready to give up on dating and settling down in an exclusive relationship or marriage.

That is not easy with these people because they have very high criteria and expectations from their potential partners or spouses; but it is possible.

They take commitments and marriage seriously. They are very responsible and reliable.

These people become devoted and faithful once they commit, and expect the same behavior from their partners and spouses.

Betrayal and infidelity is another thing these people are not able to tolerate; if that happens, these people will most likely end the partnership or marriage.

They need to trust their partners and spouses and that is one of the most significant prerequisites for them in a commitment.

These people are very organized and don’t mind taking the leading role in their relationships. They make sure everything is done on time, and remind their partners and spouses of their duties as well.

They love spending time at home with their spouses and partners, and are not much of outdoor types. They prefer reading something interesting or doing something with their partner.

These people usually pay a lot of attention to their personal hygiene and are very tidy, and expect the same from their spouses and partners.

They could behave a bit demanding towards their partners when it comes to doing some house choirs, asking them to do them in a certain manner.

They could be prone to judging and criticizing their partners and not being tolerant enough towards their differences.

It is important for them to learn to control their urges to tell others (especially their partners) what to do and how to behave. That might create conflicts and tension between them.

These people are good in the parenting role. They are strict and demand their children to follow certain rules, but usually allow them their space and personal freedom to develop their personalities.

The best match for a person is an earth or water sign, preferably with a Scorpio influence.

Air or fire signs could potentially be a good match for them, providing they have prominent Scorpio influence in their charts, or water and earth element planets prominently placed.

People with sun in Virgo and moon in Scorpio are very confident and often magnetically attractive.

These people usually know their goals and know how to achieve them. These people are usually honest and trustworthy, although they could be prone to people’s manipulation to accomplish their goals.

These people are very intelligent and have a strong intuition. They are usually able to read people’s minds, and it is almost impossible to lie to them or deceive them.

Being direct and honest themselves, these people cannot tolerate lies and deceptions, which represent a cause to end the relationship with the person who has treated them in such a manner.

It is an insult and shows lack of respect and they cannot accept being disrespected and underestimated in such a manner.

They are usually commitment types and are loyal and faithful once they begin an exclusive relationship with someone or get married.

Infidelity is another thing these people cannot tolerate and what almost certainly leads to a breakup of their relationship or divorce.

With these people it all comes to the lack of respect and underestimation of their abilities.

These people usually have some unbelievable powers which make them different from others. They often have psychic powers or healing abilities.

Because they are emphats, and able to sense other people’s energy, they are prone to receiving their negativity as well, which requires them to be careful and protect themselves from other people’s negative influence.

They are good at organizing things and practical. These people are also reliable and usually take care of the relationship duties.

They are also good in the role of parents. They are passionate but also seek partners who are intelligent and have something to say.