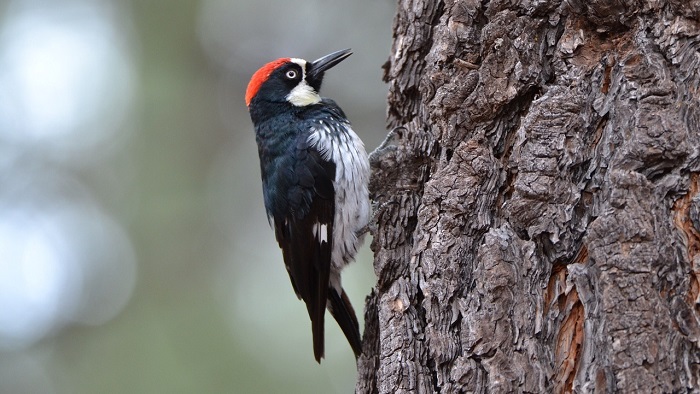 Woodpecker is featured in numerous traditions and cultural concepts and not without specific reason.

As you all know, woodpeckers have an inborn habit that seems a bit strange and very interesting to people; it is, of course, woodpeckers’ tree knocking.

Characteristic sound and rhythm of his pattering on tree bark is seen mysterious and fascinating.

People associate its rhythm with the pounding of life energy, with life itself. Woodpecker is symbol of the rhythm of overall life on our planet.

In old European traditions, woodpeckers were seen fortunetellers; they have believed a woodpecker announces changes by his tapping. Babylonians associated these strange birds with concepts of abundance and fertility.

In numerous folk traditions, woodpeckers have been associated with the element of fire and they have chthonic symbolism.

Woodpeckers are commonly seen as magical creatures, those who are capable of communicating realms hidden for human eyes and even human minds.

Woodpeckers are present in two of the most well researched mythologies on the world, Ancient Greek and Ancient Roman mythology. Both feature stories and legends about deities turned into woodpeckers.

One interesting, tragic and romantic Roman myth tells about beautiful sorceress Circe, the goddess of magic, sometimes referred to as a nymph, and Picus, legendary king of Latium. Circe was in love with Picus, but the proud king was not interested in her.

Circe was, of course angry with Picus dared to reject her, so she turned him into a woodpecker.

This myth partially explains why woodpeckers have been associated with magic and prophetic characteristics; Picus himself was known for his divination skills and oracular gifts. 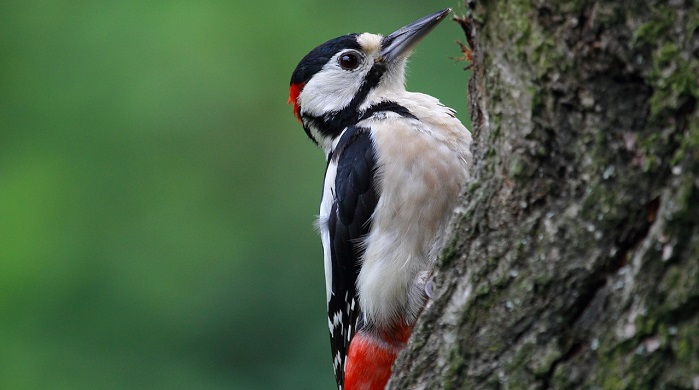 Since then, woodpeckers have been known as symbols of sorcery, magic and prophetic powers. There are many other interesting woodpecker related myths.

Celeus, a figure from Greek mythology, the priest of Demeter, has once tried to steal some honey from a cave on the sacred Mount Ida, with his friends. It was the same cavern in which Rhea has given birth to the ruler of Greek pantheon, the almighty Zeus. Zeus wanted to kill Celeus for entering the sacred ground and the attempt of stealing sacred honey.

However, no one should die in this holy place, so Moirai, goddesses of fate, along with Themis, have stopped him.

To punish Celeus for this sacrilegious act, Zeus has turned them into birds; Celeus was turned into a green woodpecker. From that day on, a sight of a woodpecker was considered a good omen for Greeks; woodpeckers were in direct connection with divine powers, in a way.

There are even depictions of a woodpecker sitting on the throne of Zeus. Ancient Greek historian Plutarch mentions a woodpecker as a symbol of Ares, the mighty god of war.

He describes the bird as so strong that it could even bring down whole trees by knocking with its sturdy beak.

Other cultural and religious concepts also tell stories about human beings turned into woodpeckers. According to one of beliefs, woodpeckers are actually carpenters and beekeepers who worked on Sundays, days decided by God to be days of rest and tranquility, nor working days.

Those who carve wood or cut a tree with a bee hive on Sundays would be turned into woodpeckers.

It was a fair punishment that would made them have no rest in cutting wood, even on holidays. Another legend explains why black woodpeckers can drink only rainwater.

The story tells about a black woodpecker that refused to dig river basins or that has tried to bestrew sea basins, on which other birds have worked with dedication and lot of effort.

God has punished the woodpecker for being so uncooperative and bad, so the bird cannot drink water from rivers and lakes. From that day on, woodpeckers satisfy their thirst by drinking only rainwater. People, thus, see woodpeckers as heralds of rain.

People also associate woodpeckers with fire. The upper part of woodpeckers heads are covered by red feathers, which is symbolically identified with fire.

In Poland, black woodpeckers are believed to be those that have revealed the secret of fire to humankind and this helped people to warm up and make food. It is a good association.

On the other hand, Russians believe that is a woodpecker lands on a rooftop, there will be fire. In different Slavic traditions, woodpeckers are associated with magic and mystery.

According to one of beliefs, woodpeckers have found a magical grass, which had magical powers to open all the locks. Woodpeckers are also associated with secret treasures, the underworld and so on.

In eastern Slavic traditions, woodpeckers are associated with bad luck and death. It is believed that woodpeckers’ tree drumming announces death. Wood that was being foraged by woodpeckers is believed to be unsuitable for use as a material to build something.

On the other hand, it was considered especially good to use as fuel for heating. Hearing a woodpecker near your house is not a good sign for some Slavic peoples and having a black woodpecker flying over your path was associated with illness and death.

From all of these legends and beliefs, we could conclude that woodpeckers are, at least, symbolically intriguing birds.

However, they symbolize other things, besides these mentioned in myths and folktales we have presented. Woodpeckers are associated with intelligence, progress, creativity, spirituality, life energy and knowledge. They are also symbols of disturbance and noise.

Woodpeckers symbolize search for knowledge, wisdom and learning. Their drumming and foraging tree barks are symbolically identified with searching for new ideas, learning new things about yourself and about life in general. Woodpeckers are considered quite an intelligent bird species in nature, so they symbolize wisdom, resourcefulness and cleverness.

These interesting tree drummers are symbolically associated with the energy of life, the spiritual energy and the rhythm of life. They also symbolize creation, creativity, progress and prosperity.

People associate woodpeckers and their drumming with steadiness, keeping pace and moving forward.

Their drumming symbolically represents the beating heart of the earth and of all living creatures. A common woodpeckers’ black, white and red feathers are symbolically associated with determination, positivity and creative energy.

Black and white feathers represent the simplicity of life, focus and determination, while red ones represent spiritual strength, inspiration and the power of creation. The whole appearance of black woodpeckers represents balance and harmony, along with its rhythmic drumming.

Besides these positive concepts, woodpeckers symbolize noise, turbulence and disturbance.

Their drumming could be seen as both a positive and a negative symbol. We have explained the positive side, while the negative is associated with noise, annoyance, irritation and disturbance.

For example, dreams about woodpeckers are commonly seen as disturbing and unpleasant, ones that keep a dreamer restless and do not let him or her sleep well and recover from their worries.

Woodpecker people are usually talented in arts and they have a kind of light approach to life.

They know their priorities and find it easy to keep in their track. They know there are always things that should be done and those they dream of accomplishing or doing.

Woodpecker people are responsible and they do not find it hard to follow guidelines and routine. They set an autopilot for inevitable, essential daily things and have all the time remained for their own joy. However, they do not waste their time on lame things.

They love to travel, to learn things about other people and cultures, to read, to create and they are particularly interested in art. Woodpecker people are kind and polite, although they could sometimes be to pushing and even a bit annoying. They are talkative and charismatic, so people love to have them around.

Woodpecker people should only mind their attitude in terms of being pressing; sometimes they get too driven by their own imagination, experience and stories, so they only expect others to listen, without giving them any space to express their own thoughts.

However, it is something most Woodpecker people learn to control.

While Woodpecker people do not take things in life too seriously, they would never left the business unfinished or break a promise.

They just see not to worry too much in advance. They are very loyal friends and supportive of their community.

Woodpecker people bring laughter and joy to others and they really enjoy having such an effect on others.

Thing they love the most is to see their dear ones laughing and being content and happy.