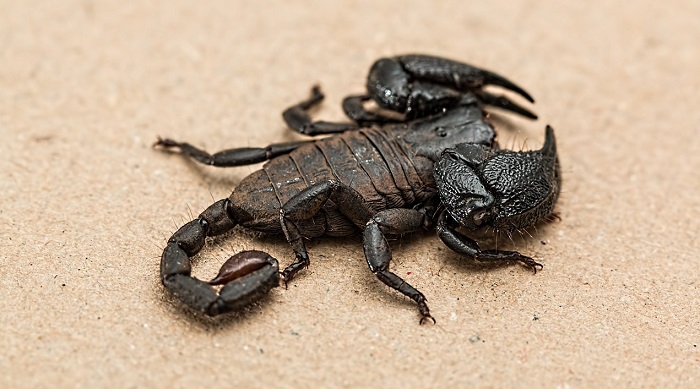 Scorpions are arachnids with a long evolving history, going back more than 400 million years ago. They are very adaptable beings and can live in different environments. There are more than 1.700 species of scorpions, which can be found on all continents, except Antarctica.

In many countries, they have been accidentally introduced through imported fruit or in some other similar ways. They live in mountains, caves, on trees, on the ground, in the sand, in rocks, and in other habitats.

They are known for their venomous sting. Not all species are dangerous to humans. They have thick bodies which protect them from predators. They have a good light-sensitive vision and can see well in low light conditions.

The scorpion tail ends with a venomous sting which they use to inject their venom into the victim’s body.

They prefer temperatures between 20 and 37°C, but can also survive on lower temperatures, as well as deserts. They are usually nocturnal creatures, and shelter somewhere during the day, resting for the night when they go out and search for food.

They are also available to store food and survive long periods without any food taken. These periods can last from 6 to 12 months.

Most scorpion species reproduce with the participation of males and females. Their courting rituals are very interesting, and they resemble a dance. After the mating is over, the males retreat to avoid being eaten by the females, which sometimes occurs.

Some species reproduce through a process called parthenogenesis, where the unfertilized eggs develop into living embryos without the males’ participation.

After hatching, the mothers are carried on their mother’s back until they become able to take care of themselves. An average scorpion litter is around eight young. During the period of growth they go through many moults (usually five to seven). During molting, their exoskeleton is removed with a new soft one. Until the new one thickens, the scorpion is very vulnerable.

Scorpions rarely use their venom for killing their victims. They prefer using their force to overpower their prey and enemies and the venom is a secondary weapon. Not all scorpions have venom which could kill humans.

What does the Scorpion Symbolize? 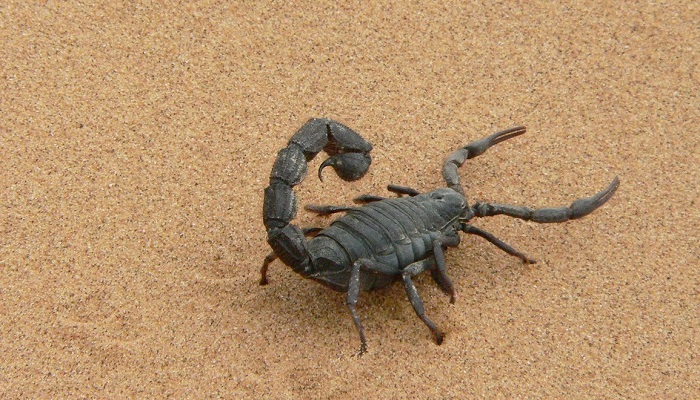 Scorpions have different symbolism attached to them.

They are important symbols in many cultures around the world. They are considered as symbols which shield us from evil, but they could also symbolize something evil.

The Meanings of a Scorpion as a Totem Animal

The scorpion totem has many different meanings. Here are some of them:

Power. Scorpions are a powerful animal and a powerful totem. This totem is giving you the power to conquer the world and achieve anything you desire. You are a powerful individual if you have the scorpion as your totem. Others respect your strong personality.

Courage and protection. With the scorpion as your totem, you are a brave person. You are not afraid to confront the danger you come across. Just like your totem you don’t lack the courage to go after you want and to use your strength to defend yourself and what is yours if needed.

Sexuality. People who have the scorpion as their totem are very sexual beings. They have strong sexual needs and they need to satisfy them often. With the scorpion as your spirit animal you are an excellent and unforgettable lover.

Toxicity. Scorpions are venomous creatures. They use their venom to paralyze or kill their victims. Just like your totem animal, you can sometimes be toxic. You tend to make sarcastic remarks and be overly honest in situations when someone can get hurt. This totem animal teaches you of the need to control this habit, and be more thoughtful of other people’s feelings.

You might have problems in your relationships with others if you continue behaving in such a manner.

The Scorpion as Your Totem Animal

If the scorpion is your totem animal, you are probably a powerful individual who influences others.

You are protective of your privacy. You tend to have secrets no one knows. You are a protective parent as well. You can sometimes be vulnerable and you are not ashamed to show your vulnerability.

You can be sharp with your words and can easily hurt other people’s feelings with your honesty. You can’t stand weak people.

People with scorpions as their totem animals are usually very enigmatic and charismatic. People are very attracted to them.

What if a Scorpion Appears in Your Life?

When the scorpion appears in your life, it usually calls you to cleanse yourself and your life from unwanted and potentially harming content.

The scorpion is asking you to cut of ties with people who don’t serve a purpose in your life anymore or they are somehow causing you harm.

It could also be a warning to get rid of something which is blocking your progress and movement forward towards your goals.

You need to confront all these things and people and be brave enough to remove them from your life. You should de-clutter your home and clear your space from stagnant and negative energy.

The scorpion is asking you to focus on the process of your personal transformation which will enable you to accomplish all your desires.

The scorpion could be asking you to decide the goals you should focus upon and begin moving towards achieving them.

This totem is encouraging you to believe in your powers and abilities to achieve whatever you can imagine. Use your intuition to guide your steps.

When to call on a Scorpion?

You should call on scorpion when:

Dreams about Scorpion – Interpretation and Meaning

The scorpion appearing in your dream usually symbolizes changes and transformation you are about to experience.

This dream is asking you to get rid of the clutter from the past, whether in the form of things or emotional content.

You need to have the courage to confront all the issues which are blocking you and deal with them.

This dream could also indicate people and situations which are hurting you.

Maybe you are holding on to some resentment and negative feelings from the past and this dream is reminding you to get rid of them. Don’t allow them to block you.

Sometimes a dream about a scorpion could indicate something in your life that you need to accept and move on with your life.