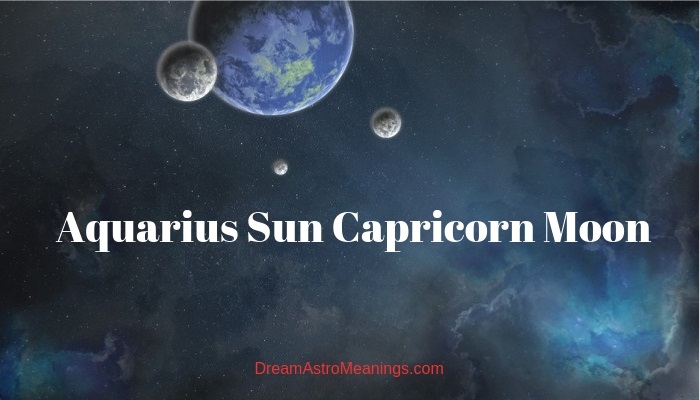 Our sun sign traits demonstrate our outer self, which is a side of our personality we don’t have a problem openly showing to the people from our surroundings.

On the other side, the moon sign traits in our natal chart reveal our inner self, which is the hidden side of our personality and the side we usually tend to keep private or we only share parts of it with the people we trust and care about.

People who have sun in Aquarius and moon in Capricorn have a character which is a combination of air and earth element.

Both Aquarius and Capricorn have the same ruler, the planet Saturn. Aquarius has another ruling planet, the planet Uranus. This combination of sun and moon signs, gives this people a balanced personality.

These people are very intelligent they have a capacity for making innovations and discovering new things. They are usually very rational and down-to-earth, unlike most other people born in a sign of Aquarius.

The combination of their sun and moon signs doesn’t give these people a prominent emotional side in their personality. These people are not very emotional and their actions and reactions are governed by their ratio and their minds.

Although Aquarius people are prone to make irrational and reckless decisions and actions, the moon in Capricorn gives these people the tendency to be thoughtful and take their time before making decisions or taking actions.

These people are careful about whom they interact with and they usually don’t have a large circle of friends and acquaintances.

Although they don’t usually have problem approaching people and meeting new people, these people are not very sociable and they prefer spending their time alone or in the company of their trusted friends and family members.

These people are very intelligent and in some cases even geniuses. They often choose professions where they can use these genius abilities, usually in areas related to the latest technology or some other areas of innovations and discoveries.

Their mind is working fast and they process the collected data quickly. They have an ability to notice a lot of details and they often use them in the process of resolving their issues and problems.

They can be prone to believing they always know everything best as well as be prone to imposing their opinions to other people, which these people often consider irritating.

These people often have a problem admitting they’re wrong and admitting their mistakes, and they usually have a strongly developed ego.

These people are very ambitious and determined to succeed. They usually don’t give up before challenges or obstacles and they even get motivated when some difficulties arise on their path to achieving their goals.

They usually manage to reach high on the social status scale and manage to provide themselves a substantial income.

These people love financial security and they try to do all they can to provide it for themselves. They are usually not easily influenced by others and have a problem with accepting and respecting other people’s opinions.

These people are very enduring and have a great physical stamina. They often choose some extreme sports to fulfill their desire for adventure and these sports are usually the ones that require great physical strength and endurance.

These people never give up on their goals and they’re ready to go through great difficulties to achieve what they want.

They can be eccentric and unpredictable and people often don’t know where they stand with them.

Although their nature might appear rigid and restrictive, these people often have kind hearts and are willing to help others, usually without asking anything in return.

Some of these people can be very calculated and expecting a reward for their actions.

Money is a great motivator for them and one of their main goals in life is to establish financial independence and maintain the lifestyle they desire.

They know how to recognize quality and they like having quality items for which they’re willing to give substantial amounts of money.

They are cautious about spending their money, but they also know that quality has its price, for which they’re willing to pay.

They often have leadership qualities, although they can have some rush and unpredictable reactions, which can often be a nuisance for their subordinates.

In general, these people are good leaders and they often end up in managerial positions in their life.

They are often directors of their own companies, which is a position where they feel best because they don’t like authorities and often have a problem following guidance from their superiors.

The good traits of Sun in Aquarius and Moon in Capricorn:

The good traits of Sun in Aquarius and Moon in Capricorn:

When it comes to relationships and marriage, people with sun in Aquarius and moon in Capricorn have different approach and opinions.

Some of them might be perfectly fine with the idea of being in a committed relationship with one person or being married, while others might find that idea unacceptable, and spend most, or entire their lives in open type of relationships, never getting married or truly committing to one person.

The moon in Capricorn gives a person a great dose of pride and in general, this sun/moon combination makes the person very inflexible when it comes to making compromises and maintaining stable and harmonious partnerships.

These people often have the need to be listened to and they want they’re saying to be the last. They have a problem with accepting other people’s opinion and that relates to their partners as well.

Their need to always be right and to always have their decisions accepted and followed usually creates great problems in their relationships with their partners and is often the cause of breakups and endings.

These people have strong personalities and they usually desire strong partners. The thing about this desire is that they usually have a problem fulfilling it because of their dominant nature.

Partners with strong personalities also have the need to be listened to or at least desire to make a compromise with their partners and find a neutral solution and agreement regarding the decisions which refer to both partners; that is one of the main reasons why these people end up in relationships with partners who are not as strong as they are and don’t have a problem following someone’s guidance.

These people are usually not very emotional and they have a rational approach towards their relationships, as they have towards any other area in their lives. They are very down to Earth and very aware of every move they make.

They don’t allow themselves lose control in any kind of relationship, especially of a romantic kind. They always need to be in control of their actions and the events which go on in their partnerships.

Losing control or being controlled by someone is something that is completely unacceptable by these people.

On the other hand, they usually have a conscious or subconscious need to control other people, which they often do if they are allowed.

These people want to allow their children the freedom to develop their abilities and talents, but on the other hand have the need to control their actions and their behavior, making sure they follow all the guidelines they have given them.

These people are usually passionate and can be a bit perverted. These sides of their personality aren’t easily seen and are known only by the people who were intimate with them.

They often have a great desire and need for physical intimacy and find their ways to fulfill these desires even if they’re not in a committed relationship with anyone.

The best match for an Aquarius sun and Capricorn moon is an air or earth sign.

They could also get along well with partners who have air and earth elements in their chart.

People with sun in Aquarius and moon in Capricorn are usually rational and down-to-earth, unlike most other Aquarius people.

It is not that they are not prone to eccentric and impulsive outbursts and reactions, but they manage to control their reactions and prevent themselves from making mistakes and suffering the consequences.

These people are usually not very emotional and they have a rational approach towards all areas of their life, which involve their partnerships as well.

They are not partnership material in general because of their inability to compromise and find flexible solutions to the issues with their partners.

They often have a problem with accepting other people’s opinions and they also have the need to impose their opinions on others.

They are very dominant and have a strongly developed ego. Because of their need to always be right, many people find them irritating.

These people have an independent nature and have a problem committing because they desire to enjoy their freedom and the ability to do whatever they want. They don’t allow anyone controling them, but at the same time often have the need to control others.

Although they usually don’t want to have children, if they become parents, they try to allow their children to develop independently at the same time trying to control their actions.

They’re not very emotional and their reactions are controlled and governed by their mind.

These people are passionate and sometimes even perverted which are traits that cannot easily be seen by the people from their surroundings.

They’re ambitious and strive towards success in life. They also like financial stability and they do all they can to provide it.