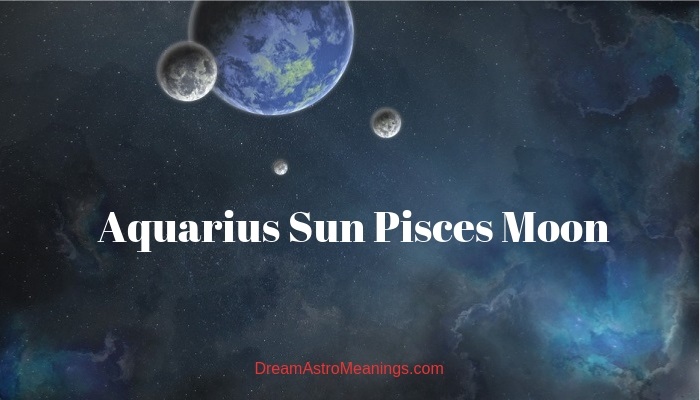 The sun and the moon in our natal chart are possibly the most important planets which determine our basic characteristics and our personality.

Usually, the sun sign traits or characteristics are visible to the people from our surroundings, and the moon sign traits we tend to keep private or we share some of them with the people we consider close.

People with a combination of Aquarius sun and Pisces moon have a character which is a mix of air and water element.

These people have a balanced personality which is a combination of strong intellect and deep emotions. These people are often visionaries who pursue a goal of creating a better future for many people, and sometimes for humanity in general.

These people often appear to the people from their surroundings as strange and often as if not from this world. The main reason for that is often their connection with the other realms outside of visible reality.

To the people who don’t know them, these people often appear mysterious, unpredictable, weird, or strange, and some people even feel fear in their presence. These fears are ungrounded and are based on lack of knowledge.

These people’s actions are usually focused on doing good and helping others. They often use their abilities to heal and help people. These people often choose professions which are somehow related to the invisible realities.

They often have great knowledge in otherworldly subjects. Many of these people have deep belief in the existence of extraterrestrials and some of them have even had some otherworldly experiences and sightings of beings from other worlds.

They are often focused on proving extraterrestrial existence and their involvement in our planet’s happenings. Many of them choose professions such as astronomers, astrologers, pilots aeronautical engineers, or similar.

These people are usually not motivated by material gain and their main motivation is doing well for others and the planet in general, usually through somehow helping people and all living beings.

Because they often feel inadequate and being different from the majority of people, these people might suffer from some psychological problems, such as depression and feelings of anxiety and isolation.

These feelings might inspire these people to find some alternative ways to deal with them.

Some of these people are prone to reaching out for means such as alcohol or drugs or some other forms of addiction to deal with these feelings and emotional states.

For some of these people, the inadequacy and feeling of not belonging to this planet and to the society might be so strong and overwhelming that they end up with some psychological disorders and mental illnesses.

These people are very intelligent and they often have the ability to read other people’s mind.

These abilities enable them to manipulate other people for their own good and in some cases, people with badly aspected sun and moon, might be prone to doing that. They might be prone to lies, deceptions, and other kinds of manipulation.

These people can be fantastic liars and manipulators, which cannot be easily detected and discovered. They might even develop genius schemes to provide themselves some financial gain.

These people are usually not motivated by material gains, but in some cases when their planets are badly aspected they might be prone to use their special abilities to gain them.

These people are usually not very ambitious and they often find it hard to get motivated to succeed in their endeavors and fulfill their goals and desires.

Although they have many talents and are often artistically given and talented, they need a boost from family members or friends or partners to persevere and use their potential fully; otherwise, they might end up failing to use the great gifts that the Universe has provided them with.

In some rare cases, these people might end up broke, as beggars, or in some other miserable living conditions, usually due to their lack of initiative and ambition.

The good traits of Aquarius and Moon in Pisces:

The good traits of Sun in Aquarius and Moon in Pisces:

They have an unusual nature witch is not easily understood by most people. They have interest in areas which many people don’t find interesting.

Their ideal partner is someone who is emotional and interested in unusual activities and the supernatural. They want someone who is spiritual and who will accept their special abilities and that side of their personality, without considering them weird or awkward because of that.

These people can have an adventurous spirit and seek partners who can follow them in their adventures. They are often attracted by some hidden and far-away places.

These people often travel to faraway continents in their quest to learn something about ancient cultures and different people. Their ideal partner is someone who can follow them on these quests.

These people usually don’t have a problem getting into relationships or getting married.

They need emotional fulfillment in a relationship and someone who will be able to understand their sensitivity and adequately respond to it.

These people are very tender and very sensitive, which is why people who are aggressive and have conflicting personalities are not a suitable match for them. These people want to establish a deep emotional bond with their partners.

In turn, these people will be more than happy to spend most of their time with their partners, doing different activities together.

These people love outdoor activities, but are also home types and enjoy spending time there with their partners.

They love children and make excellent parents because they give their children enough freedom and independence, but also give them a sense of security and emotional stability, which is of great importance in the process of growing up.

These people are tender rather than passionate and they might get turned off by very passionate partners. They need some time to get to know a person before they can relax and begin showing their emotions.

At first, they might have a friendly approach to their potential partners, which might confuse them and surprise them when they finally review their intentions.

When they find the right partner, they become very dedicated and loyal, although before that happens that might be prone to experimenting and having multiple partners and gaining experience in the field of dating and relationships.

Some of them continue with such behavior even when they’re in a committed relationship. This usually happens when the person has bad aspects of the sun and moon.

In general, these people make interesting and stimulating partners and it is usually never boring in their company.

The best match for Aquarius sun and Pisces moon is an air or water sign, with water and air element in their natal charts.

Fire and earth signs could also be a good match if they have some air and water in their charts.

Sun in Aquarius and moon in Pisces people are usually very intelligent and interesting. They might be perceived by many people from their surroundings as a bit eccentric and awqward.

The main reason for that is their personality, which can appear a bit like from out of this world.

These people are interested in subjects like the supernatural, spiritualism and similar areas, which many people don’t understand and know anything about.

That is the reason why many people don’t understand them and find them attractive.

These people can have unpredictable reactions and can often perceive themselves as different from others, which can often be a cause for their depressed states and emotional breakdowns, which can in some cases lead them to mental illnesses and other issues with their health.

Sometimes it leads them to addictions like drugs and alcohol or some other types of addictions which they use to forget about their emotional state or ignore it.

These people are usually very emotional and sensitive, but they tend to hide that side of their personality. They usually have a friendly and disinterested approach at first towards people who could be their potential partners.

People often don’t know what to expect from them and they often get surprised when they realise that they actually like them. That confession often happens in unpredictable moment.

They need time to get to know someone and relax to begin showing their emotions. They are tender and not really passionate, which is why they don’t like overly aggressive and passionate partners. They love children and are excellent parents.

These people often choose professions which are related somehow to the outer space, like astronauts or astronautical engineers. They are often pilots and astrologers, or choose some other spiritual professions.

They are often spiritually developed and they seek partners who could have understanding of there interests and their abilities.

They often have psychic gifts, gifts to foretell the future, or healing abilities. They use these abilities to help others.

These people have a helpful and generous nature and their actions are motivated by making good deeds for the human kind.