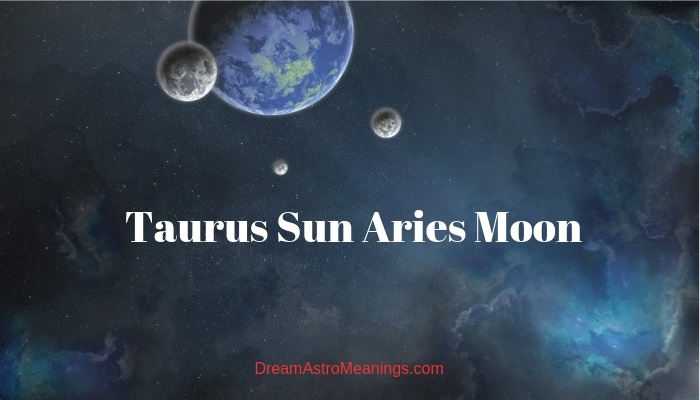 When the Sun is in Taurus and the Moon is in Aries in a person’s natal chart, that person has a blend of earth and fire elements influence in their personality.

People with Sun in Taurus tend to be very stable and grounded. They love comfort and they are willing to work hard to provide it for themselves and the people they care for.

They are usually not prone to making changes and prefer to maintain the status quo in all the areas of their life, mainly because they hate adapting to changes and new circumstances.

With the influence of Moon in Aries, these people become more prone to adventures and making changes in their life. They still love security and comfort, but are prone to making excursions into the unknown and experiencing some adventures.

People with this combination are very enduring and can be very stubborn as well.

When they make up their mind about something, it could be impossible to make them give up or change their mind. That trait often causes them more harm than benefit, although it helps them with achieving their long-term goals.

Stubbornness is a trait which both the sign of Aries and the sign of Taurus express. That is why, it is necessary for these people to work on their flexibility and to try to make compromises whenever it is possible.

These people can be very egotistical and self-centered, which makes them difficult to adjust to other people. They are prone to believing that they are always right and that no one can do things as good as they can.

That attitude can be detrimental for their relationships with other people, and could cause people to avoid them.

People with this Sun/Moon combination are usually very self-confident and have a high opinion of themselves and their values. They have a tendency to impose their opinions on other people, and always believe that they are right.

They have a problem with apologizing to people even when deep inside they know that they have made a mistake or that they have wronged someone. They have a very strong ego which doesn’t allow them to admit that they are not perfect.

These people don’t like to be told what to do, and they enjoy telling others what to do and how to behave. They have a problem with following orders, and that is why they don’t get along well with authority figures.

They are best at leading positions and telling others what to do. They often own their own business because they desire to work for themselves and they are best when they are in that role.

People with this Sun/Moon combination have the capacity to achieve success and are usually financially well-off. Taurus Sun likes security which material possessions could bring them and that is why they are very motivated to provide them.

These people can have very ambitious ideas for their future and have the necessary determination and power of focus to make them real.

These people can have a difficult and inflexible personality, and can be hard to deal with. People often perceive them as “heavy” to put up with. They usually desire to have everything their own way, which is not possible in relationships with some people who desire to have the right to speak and decide for themselves.

As a combination of these two signs, this person is both a sports type and someone who likes to enjoy in the pleasures of life, eating, and doing nothing. They often have periods of extreme activities, followed by overeating and gaining weight.

This is how these people usually function and never seem to find balance, i.e. being active and being able to indulge in good food and things they enjoy from time to time.

They are not very emotional, and they approach to dealing with the issues they have without much hesitation. Taurus influence gives these people an ability to think well before they act, and that limits the possibility of making wrong decisions and mistakes.

The Moon in Aries is prone to emotional reactions and quick actions, but Taurus Sun is usually there to prevent these people from haste moves.

In regards to love and relationships, people with Sun in Taurus and Moon in Aries can appear very demanding.

Their personality is strong and they are not very flexible. They usually live by the motto: it is either my way or the highway, which defines the category of partners they are likely to get along with well.

Their ideal partner is someone who enjoys being guided, organized, and following their lead. A person who doesn’t agree with them much of the time won’t be a suitable match for these people.

They have a domineering personality and they often impose their opinions and their desires onto others, often without being aware of what they are doing. That can be irritating for their partners if they also have a strong personality and don’t like being told what to do.

Their problem can lie in the fact that they desire a partner who has a strong personality and individuality, but these people don’t like to be treated the way they usually behave with others, bossy and demanding.

That is the reason why they often end up with a partner who has a weak and submissive personality and doesn’t mind being told what to do and having their lives organized by their partner.

As spouses they also tend to behave in such a manner. The good fact about these people is that they are reliable and make an excellent choice for a person who doesn’t have organizing skills and seeks security and someone to rely on in a relationship.

These people are good providers and their house usually doesn’t lack anything. They love comfort and good food, and they make sure there’s plenty of that always.

These people are usually passionate and seek physical satisfaction in their relationships.

Fulfilling their intimate desires and needs is very important for them, and their partner needs to share these traits with them. They seek passionate partners who will adequately respond to their passion. They are emotional, but in a rational way.

They don’t let emotions get them overboard, and they have the ability to press the brakes when they realize that they have begun behaving irrationally, influenced by their emotions.

In general, these people are home types, and enjoy most to spend their leisure time at home in the company of their family. They prefer having their friends come over to going out, although their Moon in Aries gives them an adventurous trait, which brings them out of the house in search for new experiences.

As Taurus Sun, these people love good food, and they are often the ones who cook in their relationship or marriage, regardless of their gender. Many men with this combination enjoy preparing delicious food for their girlfriends and wives.

They make good parents, who take care of their children’s needs and make sure they have everything they need. They want their children to be active and often influence them into playing some sports. They also support their creativity and artistic talents.

The best relationship/marriage combination for a person with Taurus Sun and Aries Moon is also a person with earth/fire influence in their natal chart because they will easily relate with this person’s character.

Although they have a Moon in Aries which can give them a dose of recklessness, these people don’t lose control over their actions and think well before they act, even when the urge to act is strong.

They get along better with earth and water signs, than with fire and air signs. They need a partner who is down to earth and stable, someone who they can rely on working along with them on maintaining their relationship stable and lasting.

They don’t easily give up on their goals and ideas, and they keep their focus and put in their energy until they are achieved.

They have a domineering character and like to have things their way, which often causes them problems in relations with other people, especially their relationship and marriage partners.

These people love life’s pleasures and often indulge in them. They are passionate and enjoy physical intimacy very much. They prefer passionate partners, able to respond to their desires.

They take on leading roles in their relationships and usually do all the organization and providing. These people love comfort and manage to provide enough financial and material stability to be able to live the lifestyle they desire.

They make reliable parents who provide all the comfort to their children.

They desire a partner with a strong personality but they usually end up with someone they could easily influence. Their dominant nature cannot get well with someone who has similar traits because these people don’t want to be influenced and demand to keep their free will to decide what they want to do.

On the other hand, many people consider these people ideal partners, usually the ones who lack confidence and need someone to guide, organize, and support them.