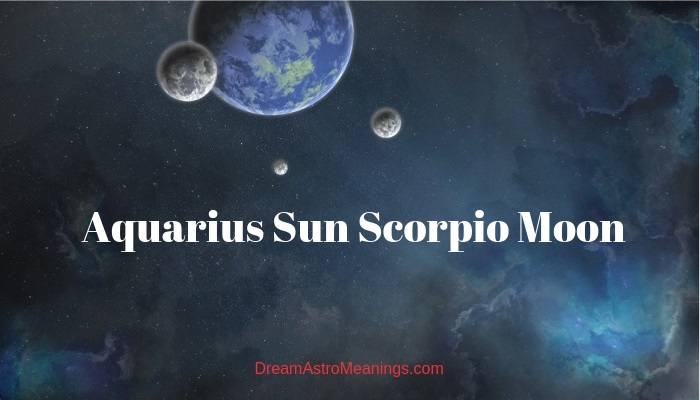 The sun and the moon are the most significant planets in our natal chart.

Our moon side of personality is a side we try to hide from others or we share only parts of it with people we consider close.

People with sun in Aquarius and Scorpio moon have a character which is a combination of air and water element. These people can often have a fascinating effect on others.

The main reason is their unusual, eccentric, unpredictable, magnetic nature, which often has a mystical effect on others and makes them want to be in their presence.

These people usually have some unexplained abilities, such as the ability to read people’s minds, or see into the future, foretell future events, or have some other psychic gifts and abilities or healing powers.

These people are often somehow able to connect themselves with the other realities and many of them have the ability to communicate with beings from other realms and receiving information about their future and the future of others.

These people often have the feeling of knowing things about other people as well as an inner knowing about things and situations.

They somehow know what will happen or what has happened to someone or in some situation. They have a heightened intuition and intuitively feel what they should do in certain situations to ensure the success of their actions.

Some of them might reject changes even when they’re inevitable and they often have a hard time adjusting to changes when they happen.

They are very confident, independent, self-sufficient, and they love their freedom immensely. Anyone or anything that tries to stand between them and their freedom will be removed from their wives.

They are very honest and they don’t have a problem saying their opinion about others and about various situations. They expect honesty from others and dishonesty is something they cannot tolerate at all.

If someone close to them is lying to them or in some other way tries to betray them such experience is one of the greatest disappointment these people can experience.

Their planetary rulers Uranus, Mars, and Pluto are powerful planets, which give these people strong will and powerful personality.

These people are powerful opponents and it is not wise to mess with them.

When their sun and moon are in bad aspects, especially with these planets, these people might be prone to aggressive behavior, conflicting situations, accidents, danger, and other kinds of calamities, as well as attracting people who might bring such circumstances into their lives.

Especially in these cases, these people need to pay attention and control their conflicting reactions and outbursts of anger and aggressive behavior because they might provoke grave consequences.

These people are usually very ambitious and interested in areas ruled by the signs of Aquarius and Scorpio which are usually the latest technologies, telecommunications, all secretive matters, detective work, paranormal areas, or similar or other related areas.

Especially if their sun and moon have aspects with Pluto and Jupiter, especially if they are beneficial aspects, these people might have great sudden fortunate opportunities to earn a lot of money.

They might have unpredictable reactions and be attracted to all dangerous activities, extreme sports, and similar activities. They might be prone to impulsive and angry outbursts, which might put them in dangerous situations. They need to work on controlling their temper and reactions to prevent bad things from happening in their lives.

The good traits of Sun in Aquarius and Moon in Scorpio:

The bad traits of Sun in Aquarius and Moon in Scorpio:

– aggressive, bad tempered, unpredictable, rash, prone to imposing their will on others, controlling, dominate, egotistical, etc.

People with Aquarius sun and Scorpio moon are often magnetically attractive to their potential partners.

These people are very passionate and some of them might have a bit perverted preferences in their relationships.

Their first approach to a potential partner is usually disinterested and friendly. These people are confident and don’t have a problem approaching their potential partners, but they usually don’t show their intention intentions at first.

They often surprise their potential partners when they reveal their intentions towards them.

That often comes later, after they’ve had the chance to get to know them, and taken the time to decide whether they want to pursue a relationship with them or not.

In general, these people desire partners who have strong and confident personalities, but they rarely manage to establish lasting relationships with such partners because they cannot tolerate their will domination.

They usually end up with partners who have weaker characters than them and don’t have a problem with being a follower.

They also want a passionate partner and someone they will be very attracted to. The physical side of a relationship is very important for these people, which is why they need someone who can adequately respond to their desires.

These people are very enduring and focused on fulfilling their physical desires.

In some cases, they might even have a perverted taste and be prone to activities which are not considered normal and approved by the general public.

In general, these people are not again commitments and marriage, but they usually seek partners who will in some way be obedient and prone to be controlled by them.

When they find a partner who is willing to accept this side of their personality, they might establish long-lasting relationships with them.

They desire children and they usually make good parents, although they might have an unconventional approach towards raising their children and giving them as much freedom as possible to develop their personalities on their own.

In some cases, especially with bad aspects of their planets, they might be phone to attracting conflicting partners and conflicting relationship situations in their lives, which could lead to severe arguments and sometimes even dangerous and life-threatening situations.

In general, these people can be devoted to one person exclusivelly, but until that happens, they can be prone to experimenting and changing partners.

When they find the right person, they are willing to devote themselves completely to their partner or spouse and expect the same from them.

They are not able to tolerate betrayal or any other form of deceit in a relationship or marriage and that is a certain reason for a breakup or divorce for these people.

The best partner for an Aquarius sun Scorpio moon is Scorpio or an air sign with strong Scorpio influence in their natal chart.

Fire and earth signs could also be a good match, providing they have Scorpio influence in their natal chart.

People with Aquarius sun and Scorpio moon  usually have a magnetic personality which attracts people to them.

They are very interesting personalities who have something secretive about them. They are interested in all kinds of secretive matters and unusual things. They themselves are often very unusual.

Many people consider them strange and the fact is that they are usually different from the majority of others.

They often have a great knowledge in these areas and they often practice them actively or do research to find more about tem.

These people often have special abilities, such as paranormal abilities, healing powers psychic gifts, or other similar abilities. They often use them to help others,  but help themselves as well.

These people often have a very strong intuition and often have the ability to sense what other people are thinking and sometimes even read their minds. These abilities might frighten other people because they are not something that is common.

They are a dangerous opponent because of all of their abilities. These people are very honest and direct and they detest lies and all kinds of deceit and betrayal.

Such behaviour is a strong reason for them to end the relationship with someone.

They cannot have a contact with a person they cannot trust and they usually end such relationships.

Their ideal partner needs to have the same preferences and should also be able to adequately respond to their initiative.

They are independent and love their freedom, but when they find the right partner, they usually become loyal and devoted and expect the same from their partners.

Until that happens, they might be prone to changing partners and gaining relationship experience whenever they have the chance.