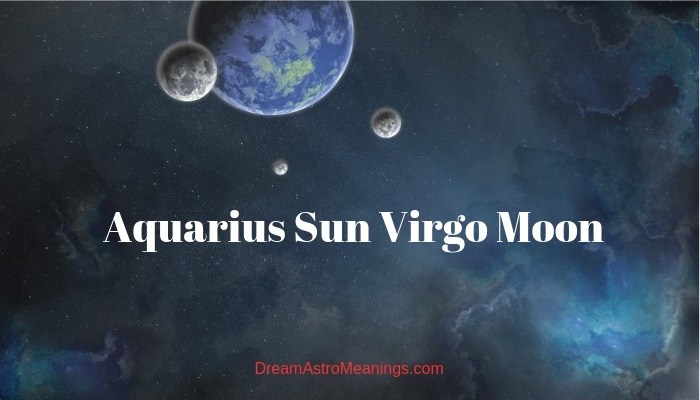 Our sun and moon are the two most important planets, which determine our character and our personality.

The signs where these planets are placed are very important because they give us the description of our character.

People with Aquarius sun and Virgo moon are an interesting combination of air and earth element. These people are very intelligent, quick-witted, and have an eye for details.

They are not typical Aquarius people because the moon in Virgo gives them a dose of rationality and grounds them. They still can be unpredictable and have some surprising reactions, but they usually take their time to think and consider all the facts before deciding or acting.

These people are very curious and are usually focused on the future. They are often involved in some projects that deal with development, innovations, new technologies, and similar areas.

These people are usually educated and knowledgeable. They have an organized mind and usually tend to introduce order and organization in all areas of their lives. They have an ability to organize other people as well.

These people have an adventurous spirit, but unlike some Aquarius people, they are not prone to thoughtlessly putting themselves into jeopardy by doing some extreme activities or practicing some extreme sports.

They still have similar interests, but their moon in Virgo gives them the necessary responsible attitude towards their wellbeing and the wellbeing of other people.

These people love to be informed and they enjoy gathering new information and hearing the latest news.

They might be prone to believing that they know everything best and that they have the right to tell others the way they should behave in certain situations. They are usually not aware that they are intruding other people’s free will and that their behavior is not appropriate.

Quite the opposite, these people tend to get offended when the people they tried to influence, criticize their attempts.

They usually accuse others for their faults without even considering the possibility that they might be wrong. They also have a problem with apologizing to others, even when they know that they should.

These people could also have a tendency of nagging and complaining about everything. They might view all things and situations from a negative viewpoint.

They could also be prone to give themselves the right to tell other people their opinion about them, even if their opinion is offensive in a way.

When others try to behave in the same manner towards them, they usually get offended and stop talking to that person. When these people get angry at someone, it usually takes a lot of time for them to forgive and stop being angry.

These people are not really ambitious, but they are hard workers and consider that their efforts should be well rewarded. They usually never manage to reach high positions and they don’t even want that, but they usually manage to earn a decent amount of income for the work they perform.

These people often choose professions in the field of communication, technology, telecommunication, organization, and similar areas.

They are very detailed and precise, which is unlikely for a typical Aquarius, which can be a bit disorganized. These people know exactly what is going on in every area of their life and want to be in control of its every segment.

They often have the need (subconscious or conscious) to control other people’s lives, especially their loved ones’ lives.

They are usually very tidy and neat and enjoy cleaning their home. They also have an excellent personal hygiene and detest people who are sloppy and don’t take care of themselves.

Mess is something which annoys them and creates chaos and nervousness in their emotional being.

These people get easily irritated and can be prone to outbursts of anger, aggression, sarcasm, irony, and similar emotional states.

The good traits of Sun in Aquarius and Moon in Virgo:

The good traits of Sun in Aquarius and Moon in Virgo:

People with Aquarius sun and Virgo moon are not easy to be in a relationship with.

These people are usually very independent and are quite self-sufficient. They don’t need a partner to feel complete and satisfied with their lives.

These people usually have their own way of doing things and when a partner or spouse enters their lives, they tend to have a problem in accepting the changes their partners introduce around the house.

They often tend to criticize their partners for doing things differently than they do them.

Their behavior and criticizing often irritates their partners and spouses, and that is one of the major issues they experience in their relationships.

Their tendency to criticize and judge their partners’ actions is often the reason for the ending of their relationships.

They should learn to control their reactions and be more tolerant towards other people, especially their partners and spouses. If they don’t manage to do that, they risk jeopardizing all their relationships.

They need to become more respective of other people and more appreciative of them. They need to allow differences and their way of doing things.

This behavior often stems from their self-centeredness and focus on themselves and their desires and needs.

They need to become aware that their tendency to judge and criticize could be the reason for them remaining alone and isolated in the future.

When these traits become combined with their inborn impatience, the situation might even become worse. They need to learn to adapt to other people differences and become susceptible to accepting them.

Because of their character, these people often have difficulties finding a partner who will be willing to tolerate them in situations when they are not willing to change.

They usually end up with partners who are very tolerant and patient and don’t mind being criticized and told what to do.

Because such attitude is not a natural state for any human being not many people can tolerate such behavior for a long time, which is why their relationships and marriages often end up in breakups and divorces.

Their main lesson is to learn to be more tolerant towards people’s differences. They should also stop telling others what to do and how to do things because most people consider such remarks irritating.

As parents they can be very strict and demanding.

The best match for an Aquarius sun Virgo moon is an earth sign with air element influence in their natal chart.

Water and fire signs could also be a suitable match for them, providing they have some earth element in their natal chart.

Their partners should have a tolerant and patient nature, which will be able to put up with their sometimes very irritating personality traits.

People with Aquarius sun and Virgo moon have a character which is a combination of earth and air element.

These people are very detailed, precise, organized, and very intelligent.

They have an excellent eye for details, and they use all facts to make excellent conclusions in various situations. They are excellent organizers and they can organize other people as well.

They often choose their profession in the field of organization and they usually do a great job there. These people are also interested in areas ruled by the sign of Aquarius, such as technology, telecommunications, all fields of innovations, and similar areas.

They are also excellent in the field of communication and often choose their professions in these areas.

They are very tidy and neat, and they take excellent care of their personal hygiene. Unlike typical Aquarius people, these people are very neat, and they detest sloppiness of other people.

Aquarius people are often not very organized and they and are not very tidy either. They are often messy and don’t pay a lot of attention to their personal hygiene.

Some of these people’s major issues are their tendencies to criticize and judge other people.

They often have a belief that they always know everything best and that they should give other people advice, even if they are not asked.

They also give themselves the right to criticize other people’s behavior. They often try to tell other people what to do and how to do things, especially when it comes to things that are somehow concerning them as well.

These people are not easy to be in a relationship with, mostly because of their tendency to criticize and judge. That is one of the major reasons why this people quarrel with their partners and other people.

These are also the main reasons why other people decide to leave them and end the relationship or marriage with them.

These people often experience endings of relationships and divorces. As parents, they tend to be very demanding.