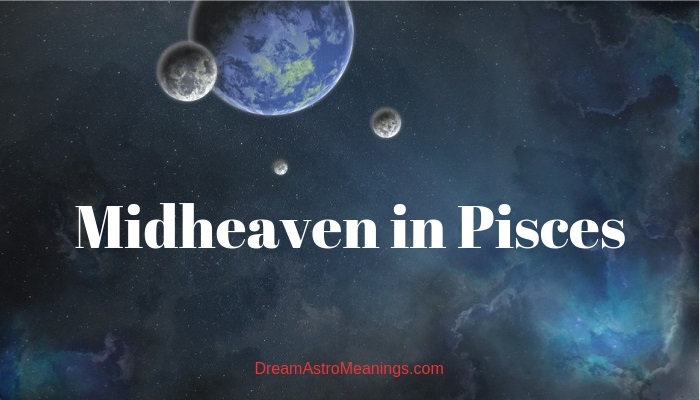 Midheaven is one of the most important elements to consider if we are interested in someone’s social and professional standing, their career and success.

It represents the ‘entrance’ of the Tenth house, the field closely related to matters of one’s reputation, career and his or hers place in the public.

The Midheaven signs determine your path to success, but also your idea of what success is, in the first place.

Medium Coeli, which is another name of the Midheaven, represents the realization of your personality in full and in the world as it is. It is not your intimate character, but your place in the world, the maximum of its manifestation in the world, as it could be.

Midheaven in Pisces makes for rather troubling circumstances, related to one’s social status and professional development.

This is because Pisces is a deeply emotional sign, susceptible to psychic element. Pisces is full of emotions, compassion and intuition, which does not help them much with ambition and determination, but definitely has its good sides.

Midheaven in Pisces is characterized by mixing private area with professional sphere.

These people are incapable of separating the two. If aspects are favorable, they could turn it into advantage.

The Lower Midheaven for Midheaven in Pisces is found in Virgo, which means these people need order and cleanliness in their home and private life. This could make some balance between their flexible approach to professional development and at least some need for order and organization.

It is almost as an artistic challenge to make these two function well together, because these people already mix the two.

Let us first introduce you to the Midheaven meaning in a natal chart and everything relevant to it.

This is an element necessary to understand one’s birth chart and horoscope to the fullest. The Midheaven or Medium Coeli is not commonly mentioned, but in any serious astrological interpretation, it plays an inevitable role. Let us find out more about it.

It is seen in your birth chart. What is this Midheaven anyway? What it represents and what does it mean to have medium Coeli in one particular sign?

These two are like two sides of the same coin that is your personality. The Midheaven is the realization of your personality and it is associated with your reputation, career, your social status and your presence in the world in general. Medium Coeli symbolizes your public persona, rather than your character or personal temperament.

Medium Coeli is like the astrological spotlight; it is impossible to try to hide your MC from the eyes of the public. It is who we are in the world and how people see us. Medium Coeli is about the impression we make, but not always the desired one.

One could become known for bad reputation, just as another is glorified for good deeds.

The Midheaven is the core of our idea of success and our attitude towards it. We could say it also represents the shortest road to one’s potential fulfillment. The Midheaven indicates a type of success we would like to achieve; everybody has his or her own ideals and personal professional goals.

MC also indicates why we would like to achieve anything, in the first place.

On the other hand, it could also directs us towards the best channels to express our potentials and make practical, professional use of them, but also to point out what should we avoid.

Medium Coeli is our final destination, in a way. It summarizes who we are as public personalities; each one of us has their public side. It is not reserved for celebrities.

Medium Coeli for the greatest part represents our image; it is about how other people see us and how they value our work, our professional accomplishments and everything else that has to do with the society. It tells about our social status and our expectations of it.

Sometimes, the reality is different from what we would like, so it is essential to know your Medium Coeli sign.

There are also other elements to consider. Since MC is the peak of the Tenth house, it is logical to assume that the Tenth house itself matters a lot. Indeed, it is so. Planets found in the tenth house, aspects they create, the Midheaven sign…all of them create unique image of you as a public person, a member of the society, with your own reputation, status and appearance.

This astrological field is considered one of the most important astrological houses. The Tenth house is related to the First house, but it focuses primarily on career, professional aspirations and social status.

This field reveals the ways which one use in order to achieve professional success and accomplishment.

In modern, busy world, people are greatly interested into their Tenth house, if they have their birth chart analyzed.

The road to success is unique for each one of us. It depends not only of what stars have in mind for us, but also of our capability to interpret what is there to be found. The Tenth house tells about our capacities and potentials, in terms of professional development and career.

This is the house that is related to how would one achieve their goals and what he or she should do to, in order to make use of talents and skills given.

It is never an easy task; by knowing your Tenth house and the nature of your Midheaven, you are one step ahead of those who know nothing about theirs. The Tenth house reveals what advantages and disadvantages you might have, related to your professional life.

This house tells about expectations you have from yourself, but also about those of others.

This astrological field could indeed direct you towards your dream job and help you more easily pursue your career and achieve success, even glory and public recognition on a bigger plan. However, it could also direct you towards making decisions that seem unrelated to your actual goals at the time; eventually, it shows up these were crucial.

This all means you really have to go deep into understanding of your Tenth house and medium Coeli.

The Medium Coeli is naturally connected to the sign of Capricorn, which is also connected to the Tenth house. However, your medium Coeli could be in any other sign. The element of that sign determines the nature of your motivation; it drives you towards your goals in a specific way.

The sign represents your attitude towards career, success as it is, work, the need to be noticed. It defines the desired reputation, amongst all else.

All of these details are precious. The starting point, which is clearly seen in your Tenth house, regarding professional and social status, means nothing, if you cannot use your potentials. It depends on many factors, such as planetary aspects in the tenth house.

You see, it is a complex subject; your tenth house reveals what you might become, but at the same time there are very likely to be obstacles.

It takes a lot of understanding, patience and wisdom to see through it and learn the best way. This is exactly the reason why some people never achieve public acknowledgement of their work, for example.

Maybe the most ironical destinies are of those people who become famous after they have died.

Some people, on the other hand, have great circumstances and favorable background and, yet, they use nothing of it.

Midheaven in Pisces – Between Emotions and Professionalism

Actually, people with Midheaven in Pisces often cannot divide their private life from their work. Their private, most intimate emotions are often reflected on their work.

The truth is, they take things too personally, even in the working environment, no matter of the occupation.

It would be the best for them to stick to careers that allow them free imagination and free pace; they do not work well under pressure nor are they slaves of order and organization, although their Immum Coeli is about it, but in the private area. They could, however, be attracted to glamorous lifestyle, even diva-lifestyle and it suits them.

They have to be free to express their imagination. They are ruled by intuition, which greatly helps in choosing the right path. However, their reputation is often turbulent, because of their lack of focus and consistence. They are changeable and moody.

As we have said, there is a thin line between their intimate personality and their public personality. With Midheaven in Pisces, there are no clear lines and borders.

This is the reason why Midheaven Pisces are often known for something else than what they do.

They are on bad voice as being unreliable and lost in their fantasy realms. They do show too much of their emotional self in the public, which often marks them as drama queens. Midheaven Pisces do usually make final decisions based on their emotions. They let their intuition leads them and wait for things to happen in their time.

Distinctive characteristic of Midheaven Pisces is that these individuals rarely choose to take risk or go to extremes. For them, life represents a continuum and so does everything else that constitutes life. Career, job, and work in general…these all are only Pieces of the puzzle.

Midheaven Pisces are not ambitious and attention seeking people. Perhaps they are the least interested in being popular.

They possess one excellent quality many others miss. Midheaven Pisces do think according to their needs, not according to others expectations or even their owns. It is interesting, because they are susceptible to outside influences, in emotional terms, which is, in their case, inseparable from their professional aspirations.

Midheaven Pisces are often known as mysterious, elegant and glamorous people. The image of an eccentric, mystical celebrity suits them well. They often achieve fame without even trying or simply stay in the shadows. Their reputation could be marked by scandals of any sort.

Sometimes they have to reach the bottom in order to wake up from their illusions and move forward.

Midheaven Pisces are highly intuitive and emotionally deep, which reflects on their work. The good side is that they do not rush in making decisions and follow more natural path than some other people. They never force things to happen, but wait for favorable opportunity.

If they are capable of making at least some degree of balance between their professional goals and their emotional side, they gradually build their own road to success.

Sometimes they need a dramatic event in order to progress. It could be troublesome, but it is the point that makes Midheaven Pisces see clearly what they want from life.

Once they realize that, all of their qualities flourish.

They are capable of incorporating compassion and understanding into their professional life. If their aspects are favorable, Midheaven Pisces would maintain the balance between the two, which is indeed a rare talent.

They could be indecisive, susceptible of other’s influence, aware of being manipulated, but helpless to change it. They often fail to understand the good and the bad sides of their Medium Coeli; they have difficulty with understanding polarities. They have to experience both, in order to learn about it.

This makes their choices difficult and leaves them with an impression that something is wrong, but they do not know what it is.

They do seem confused between the two, which makes them appear unreliable and very inconsistent in other people’s eyes.

One might find them intriguing, even captivating, but rarely one would rely on them, in the professional sense.

Midheaven in Pisces would choose the best if they opt for music, art, theatre, acting, writing, healing (physical and spiritual).

These careers would give Midheaven Pisces enough of freedom to explore all the angles and depths of their own personality and to let their inner-self go forth.

They cannot control their emotional self and hide it, so it is the best to use it to their advantage. These are paths that would suit the perfectly.