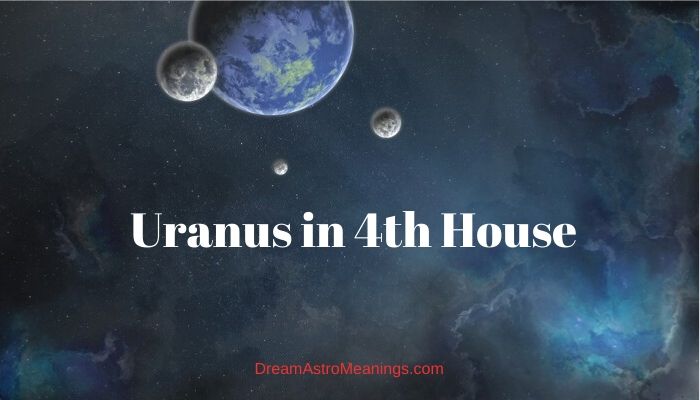 Uranus in the Fourth House is an astrological combination that, at the first sight, appears a bit contradictory.

Uranus is the herald of innovation and change, while the Fourth House is the field of tradition, stability and maintenance. However, things are never as simple as they appear on the outside.

Astrological charts, with all their colorful and unique patterns, reveal precious info we would hardly notice on our own.

Astrological houses represent specific areas of our lives, while the planets inside houses affect our experiences related to concepts that constitute our lives. Planets have their own energies and meanings. Together with houses, they form a unique pattern of a native’s destiny.

Having an insight into your astrological houses is very useful. It helps you recognize your potentials and better understand where you come from and where are you possibly heading towards.

The fourth astrological house is the field of birth, family, ancestral heritage and parental influence over the native’s life.

The Fourth House is the field in which we search for protection, safety and comfort, the field of the cozy family home and the sense of safety we find within the family. This field is associated with concepts of stability, tradition, ancestors, history and patriotic values.

The fourth field shapes up one’s attitude towards all the mentioned. Our perception of family values would depend on our Fourth House situation. This field has to tell about the hidden and secret things, which could be material and abstract.

The idea of a hidden treasure is associated with the Fourth House. It does not have to be something tangible.

We often overlook positive and precious qualities because the carrier appears inconspicuous. As J.R.R. Tolkien has said in one of his Lord of the Rings poems, ‘all that is gold does not glitter’. Through Fourth House, we may discover treasures hardly visible on the surface.

The Fourth House is the house related to our origins, roots, everything that we have inherited, including all kinds of properties, goods, real estates. Our background is to be told through this field.

The fourth field has much to do with traditional values and our attitude towards those. We could say that the concept of ‘hearth and home’ is very descriptive when it comes to this astrological house. This house tells the native where he or she comes from.

This field is linked with the ways the native would preserve and continue family tradition and how he or she perceives the concept of family in general.

The Fourth House represents the bases of your beginnings, the corners stones you start with and build your own life path.

The Fourth House also represents later years of life, the final years. It is the house of endings and of everything you have accomplished.

Uranus was a primordial sky deity and the father of titans, in Greek mythology. According to myths, he was the son of Gaia, the Earth, and also her husband. In Greek cosmogony, Gaia was the essential element, the first to emerge from Chaos, a feminine principle of all creation. Gaia was all-creating and all-nourishing principle.

However, only Uranus encompassed the entire world, so Gaia has merged with him and gave birth to titans, male and female.

Their offspring was quite a colorful, intimidating and powerful lot. Uranus hated his children and he did not allow him to come out and meet the light of the day.

He would hide them in Gaia’s womb, while she felt them as a burden and this burden made her come up with all kinds of cunningness. She created a large sickle and called on her children; she wanted them to punish their father Uranus for his deeds.

All the titans were reluctant to accept this dangerous task; all but Cronus (we know him as Saturn in Roman mythology). Cronus promised his mother he would do whatever she likes.

When Uranus has came to Gaia to make love with her, Cronus waited for him in the shadows. He grabbed his father by his genitals and, using the sickle his mother gave to him, castrated Uranus.

From drops of Uranus’ blood, Erinyes were born, giants and Meliae, a class of nymphs. His cut of parts ended up in the sea and our of the foam around them, Aphrodite, the goddess of love and beauty was born.

After this act, Uranus never met Gaia again; the earth and sky separated. The Earth merged with the Sea, instead and this new union resulted in new offspring, the five sea deities. The myth of Uranus is associated with the beginnings of the world.

In Roman mythology, he was identified with Coelus, the god of the sky, the son of Aether, the goddess of the eternal light. In this version, he was the father of Vulcan, Mercury, Saturn and Venus.

The story of Uranus is interesting, but let us see if there were any similarities with the astrological Uranus.

Uranus in astrology is a planet that represents beginning, just as in the myth Uranus was one of the first, primordial gods or, rather, a personification of the sky itself. Uranus is the first of the so-called transcendental planets, one of the ‘new’ planets, discovered ages after the planets people could see with the naked eye.

Uranus represents everything that takes place here and now. This is the planet of fresh start, of a revolutionary change of sudden and radical changes. The symbol of Uranus is the cross of matter between two semicircles, above a circle.

It means that the soul is connected to the matter and that, through the creative power of the mind, we could raise our spirit to a higher level.

Uranus is a herald of change and innovation; everything new, modern and even futuristic is associated with this transcendental planet. Uranus symbolizes genius ideas, genius mind, originality, uniqueness and everything that is uncommon, ingenious, eccentric, standing out of the mass.

Although Uranus, as a transcendental, distant and slow planet, is said not to have a strong influence upon individual lives, if there were strong aspects, its effect will be visible.

The children of Uranus, so call these dominated by this revolutionary planet, are those whose ideas will definitely leave a mark in the world. Uranus represents the destruction of old established rules and setting up new rules and new order.

Revolutionary movements, rebellions, activism and all such big plan and mass changes are associated with the effect of this planet. Uranus has also to do with psychology, occultism and metaphysics.

The archangel Uriel, who represents ‘the flame of God’, is associated with this rebellious planet. People call his name when they are in need of a change. The angel liberates us from our mental and emotional shackles and teaches us about the power of magnetism.

The effect of Uranus is similar; this is the planet of liberated mind, of sudden and unexpected changes and everything new, innovative and inventive.

Uranus in the Fourth House – Uranus in 4th House

What do we get when this rebellious planet sits inside the house of tradition? Well, they have certain elements in common, in the first place. Both have to do with beginnings, though their nature is very different.

Fourth House is about stability and maintenance, while Uranus is all about revolution, invention and destruction of the old.

In that sense, they seem much contrasted. However, there were way the two ideals could merge and work incredibly great.

If the aspects of Uranus inside the fourth field were positive, the incredibly powerful innovative and revolutionary energy of Uranus could be used in order to preserve and continue traditional values in a fresh, new manner.

There is always a need of change; without changes, there is no growth, no progress. However, it does not mean that everything from the past has to be destroyed, forsaken and forgotten; on the contrary.

Through the power of Uranus, a native with such an astrological combo, could come up with brilliant ideas that would somehow transform the tradition, but not in a way it would lose its genuine value.

Let us give a plastic example. Say your family has a long tradition of making unique type of pottery. You do not have to change the process or the appearance of the product, but you could promote it in a new, modern way, you could incorporate it in a modern project or whatsoever.

Uranus is an ingenious planet and it could work great in this field, if aspects were favorable.

Since this is the field linked to family, home and stability, Uranus in the Fourth House may inspire the native to find new ways of providing for the family or for spending quality time with the loved ones.

There could be some rather impressively innovative ways in decorating and organizing the household, as well. Modern equipment and decorations could upgrade your home experience in a pleasant way.

There is another way of looking at this combo. It all depends on individual aspects and the whole complex of the native’s natal chart.

Many people with Uranus in the Fourth House come from unconventional families, growing up in the environment that is closer to a hippie commune than to a traditional family. Many of them move a lot during their childhood, travelling around the world, without a stable family home base.

They are used to movement and an unpredictable lifestyle, which makes themselves unconventional people. They are incredibly free spirited and open minded, very friendly and interesting to have around.

Their experience of the world is unique, broad, and full of excitement and changes. Now, this kind of lifestyle is not for everyone.

Whether the native would find it inspiring and exciting or chaotic and troublesome, depends on other aspects in a natal chart. These natives are versatile, very flexible, and capable of adjusting their needs to all kinds of conditions and circumstances.

They were taught to be flexible, for they usually come from parents who are of very liberal and open mind.

They are also taught to care about people, but never at their own cost. This makes Fourth House Uranus natives big-hearted, tolerant people, with a strong self-integrity, compassionate and humanitarian.

They perceive all the people of the world as their relatives. Their closest friends are a part of their family.