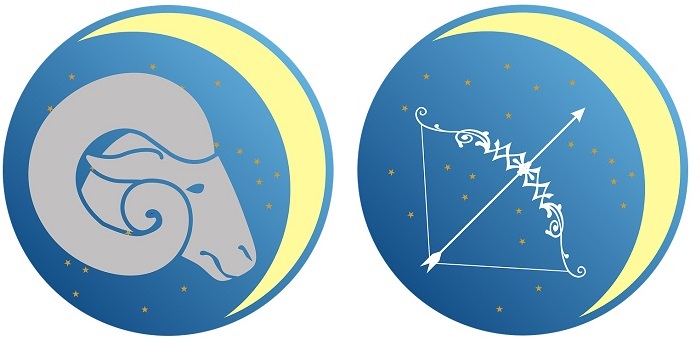 Relationships between men and women are very complex, and they differ in so many ways.

Astrology can illuminate much of these differences and help both partners meet halfway and make the most of them, creating a stable and balanced relationship.

Knowing what the potential issues might be, helps prevent problems from arising if both partners are willing to cooperate and work on their relationship.

Astrology can help much in this process through some insights the partners can gain from the comparison of the astrological data obtained through their date, place and time of birth.

In the next lines, we’ll talk about the relationship potential of an Aries man and a Sagittarius woman.

Aries men are born leaders, although they can be a bit hot-headed and rash, and often lacking the careful and measured approach that some other signs have. They are truly fiery, just like fire, which is their element.

When it comes to relationships, Aries men are direct and straightforward, and they don’t waste their time on long courtships (that is if they don’t have some other influences in their chart that will give them more romantic and sensitive approach to the process of finding a mate).

If he likes a girl, an Aries man will tell her that the moment he realizes that fact, which is usually not long after meeting her and will often expect a quick yes or no to his proposal. O yes, don’t expect this man to wait for your response too long.

If you are not ready for a quick action, he might start looking for someone who is. If you do decide to say yes, you probably won’t be sorry.

Beside their arrogance and high opinion of themselves, which can be well-deserved, but sometimes annoying, these men have a lot to offer. If they are a typical representative of their sign, they are confident, usually successful, active, and full of initiative, good looking and sports types, gallant, direct, and persuasive. This list can go on and on.

You won’t manage to resist this man easily if you have provoked his interest. He enjoys being in the center of attention and don’t be surprised if you end up listening to what he has to say most of the time.

One thing is certain: you won’t be bored because these men have a lot to say and they say it in a confident manner.

They can be self-centered, and sometimes you might feel as if they are not interested in what you have to say, but that is often not the case. Their active lifestyle has provided them with many interesting stories, and they have a desire to share them all with you. You will end up enjoying and listening to them with pleasure.

They are not as tough as they seem, and under their macho façade, a gentle and a bit of a naïve soul is usually hidden. These men are very passionate in every sense of the word. They are very sexual beings and expect their partner to have a similar appetite. Their fire cannot be satisfied with a meek response because they need action.

Their direct approach and enthusiasm can easily be misinterpreted as aggression. These men have big hearts, and they usually wear them on their sleeves. Be gentle with them if you think they are too strong for you. They won’t let you see if their feelings are hurt and will simply disappear from your life.

If you decide to stay for a short while, or even longer with your Aries man, you won’t ever get bored. This man loves his freedom, but when he decides to commit, he can be a devoted partner who will share himself completely with his better half.

Sagittarius women are very passionate and usually quickly fall in love. The sign of Sagittarius is a sign of a fire element, and these women are usually real fire.

They openly express their emotions and their sexuality. They consider long courtships a waste of their time because they don’t need much time to decide whether they like a man or not.

They are also not a traditional type of women, and they are often the ones approaching men expressing their interest. They love adventure and action. Because of their ruler, Jupiter, they also enjoy clever conversations and can be somewhat of a philosophical kind. They always have an opinion on every subject and are not hesitant to express it.

They are attracted to men who are well-read and have something to say. These women are also very athletic and sporty, and they love to have a good looking man beside. Their man must stimulate their mind as well as their body.

These women have an open approach which some people can misinterpret and take for granted. They sometimes appear almost naïve in their attitude towards people and belief that everyone is good.

A Sagittarius woman is eager to make others happy, and that especially refers to her man. She often rushes into a relationship with someone before allowing herself to meet the person better.

That is the reason why they often end up being disappointed when that person doesn’t end up being the right one.

These women are often clumsy, which is a trait they share with the masculine representative of this sign. That only adds up to their irresistibility.

They are spontaneous, childlike and often shy. They love a good laugh, and if you choose this lady, it is certain that you won’t lack fun and adventure. They love traveling, so prepare to experience a lot of movement.

If you are not that kind of guy, don’t be surprised if she wonders off alone or with some friends, after you have refused her call to go with her.

She doesn’t think it’s something special. She wouldn’t mind if you did the same if she wasn’t interested in doing something you’d like. As she matures, she tends to be more grounded and settled, but the desire to explore and gain knowledge will never leave her.

You will need to accept that and share it with her. Before she becomes ready to commit in a serious relationship, a Sagittarius woman might change a few partners. She loves her freedom way too much to give up on it easily. Once they commit, they are loyal and honest partners.

These two are a good match because they share a common love of adventure, they are direct, open, love to communicate, openly express their desires, they are passionate, they can both be childlike and naïve, and they know to recognize these common traits in each other.

They both don’t waste their time on courting each other and get right to the point. The Sagittarius woman will be happy to answer the direct approach of the Aries man.

Their love is sparkly and passionate. People in their vicinity can almost feel the energy they spread around as a couple. Their love won’t end up in a stalemate because they will keep refreshing it with more dynamics.

One of the major differences between these two is that the Aries man is a cardinal sign, while the Sagittarius woman is a mutable sign. And that fact can be a cause of potential issues.

Namely, the Aries man usually knows where he is headed in life and has strict goals he aims to accomplish, while the Sagittarius woman can sometimes be confused with way too many choices and ideas.

If she is smart enough to let her man focus her in the right direction this can indeed be a good relationship they will both know to appreciate and learn from.

There is a lot of potential for growth and expansion for the both in this relationship.

While in a romantic relationship an Aries man can be intrigued and excited when his Sagittarius partner tries to be the dominant figure in the relationship, when it comes to the marriage compatibility of these two signs, there can be a bit of a power struggle about who will be the dominant side in this marriage.

The Aries man won’t easily let the leadership role to his better half, so this marriage has a chance of surviving if the Sagittarius woman is willing to let her man be the leader. He will know how to appreciate that and be willing to allow her strong personality to express whenever there is a chance for that.

If she is wise enough, they can create a strong partnership built on mutual trust and cooperation.

They are both very passionate about the things they do, and when they overcome their power issues, they can be very successful.

They can also succeed in a business partnership as well. They are good partners for parenting their children, and their children will never lack fun and games.

Their parents will gladly bring them to all the fun places enjoying as much as their kids, if not more.

Aries man and a Sagittarius woman can form strong friendly bonds, which can last a long time and often a lifetime. If they are not romantically interested in one another, these two usually share many similar interests and enjoy doing things together.

They both love sports activities and this area can be the one where they can get along very well. They can enjoy a friendly rivalry if they compete against each other or be the best allies if they are on the same side of a team.

They also love traveling together and doing other fun activities. They are both outdoor types, so any kind of activity which takes place outside the house suits them perfectly. They both have similar fiery natures, so they can sometimes be on the verge of quarreling over things they don’t agree about.

Fortunately, they usually manage to overcome such situations and often end up laughing about the things for which they almost killed each other.

These two share a lot of common traits. Both don’t like to be tied down, and they love their freedom very much.

They are very passionate and have a powerful libido, which is maybe one of the strongest points of their attraction, at least at the beginning of their relationship. Both of them are open and direct about their desires, which can surprise them at first, being accustomed to different reactions from other more withdrawn signs.

The Sagittarius woman is more prone to pleasures and enjoying life, which can sometimes be strange and difficult to understand and accept for the action-oriented (almost military type of person), that the Aries man is.

In return, they can teach each other to embrace some other parts of their personalities and experience life to the fullest.

Relationships between an Aries man and a Sagittarius woman are usually good ones.

These two share a lot of similarities, and if they overcome the need to fight for dominance and lead, they can form strong bonds which can last a long time.

They share a lot of common interests and their characters are similar, so they can get along well in a romantic partnership, a marriage and as friends. Their relationship is a genuinely easy-going, filled with laughter and fun, they both enjoy.