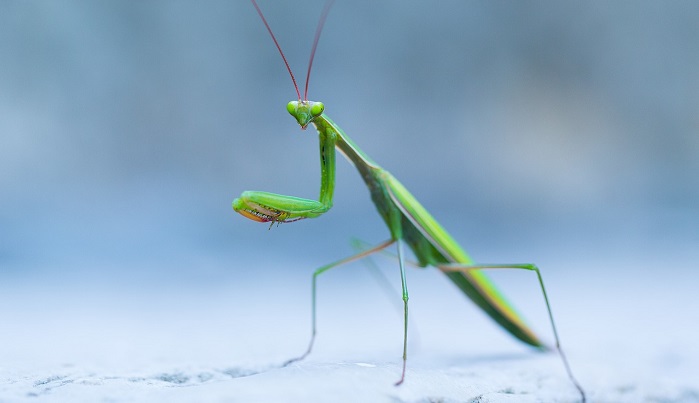 The praying mantises are insects which are worldwide spread, usually in temperate and tropical parts of the world. These insects have unusual looks, which resembles an alien.

They have triangle shaped heads with big bulging eyes. Their head is connected with their elongated bodies with their flexible necks. They have long forelegs shaped like hooks which enable them to grab their prey more easily.

The forelegs are folded if not used, and their posture looks like they are preying, hence their name, praying mantis. The praying mantises were given unearthly powers by some ancient civilizations, like the Egyptian, Assyrian or Greek.

Their earliest fossils are found in Siberia and are considered about 135 million years old. There aren’t many mantis fossils and they are often found in amber.

Surprisingly, these insects are often kept as pets.

These insects are fierce predators. Their usual life span is around a year. The praying mantises which live in colder climates usually die after laying their eggs. Female mantises are sometimes known to eat their mates after mating with them.

These insects are truly weird looking. They have a triangle shaped heads, two bulging eyes and three small eyes, and on the top of that, they have a pair of antennae on their heads as well.

Their necks are also extremely flexible, and some species can rotate their necks almost 180°. The body consists of three parts, and the part (prothorax) which has the head and the forelegs is considerably longer than the other two body segments.

They also have two grasping forelegs which they use for catching and securely holding their prey. On the top of the forelegs are two-toed claws.

Some praying mantises have wings, and some don’t. They have a stereo vision and they locate the prey by their sight. They mostly hunt by day, but some species fly at night, usually males.

They usually feed on live prey they catch. They are excellent at camouflaging themselves by not moving and waiting for the prey to approach to them, as well as using their color to blend in the surroundings. They also catch prey by stalking it with slow and stealthy moves.

The larger praying mantises sometimes eat other mantises, as well as frogs, lizards and small birds. They are also eaten by them, as well as by spiders, large hornets and ants. When the prey is within their reach they strike fast and grasp their prey with their claws. Some species even run after their prey. 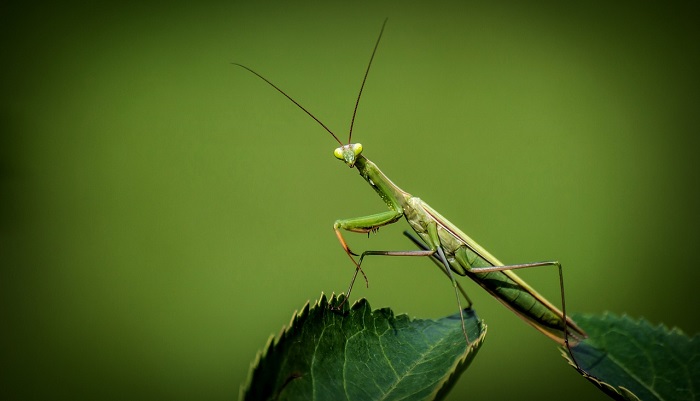 The praying mantises use camouflage as their primary means of protection from predators. Most of them have colors which enable them to blend into their surroundings. Some species even mimic flowers and that way attract prey to them.

When threatened, the mantis often stands tall, spreads its forelegs and fans its wings. That makes her appear larger and more dangerous. It could also strike at the attacker trying to pinch or bite it. Some species even produce hissing sounds to scare away the potential attackers.

These insects exhibit rhythmic side to side movements, and it is presumed that they do that to mimic the moving the grass or vegetation in the wind, also for the purpose of camouflage.

The praying mantises which live in tropical climates mate during the whole year and they mate in autumn, in areas with temperate climates. The adult praying mantis goes through three stages of growth: the egg, nymph and the adult. The life span of praying mantises could be 4 to 8 weeks for the smaller, and 4 to 6 months for the larger species.

Praying mantises are known to exhibit sexual cannibalism. That usually happens when they are in captivity, but also in nature. After the copulation is finished the female eats the male.

They selectively eat the smaller ones. Some males escape being eaten by the females. The reasons for such behavior are not fully discovered.

What does the Praying Mantis Symbolize?

These insects have an almost hypnotic influence on their spectators. They have slow graceful movements which resemble a slow dance. The praying mantis is a symbol of calmness, peace and truth, as well as inner peace.

They also symbolize precision and careful thinking before taking actions.  Praying mantises also symbolize good luck and they are a sign of mindfulness as well.

The Meanings of Praying Mantis as a Spirit Animal

The Praying Mantis as a spirit animal can have many different meanings. Here are some of them:

Peace, balance and meditation. The praying mantis has slow and almost hypnotizing, controlled movements, which enable it to blend in the surroundings. Just observing it instills peace in the observer. The mantises are a symbol of peace and remind you of the need to be in harmony with your surroundings and find peace within yourself and the circumstances you are in.

The praying mantis totem animal is asking you to spend time with yourself to meditate and contemplate over your life and your next actions.

Stillness. The praying mantises are still and peaceful insects. They spend much of their days peacefully thinking and planning their next actions. This totem animal is asking you to take your time to be still and think in quiet about your next moves and actions.

Intention. The praying mantis always contemplates on some action and when it makes her mind it goes after its goal, whether it is catching prey or something else. The praying mantis as a totem animal teaches you to focus on your goals and after that, take action to pursue them.

This spirit animal teaches us about the need to have clear intentions so we can know which action we need to take.

That way we don’t risk missing any opportunity, or we can spot danger in time and react accordingly to protect ourselves or escape.

Strength and determination. The praying mantis has the power and determination to kill prey larger than itself and eat it. As a totem animal it teaches us that we need to have faith in our strength and abilities to achieve whatever we set our mind into, although it might seem impossible.

Camouflage. The praying mantises are masters of camouflage, both when they are hunting as well as when they are hiding from predators. They use their color to blend into the environment, as well as their stillness tactics to get closer to the prey and catch it, as well as to escape potentially becoming someone’s prey. This totem animal is teaching us about the usefulness of being out of the spotlight.

Not everyone must know what you do or what your plans are. That way you protect yourself from people who don’t have good intentions and could potentially prevent you from achieving your goals or harm you in some other way.

Praying Mantis as Your Totem Animal

If the praying mantis is your spirit animal, you are most likely a very thoughtful and peaceful individual.

You like to take time to think about your future actions and decisions. You plan your moves carefully, trying to avoid mistakes as much as you can. You are patient and wait for the right time to come to take actions, and because of that you seldom ever make mistakes.

These insects are believed to be in contact with the divine and otherworldly powers. They receive their guidance from them. If the praying mantis is your totem animal, you are most likely very spiritual and receive guidance and answers from the divine.

You probably don’t rush with anything. You know you need to take your time and live your life according to your beliefs. You most likely never do anything without thinking about all the details and possible consequences of your actions.

Regardless of your usual behavior, you are also able to take action in an instant, and be very decisive if you need to seize or make the most of some opportunity.

What if the Praying Mantis Appears in Your Life?

When the praying mantis appears in your life, it is a good sign because it announces a peaceful and happy period in your life.

It could also be a reminder to take some time off and dedicate it solely to you. Meditate over your life and about your plans, and decide in peace which actions you need to take.

A praying mantis could appear in your life during times when you are overwhelmed with duties and activities.

If that is the case, the praying mantis is asking you to take time off, delegate or postpone some of your duties if you can, so you can rest and charge your batteries.

This totem animal often comes into our lives when we need more balance and peace in our lives.

When to call on Praying Mantis?

You should call on Praying Mantis as your spirit animal when:

If a praying mantis entered your dreams, such dreams could be a sign of someone possibly ignoring you in reality. Mantises could also announce danger approaching, and warning you to be careful just like the mantis to prevent something bad happening to you and to avoid the danger.

A praying mantis could also be a warning against potentially harmful and deceitful people who might hurt you deceive you, if you are not careful enough.

If the mantis was attacking a prey which was larger than her, that dream could be a sign that you need to overcome or confront your fears.

If the praying mantis attacked you in the dream, such dream could be calling you to take some time off to relax and possibly meditate.

A praying mantis hunting prey in a dream could be a sign that you need to be patient. Wait for the right moment to take some action regarding some goals you have.

This dream could be asking you to follow your intuition regarding some situation you are currently encountering in your life. Listen to your inner feeling to find the answers you seek and take actions according to them.