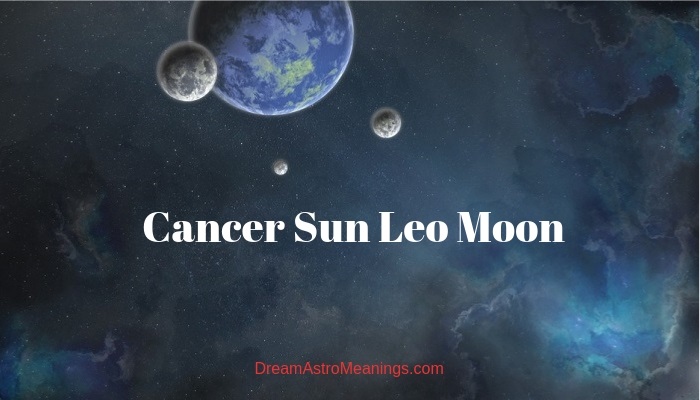 The Moon is our inner being and our subconscious side of personality and is a part of us we don’t like to share with the majority of people.

Instead, we keep it for ourselves or we share it with people we trust and love.

People with Sun in Cancer and Moon in Leo have a huge discrepancy between their outer and inner personality. On the outside, they appear shy, reserved, and not very confident.

That is usually how their true nature is. On the inside, these people have a very high opinion of themselves and believe that they deserve best and often feel that they have been deprived of the things they feel they are entitled to.

That is what creates the gap between what they feel that they deserve and what they can actually accomplish because of their lack of confidence and other limitations of their personality.

Their ego is often enormous, but they don’t have a true capacity to satisfy its needs.

These people often appear loud, demanding attention, full of themselves, etc. Their insecurity and their need to be accomplished and praised for their value are not a good match.

They might not be aware of that fact, but their sense of inadequacy is clearly visible to most observers.

On the other hand, many people who have a superficial outlook on others are fooled by their fake appearance of confidence and courage.

The main issue these people need to overcome so that they could balance their personality inconsistencies is to accept all their traits as an equal part of their being and learn to love them and be proud of them.

Almost everyone should see through the façade of false security and confidence they are trying to portray about themselves.

That way they won’t need to pretend to possess these traits, but they will actually be representing their true self.

People with this Sun/Moon combination usually desire to have substantial material possessions and to have enough money to support their desired lifestyle which includes a lot of luxury.

These people love to pamper themselves and can behave rather spoilt when it comes to fulfilling their desires.

They are usually capable of providing enough to be able to buy themselves the luxurious items they crave for, but some of them rely on their family, partners, spouses to provide them for them.

Some of these people don’t have a problem being dependent on the people who care for them and wait for them to fulfill their needs and desires. It is fair to say that usually women are the ones who have a tendency to behave in such a manner, lot more than men with this placement.

Although Cancer is a sign which is prone to accumulating money and material possessions, in combination with Leo, these people might have a changed perception on spending money, and being prone to spend more than they should.

When that happens and they jeopardize their financial stability because they were recklessly spending and buying luxurious items they don’t actually need except to show off to others, they feel miserable and often cannot enjoy these things.

Leo’s pressure on Cancer can be overbearing for these people if they don’t learn how to control its influence and use only the best this sign has to offer. They should learn how to defend themselves against the urges it provokes in them.

When they learn to balance their Sun/Moon energy, these people will be able to make the most of their traits. They can be very successful in their careers and are very reliable and dependable people who instill trust in others.

By learning to reverse their weaknesses into advantages, they will be able to use the full potential of their personality.

They are good friends, always ready to help. They love being in the presence of the people they love, and usually invite them to their home where they are excellent hosts to them.

These people are very attached to their families (close and wide) and tend to spend a lot of time with them. Some even live in the same household with members of their wider family and enjoy it very much.

They love the feeling of warmth and love which people they love provide for them.

The good traits of Sun in Cancer and Moon in Leo:

The bad traits of Sun in Cancer and Moon in Leo:

– needy, dependent, reckless with money, having a false picture of their abilities, insecure, lack self-confidence, etc.

People with Cancer Sun and Leo Moon can be very demanding when it comes to their romantic life and relationships.

These people can be very emotional and unreasonable in their requests towards their partners. They are often perceived as spoilt and difficult to please and it is not easy being in a relationship with them.

They are sweet and kind people, and love making others happy and pleasing them.

On the other side, they can be very demanding towards others when it comes to fulfilling their desires and giving them proofs of affection and love. They are deeply insecure and try to mask that trait with being overly loud, grumpy, moody, etc.

They are prone to emotionally manipulate their partners and spouses to get what they want. Many of these people do it unconsciously, driven by their desire and the feeling of insecurity and inadequacy.

They can easily be hurt, and they often try to prevent that by attacking people verbally without reason other than their presumed imaginary attack which is about to happen.

They need to work on building their self-confidence because it might be very hard for them to maintain their relationships and marriage due to the conflicts and misunderstandings with their partner which could arise as a result.

These people have a deep need to be loved and cared for but they don’t always express it in the right manner.

Their partner needs to be a person who is able to understand their psychology and realize that underneath their loud and often arrogant behavior is a gentle and tender being who doesn’t know how to properly express their personality.

They need a partner who can be tolerant towards their frequent mood swings and understand that their need to brag and be in the center of attention is only a reflection of their insecurity and need to be accepted.

They need someone who will help them overcome their insecurities and gain confidence.

These people usually have a traditional outlook on relationships and prefer to formalize their relationships in a form of marriage. They are usually devoted, faithful and loyal to their partners and spouses and expect the same.

When they find the person who matches their desires and relationship criteria they don’t waste much time and usually marry. They usually desire to have their family and establish it soon after marriage.

Usually, these people have a tendency to marry young and establish their family at a young age.

They help them with their home works, play with them, travel with them, and are in other ways involved in their lives.

Sometimes they could be overbearing to their children with their care and attention.

The best match for a person with Sun in Cancer and Moon in Leo might seem unlikely, but it is a person born in the earth sign element.

These people need enough tolerance and patience to deal with this person’s contradictory character and help them overcome the differences in their personality and embrace them as a part of their uniqueness.

Water and fire signs are also a good match to some extent, but preferably with some water element.

Air signs are less likely to be a good match for this person and should be avoided, unless they have a strong influence of some other element in their natal chart.

People with Sun in Cancer and Moon in Leo have a personality which is a bit discordant.

In general, their nature is timid and they lack confidence, but their moon is making them put on a mask of arrogance and confidence which is usually easily visible to their observers.

These people often believe that they deserve more than they are actually receiving, without being aware of their own fault for that.

They can be prone to accusing others for their incompetence and lack of accomplishment and they will never be able to achieve anything until they realize that the problem lies within their idealized picture of themselves.

In their minds these people are very accomplished and successful and they cannot seem to understand why that isn’t happening in reality.

The fact is that they need to work on accepting their weaknesses and begin working on building their self-confidence and faith in their abilities.

When they accept that they are not as perfect as they believe they are, they will begin changing their personality and accomplishing their desired results.

They are good and kind people, who are always ready to help others. They are good and faithful partners and spouses and good parents to their children. They prefer a stable home life and the security which family and their love provide for them.