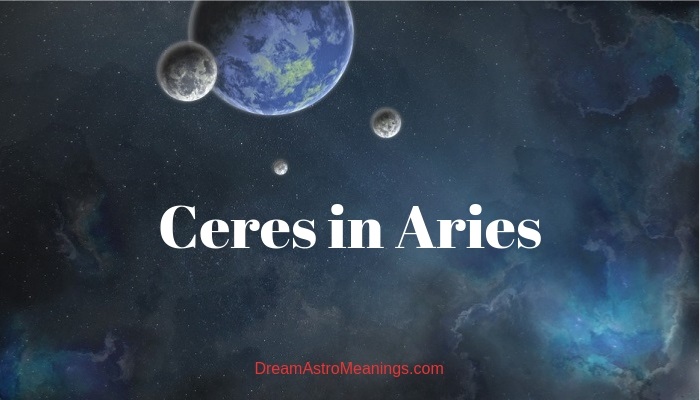 Ceres is one of the oldest deities of Roman and Greek mythology. Ceres is her name in Roman pantheon, while it is Demeter in Greek. Ceres or Demeter was the goddess of agriculture and crops, of nature and growth, harvest and abundance.

Demeter had a daughter, Persephone, whom the god of the Underworld, Hades, fell in love with. He stole Persephone and took her to his cold, dark underworld kingdom.

According to myths, Demeter has taken aback all her blessings to the world, leaving lands barren, cold, empty and poor, first out of despair and grief and then out of raging anger. All land was dying; the earth went dry, the plants died, the people got hungry, poor and sick.

The legend ends with a compromise between Demeter (Ceres) and Hades (Pluto), about Persephone’s (Proserpine’s) whereabouts.

For a part of the year, Persephone would stay with her mother, but some months she would spend underground, with her husband. The myth partially explains the changes of seasons.

The period Persephone is in the Underworld is the time when all vegetation stops, the winter. In other days, Demeter, the goddess of vegetation, is happy and all the earth flourishes.

Ceres is a deity older than Greek and Roman mythology, in fact. Before classical period, there were many variations on fertility, abundance, vegetation deities. All of the myths are similar, except for one thing.

Only in case of Demeter, Persephone and Pluto, there is the daughter abduction motif; it explains the coming of the new age of men dominance.

There is another interesting moment in here. Pluto was Proserpine’s uncle, so here we also have an incestuous activity. It is also interesting to note that this incest was something approved by the gods.

According to the myth, Zeus was aware of what happened and he allowed it.

He was also the one to make the final decision about Persephone’s final destiny.

What does Ceres represent in astrological terms? All heavenly bodies incorporated into astrological system carry archetypical meanings of ancient deities.

Ceres is an asteroid, in astronomical terms. It is an interesting element to look out for in a natal chart.

Ceres represents a mother, a nurturing figure. It symbolizes care and motherly love, in the first place.

Ceres represents our own care for others and our ability to offer love and protection. It also has to do with the opposite; Ceres is also about the restriction of connection with someone dear, with processing distancing from people, with control of others.

Ceres is sometimes depicted as an old woman, the goddess of burial and taking care of mortally ill.

Ceres also symbolizes hard times in one’s life, related to family or close people, similarly to what Proserpine, her own daughter, experienced. Ceres reflects us as children, as those who need protection and care.

The position of Ceres in one’s natal chart could show where our weaknesses lie, in these terms.

Transits of this asteroid help us deal with unavoidable loss; such as, for example, the loss parents feel once their children leave family home.

Ceres guides us through all such hard times. Ceres always represents a mother and all that mothers have to go through. Ceres stands for both motherly love and devotion, as well as for motherly sadness and loses.

It is also closely related to dramatic changes that lead one to maturity; something sudden and before time, such as the motif of abduction and rape, as seen in myth of Proserpine and Pluto.

Regardless of the type of violence, a person learns that traumatic events often indicate signs of potential sovereignty.

Remember, Proserpine suffered a great deal, but she also became the queen of the Underworld.

Ceres always represents our nurturing capacities and the way we care for other people.

Ceres in Aries indicates an active care; it is always closely related to physical activity, since Aries is a very active sign, fierce, determined and fiery.

Ceres also reflects our own need for being cared for in specific way. Those with Ceres in Aries are not particularly gentle and cuddly.

They do not show affection in gentle, pampering way, although they often search for such kind of attention in others. They are fierce and very straightforward; they would never do sweet talk, but they always hit the center. They often appear as they need no pampering and gentleness, but it is not true.

Ceres Aries people occasionally feel lonely and they lack other’s gentle attitude, simply because they appear as they do not need it.

They are very outgoing, daring, active and sociable. Especially Ceres Aries children are like that. They are friendly and playful, enjoying all sorts of activities.

Do not get wrong, they do need their parent’s gentleness.

Even though they could instinctively reject it, do not get fooled by it.

They do care and they usually do everything in their power to make their dear ones feel safe and secure. They show it through deeds, no sweet talk or gentle gestures.

Ceres Aries grow through encouragement. They value independence and self-reliance.

They usually have clear goals. You should encourage their activities, as long as they are positive, of course. They refuse gentleness and do not like to be seen as weak.

Other’s kindness often makes them feel as if others see them in need of saving.

Ceres in Aries is an active care. Ceres Aries people do not express their interest, affection and care through sweet words or cuddling, but through activity.

They need action in order to grow. Ceres Aries people love challenges; even care is a challenge for them. They would climb to the top of the mountain to get the best for their loved ones, but they would spend not a minute cuddling with you.

Since they themselves value independence and self-determination above everything else, they would see to support the same qualities in others.

They are supportive and encouraging friends, parents, siblings, and partners. They would make you feel motivated; they would help you keep with your dreams and bravely working on realizing them in reality.