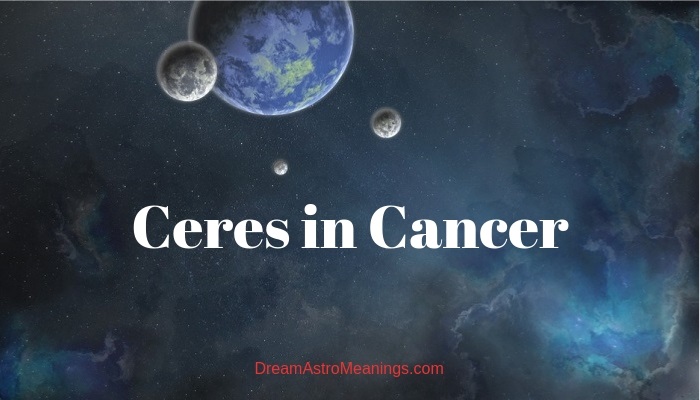 Ceres was an ancient Roma deity, equivalent to Greek Demeter.

The asteroid Ceres we are going to talk about is named after the goddess.

Let us find out more about the mythical background of this ancient deity.

Astrological elements, planets and planetoids all carry archetypical meanings of gods they were once named after. Who was Ceres and what does she represent?

Demeter or Ceres is the goddess of crops, fertility, abundance, motherly love, care and protection. This deity is archetypical Great Mother, the Mother Earth. Ceres gives us crops, food, supports vegetation and all living life; she feeds and takes care of us all.

Origins of this deity are much older than classical period. Mother-goddesses of fertility and life are present in many ancient cults, older than Greek or Roman.

Ceres embodies these concepts. In classical mythology, the story of Ceres is highly symbolical and has to do with what Ceres means in astrology.

The story says about her beloved virgin daughter Proserpine (Persephone in Greek version) and Pluto (Hades), the god of the realm of the dead. Pluto wanted to take Proserpine to be his queen. He took her by force and so she became his wife.

Sad and angry, Ceres stopped caring for the world and so once beautifully green areas became wastelands, all vegetation went dry and people and animals became sick and starving.

The myth that features this cruel motif of abduction and rape of the daughter possibly suggests two more things. It tells about the age of the dominance of men, but also about sovereignty achieved through suffering.

The myth ends with a solution to satisfy both sides. Proserpine was meant to remain Pluto’s queen, staying some months by his side; other months, she was allowed to get back to her mother.

These cyclic phases of Proserpine’s life and Ceres blessings to the life on earth correspond to seasons’ changes. Ceres, the archetypical mother, embodies all ideas related to unconditional motherly love for her children.

Apart from being an agricultural deity, Ceres is even more important as a motherly, nurturing and caring figure, as seen from astrological perspective. Ceres is an asteroid and actually the smallest planetoid registered within the Solar system.

In astrology, it answers to questions about care and protection, bonds and nurture in one’s life.

It tells about one’s care for others and his or hers expectations of others, in same terms.

Ceres in a natal chart represents your abilities related to care for other people. It tells about the ways you show your care for them and about what you expect others to care for you.

It also suggests a bit dark potential; it tells about restrictions related to love and care. It is also about compassion and family bonds.

For example, the position and transits of Ceres could decide the way parents are going to deal with the fact that their children are eventually going to leave them.

The position of Ceres in your birth chart reveals your source of nurturing force, as seen as two directional.

It is always about what you offer others and what you would like to be offered with.

Ceres is always about some form of connection, but also about separation or, more precisely, dealing with separation. Ceres helps us survive our loses and accept them, just as the goddess had to accept her daughter Proserpine’s destiny.

Ceres is not solely about the way we care or what we would like to be nurtured.

It also shapes up the way we are actually going to accept others care, others’ love, worry and help.

There are people who seem to get offended by being kindly asked if they need help, there are those who cannot wait to get a word of love and support or a warm, hearty hug. The sign Ceres matches in a natal chart tells about these ways.

Those with Ceres in cancer love to serve people, in terms of being excellent hosts, for example.

They offer much; they always welcome people with an open heart and make others feel at home at their place. They show their love and care through many gestures, both through words and deeds.

However, they feel hurt and offended if others not to act the same.

Cancer Ceres people have this strange caring and nurturing related imbalance in relations with people.

They would do whatever it takes to be great, hospitable and caring, but they often feel really uncomfortable when others serve them. They are in conflict within about this, because they expect to be treated the same way they treat others and, at the same time, it makes them feel uneasy.

This comes from their great sensitivity and tendency to be insecure about their own worth. Cancer Ceres could be childish about this. They want attention, but then they act as they did not ask for it.

Once they are not given enough of it, they get irritated, offended and depressed about it.

They are sentimental people. If they were not given enough praise for their kind deeds, they feel (and act) as if the life is a disaster and everyone hates them.

Some Ceres Cancers tend to be too emotionally demanding, especially if they lacked parental care in younger years.

There is a risk of trying to find comfort in food, since the food is emotionally experienced.

Ceres Cancers are sentimental people who would rather serve and please others than receive the same from others.

They, however, expect to be praised for all of these kind deeds. They deem it ungrateful and unfair if others do not thank them for thousands times. They also find it uneasy to accept the hospitality of others.

They are mentally, emotionally and physically there for people they love and support. They could be incredibly loving parents, good and loyal friends, devoted lovers and partners.

The family and tradition is where they find their nurturing energy.

Cancer Ceres should probably work on self-acceptance, because it reflects on their inability to accept others differences in terms of showing gratitude, in the first place.