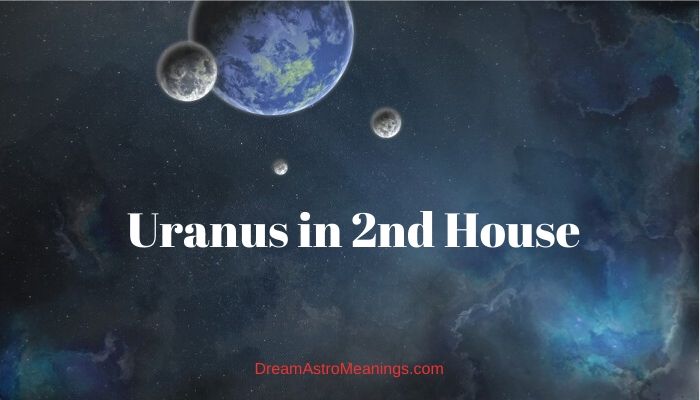 Uranus, the sky god, was the first ruler of the world, after the Chaos, according to Greek mythology.

In astrology, Uranus represents beginnings and it is the first in the row of so-called transcendental planets.

This planet represents our presence, our current moment in time; everything regarding Uranus is about ‘seize the day’, it is all here and now, while boldly looking into future. Uranus is a rebel and a herald of sudden change.

Uranus is associated with everything modern and novel, with risks, with experiments, magnificent inventions, ingenious ideas and concepts; nature of Uranus is that of a brilliant inventors and unique personalities, of all the eccentric people stepping ahead of their time.

This is the planet of revolutionary spirit, of rebellion and of everything radically changing.

The children of Uranus are people who would leave a mark in this world, for their uniqueness and their bold, rebellious spirit.

People interested in unusual activities, hobbies and occupations are under a strong influence of this airy planet. Uranus is about crossing lines, about separation and about reforms in all fields of human life.

Astrological houses are fields in astrological charts. There were twelve houses and each one of them represents an area of people’s lives.

In natal charts, you will find some of your houses have planets inside, one or more than one, while some houses could remain empty. Those with many planets would be very dynamic and specific.

Empty houses will not remain dormant, of course; you should see into the position of a ruler of a house, in order to find out how things work in there.

Houses could be angular, succedent and cadent and we could also divide them by four elements into Fire, Earth, Water and Air houses. Each of these groups presents with specific energy and nature.

The Second House is one of succedent houses that are ruled by fixed signs of Taurus, Scorpio, Leo and Aquarius.

Succedent houses are marked by their fixed and stable qualities, being satisfied with what resources one has at hand.

In this regard, the Second House is related to material possessions, to physical world and finances. This astrological field is also one of the Earth houses.

Earth houses are related to our needs and, once again, to the material world. These houses are focused on worldly experience and our relations with the physical realm.

Those whose earth houses are emphasized are people who are actively engaged with their earthly life, with materiality and resources that are available. They build, acquire, achieve things in the domain of the tangible world.

These houses are related to stability and practical needs that could be satisfied through concrete activities.

People with a strong emphasis on earth houses tend to be productive and to make a name for themselves; they feel as they have to play a role in the world.

The houses of the element earth are associated with achievement, ambition, vocation and purpose.

This house is focused on material gain; it deals with property possession and issues, inheritance and everything else that has to do with gaining money and achieving material stability in life.

This astrological house is greatly about possessions and possessing, but there is more to it.

The thing that is very interesting regarding the Second House is that this is also the field of talents, usually talents associated with having great vocal skills.

This means that a person with an emphasis in the Second House could be an amazing singer, spokesperson, lecturer, performer, television presenter etc.

Uranus is the planet of rebellion, revolution and individualism. This astrological planet could be a very unpredictable one, but it also infuses each aspect it forms with incredible energy.

The Second House, as we have said, rules the materiality, the material, physical aspect of life.

This House is associated with everything tangible in life, but also with talents and skills that help one gain material fortune and luxury.

One of the greatest themes of the Second House is the question of how much we deserve or, more precise, how much do we think we deserve. It, of course, has to do with our self-confidence.

Ruler of the Second House is planet Venus and it corresponds with the sign of Taurus. Taurus is an earth element sign and earth signs tell about how pragmatic we are.

In that sense, Uranus in Second House could significantly disrupt our material stability. Such a position of Uranus typically gives a personality ready to invest in risky business, someone who is interested in earning money in an unusual way.

People with Uranus in the Second House are not interested in conventional occupations and careers. They would never be satisfied with a nine to five office work.

They do not need a steady employment that grants regular income; they are adventurous and prone to risks and challenges. They are in search for employments that would allow them to express their individuality and their unique talents and skills.

They are not afraid of material instability; Second House Uranus people could not care less, honestly.

People with Uranus in the Second House are economically independent and their own bosses. No one could tell them what to do and how to do it.

They are used to unexpected and unplanned sources of income and they would extremely rarely think about money saving.

Uranus in the Second House makes the question of income unpredictable and ever changing. However, it always leaves you with an amazing potential and many open options.

Uranus in the Second House – A Gambler at Heart

Uranus in the Second House commonly indicates a personality that is eccentric and standing out of the masses.

These are people whose lives are full of unexpected turnovers and surprises, with which they cope brilliantly well. These people are prone to risky behaviors and risky investments.

We could say they were gamblers in their heart. They have an inexplicable need to spend money without thinking on how to gain it back; they believe in luck.

A gambler at heart; that is what is to be a Second House Uranus person. These people know how to get money very quickly, but they lose it as quickly as they got it in the first place. The outcome of this position would depend on aspects Uranus creates in a natal chart.

If it was in good aspects, this position in the Second House indicates a very resourceful and a clever personality.

These people are full of original, ingenious ideas that would always get them out of trouble. They know how to deal with strange and unpredictable situations in life: they act here and now.

With such a position of Uranus, an individual presents with remarkable organizational skills. They are capable of earning great amounts of money.

If it happens that Uranus was in bad aspects, then this position leads to financial problems and great material instability one cannot handle well.

People with such positioned Uranus and its aspects struggle with money and somehow they never have enough of it. It often happens they are incapable of keeping their jobs. They also struggle with debts.

When Uranus is in transit through the Second House, it brings unexpected opportunities either to gain a lot of money or to go bankrupt.

The previous seven years period, possibly marked by identity crises and questions regarding your attitude and relations with other people, has passed.

If you did not take a lesson from such a period, the following one would be even harder, because it carries a new behavior lesson to learn.

This new period, with Uranus in transit through the Second House, will be marked with your self-awakening regarding your potentials and abilities to make yourself a good material ground in life.

It could also make you realize you have talents and skills you have never thought of. This is a time of crisis, for good or for bad. It could inspire you greatly and move you towards finding efficient financial solutions or the other way around.

It is very likely that you have a good opportunity, but it could be a risk and you feel afraid to make a move. Now is the time to invest not an insignificant amount of money or to perform in a way you have never had.

Results will show was it worth and it is very likely that your risk would pay off. In any case, you will learn something and you will grow, gaining more life experience and with that, more self-confidence.

This is a period marked by certain level of anxiety and insecurity, because it undoubtedly leads to material instability. There would be drastic changes in one’s financial status.

It is advised to find some alternative sources of income and not to rely on your current job alone.

You have to risk, but try to keep common sense about making foolish decisions that could cost you more than you could afford to lose.

The influence of Uranus slowly touches the Third House, with this transit, which would lead to problems and conflicts with people around you.

However, if you have learned the lesson from the Second House Uranus and learned how to manage your financial matters, you could apply the same formula on your social and private relations and bring it all into balance.