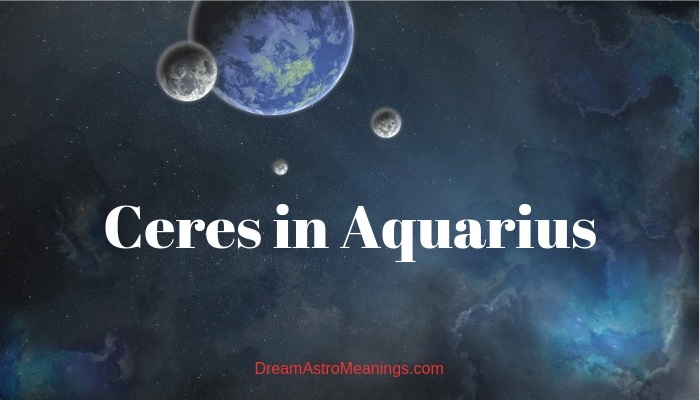 Who was Ceres? Ceres or Demeter was an ancient goddess of agriculture and crops, worshiped in classical Greece and Rome.

Demeter and Persephone, her daughter, were the major deities of Eleusinian mysteries cult, related to vegetation cycles, much worshiped in ancient times. According to historical sources, the cult of Ceres came into Rome from Sicily.

It was done so because of what Sibylline Books said and in order to save Rome from great draught and famine. Ceres, the goddess of crops and grains, was meant to be pleased in order to save the barren lands and lives of the people of Rome.

In her honor, people built a temple on the Aventine hill.

It was the first Greek temple in Rome, with service in Greek language. Even priestesses of the temple were Greek by their origins.

This beloved and worshipped goddess was only one agricultural deity to be placed amongst the twelve major Roman deities, equivalent to the Olympian pantheon. Ceres was truly a significant deity. Ceres was considered a mother of vegetation and she embodied the very archetypical image of the Supreme Mother.

She is one of the deities whose origins seize far into past, in the time of matriarchal dominance.

Ceres was also the goddess of fertility, motherhood, care and nurture. This is what interests us in astrological terms the most. The myth about Ceres and the unfortunate destiny of her daughter Proserpine is where astrological meaning of the asteroid comes from.

It is a well-known myth of abduction, loss, search and reunification.

Ceres and Proserpine, the mother and the daughter, were inseparable throughout Proserpine’s childhood and the mother adored her. The god of the Underworld, Pluto, was in love of Proserpine and he abducted her, taken her against her will.

Ceres was so desperate that no field gave any food to people and all living life suffered greatly. She searched for her daughter and eventually the deal was made, declared by Jupiter.

Proserpine, now Pluto’s wife, had to spend three months each year in his kingdom and the other months above ground, with her mother. They myth tells about motherly love, ascension through suffering, bonds, control, care and unconditional love, but also about the inevitability of separation and the acceptance of it.

The meaning of the asteroid Ceres in astrology is closely related to this myth of the goddess who has lost her daughter and cared deeply for her.

There are other important elements to consider, such as the idea of separation, control and possessiveness.

Asteroid Ceres carries archetypical meanings inherited from the deity, just as other astrological planets reflect other gods and goddesses’ qualities.

Ceres symbolizes care and one’s nurturing capacities. It shapes us up as caring beings. In one’s natal chart, Ceres describes the person as a caring being of certain nurturing qualities.

It means that people could be very different in terms of caring, guardianship, showing affection and love for dear people and for people in general. Ceres represents your needs, in terms of nurturing, as well.

This little planetoid as seen as an astrological element affects our sense of care.

Essentially, it represents pure motherly instinct; one’s need to nurture, feed and protect. The very nature of Ceres is nurturing.

Ceres in signs and houses determines one’s channels for manifesting their caring energy and also determines the field of life they feel as if they need to be nurtured by.

This is why some of us are satisfied with affection expressed through cuddling and touch, while others need intellectual nurture and others need it in a material form.

These differences are rarely strict, because our natal charts are complex and there are many elements affecting our nurturing nature.

If someone has Ceres in bad aspects, their nurturing nature, of whatever sort it might be, could become blocked and changed.

Ceres in Aquarius – Caring for uniqueness

Ceres in Aquarius people could never care about someone in a ‘traditional’ way.

It seems that people with Ceres in Aquarius mature before others, which commonly happens because they lack strong motherly figure in their youth.

They do not expect of others to care for them in a classical way, because they do not know what it looks like at all.

They are, however, suspicious about commitment and they do have problem with intimacy. It all comes from the possibility that they have been somehow neglected or abandoned as children.

They nurture others by supporting their individuality and uniqueness. They feel good if they are accepted by others, no matter how strange they are.

It is their way to show people they care for them. In addition, Ceres Aquarius often have a need to help the whole community, even the whole humankind.

Their nurturing nature is wide and transferred to a bigger plan. While they might have problems in intimate relations and letting people in, they would do everything in order to save all people.

They are great humanitarians and their caring nature manifests to support pacifistic causes and else.

Ceres Aquarius feel good if their actions can help big causes, all intended to benefit of the people.

People with Ceres in Aquarius often channel their nurturing energy through great causes, while they often find it difficult to both show and receive affection on an intimate plan.

It usually happens that these people have lacked strong parental, especially motherly figure, in early life.

It made them mature quickly, but their caring part of personality is, thus, not classical.

They need freedom, in order to feel comfortable. If you care for them, do not push them too hard into a relationship of any sort.

Let them be and accept their individuality.

These people have no prejudices and they see all people important and valuable.

They are the ones to support and promote uniqueness of every individual and, at the same time, make everyone feel as a part of something, as unique as they are. They would like to be accepted for who they are, not for what one might want them to be.