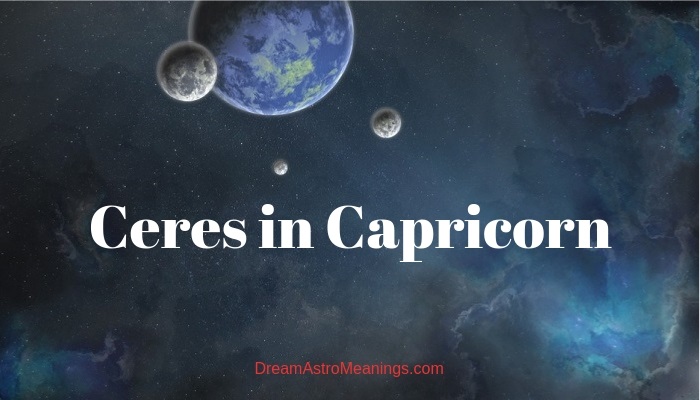 Demeter or Ceres was a greatly worshiped deity in classical Greek and Roman tradition. Ceres is actually the Roman equivalent of the Greek goddess Demeter.

The most famous myth about the goddess is that about the abduction of her daughter Persephone (Proserpine) by the god of the Underworld, Pluto (Hades).

The myth carries meanings and motifs that astrological Ceres embodies.

Ceres was an agricultural goddess, the goddess of fertility, crops, vegetation and growth. The origin of fertility deities is much older than classical period and all the deities related to the concept of fertility carry archetypical meanings.

Her cult is closely related to cycles of vegetation and worshiping the seasonal changes, the nature as it is. Ceres has given people grains to grow and to produce and, in that way, be well fed, healthy and vital. Demeter and Persephone (Ceres and Proserpine) are major deities of the Eleusinian cult, which is about vegetation cycles. It is perhaps the most famed ‘secret’ cult of classical tradition.

It is originally an ancient Greek cult, also worshiped after the Roman conquest. The story of Demeter and Persephone is the story of the loss of the daughter, the mother’s grief and love, in the first place.

Some suggest that the myth also explains the coming of the age of the dominance of men. According to the myth, Persephone was taken against her will to be Hades wife.

Hades took her into his dark kingdom and raped her. She did become his queen; the myth is also interpreted as gaining sovereignty through suffering. However, it is the motif of the mother’s grief over the loss of her daughter that reflects the most in the astrological influence of Ceres.

Enraged and sad, Ceres ceased her support of the vegetation on earth, refusing to take the food herself.

The story is also about the control and possessiveness, care and worry. Eventually, gods declared a solution and shared the ‘custody’ over Persephone between the mother and the husband.

Ceres was, in fact, grateful and she got back to her divine duties and blessed the world with fertile lands, crops and else. The story is about the inevitable loss and the acceptance of it, as well.

Astrological Ceres is the smallest of the dwarf planets and the largest of the asteroids, located between Mars and Jupiter. Asteroids are of delicate importance in analyzes of personal horoscopes.

They are not major determining factors, but they give special shades to each personality.

In astrological analyses, Ceres stands for principles of care and nurture, including both elf-care and the care for others.

Ceres in a natal chart tells about one’s nurturing capacities; one’s ability to show affection and care for other people. Ceres also represents our abilities to process and accept gentle feelings directed towards us.

Some people find it hard to accept other’s care and affection and it is very likely because their Ceres is in some bad aspects with other planets in the natal chart.

This tiny planetoid affects the way we care for people and inspire us to care. The position of Ceres in one’s natal chart determines the way that person is going to express their nurturing nature.

For example, someone is in need of warm, physical touch and they show affection through touch.

Others find the greatest comfort and satisfaction in learning things and they nurture others by teaching etc. There are many options.

Ceres is also associated with separation and the acceptance of loss, just as Demeter had to accept the fact that her own daughter is now someone else’s as well. Ceres has a great impact on development of one’s relation with parents and vice versa.

This is closely related to one’s self-esteem, self-respect, development of nurturing abilities and self-care.

Ceres in Capricorn makes one taking their nurturing and caring capacities a great responsibility, in the first place.

It is very likely that Ceres Capricorn parents would raise their kids by teaching them order and strict discipline, without showing the warmth of parental love, in the most common terms.

They nurture through teaching morals, order, ethics and organization.

They could be very cold and they rarely openly show their gentle side, which they have. They believe they do the best for their loved ones by being loyal, disciplined and organized. They would never break their word. They definitely lack emotional warmth and compassion.

Others may understand them wrongly and think they do not care at all, especially if they have far more emotional Ceres in their own horoscope.

Ceres Capricorns do neither expect nor demand to be pampered and indulged by kindness.

They want organization and they feel you care for them if you show them you can stay true to your principles, especially ones mutually shared. They prefer feeling that they are being respected, rather than cared for. They feel safe if they make plans and stick to those.

Do not try pleasantly to surprise them; it could shake them, instead of make them feel pleased and comfortable.

They would always encourage others organize their life and they would help them do so. They support hard work and effort and feel good if rewarded for their work.

Social status and achievement are also concepts from which Ceres Capricorn take energy.

For Ceres Capricorns, being nurtured is the same as being respected for their achievements.

Ceres in Capricorn is of cold headed, respectful, organizational nature.

This Ceres does not show care through emotional support and physical closeness and it does not require it in return.

In fact, Ceres Capricorns often feel uneasy if someone is about to try to comfort them by kind words and hugs.

They want to be respected, not pampered. They do the same for others and they could really inspire you make your plans, stick to them and achieve great things.

People could often misunderstand them as completely insensitive beings. It happens children of Ceres Capricorns even feel less loved, while the truth is completely the opposite.

They offer great encouragement in taking effort and sticking to goals.