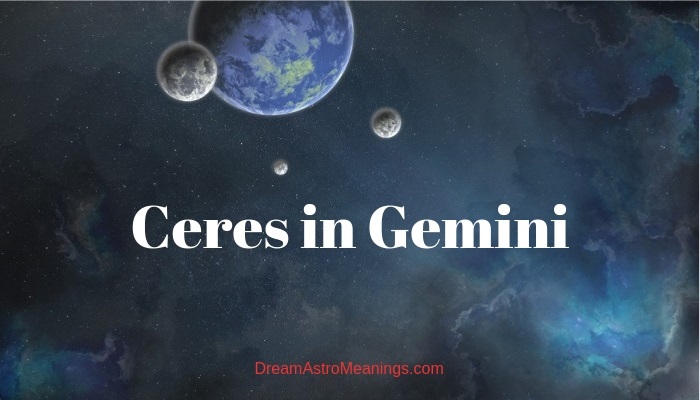 She is the Roman equivalent of the Greek Demeter and the only one of agricultural deities in Roman mythology to be a part of Dii Consentes (Roman version of the Olympic pantheon).

She represents bonds between a mother and a daughter and that between parent and a child. Mythical Ceres is ultimate figure of a mother. According to the mythical story of Ceres, she had a very dear daughter, Proserpine (in Greek, Persephone), whom the god of the underworld, Pluto (Hades) was desperately in love with.

Pluto took Proserpine against her will. Before she was taken by Hades, in Greek version, she was also known as Kore, or ‘the maiden’.

Devastated by sadness and grief and then by rage and anger, Ceres cared not about the world. Vegetation went dry, lands barren, people and animals starving. Ceres did found Proserpine, but she was already Pluto’s wife.

The story ends with a compromise solution, declared by gods of the Olympus. Part of the year Proserpine stays with her mother and the other part with her husband.

The story of Ceres and Proserpine illustrates strong maternal instincts, motherly care and unconditional love for children. It is also about control, possession and bonds.

For one part, the story also symbolically explains the change of seasons and all cycles of the living life. Ceres is a nurturing mother; not only the mother of Proserpine, but of all life, in a way.

Primary archetypical background of the Ceres myth is the connection between the mother and a daughter.

It is closely related to mothers’ possessiveness; her unwillingness to let go of the daughter. It is something all parents experience; leaving of their young ones.

The separation between a parent and a child is embodied in Ceres, which definitely makes it important as an astrological element. Ceres is associated with loss and with the suffering, related closely to whom we care for the most.

Ceres is an asteroid, the smallest planetoid identified in our Solar system. Its name and astrological importance are related to the goddess we have talked about.

As an astrological heavenly body, it carries the energy and archetypical meaning of the Roman goddess.

It is an important element to search out for when analyzing someone’s birth chart and personal horoscope.

In natal astrology, Ceres stands for nurture, care, attention, the desire to help others and nurture them. These are incorporated in each one’s personality, but our ways of expressing these ideas greatly differ.

The zodiac sign Ceres matches in a natal chart represents the way a person is going to express the desire to take care and the need to be cared for.

Astrological houses that Ceres occupy represent the main source of caring and nurturing instinct in someone’s life; a house represents the area of life one is most likely to show their need to care for someone and the one they expect to get attention and nurture from.

Ceres also represents relations between parents and children. It is closely related to ideas of dependence, self-reliance and self-respect.

Ceres describes the way we are going to take care about other people. It also represents our expectations from others, in terms of care.

Some people love to be talked to in a gentle, sweet manner, some prefer deeds of love to words, some are materialistic, so they see gifts as a proper way of care, others only want a warm hug and so on. It all has to do with Ceres.

This tiny asteroid actually plays a major role in someone’s birth chart and horoscope, because care and nurture are essential parts of us as human beings, who think and feel. This makes it generally a positive element.

However, it could happen negative aspects with some of astrological planets block its nurturing energy.

Ceres in Gemini – Nurturing through words

Ceres in Gemini indicates a playful, talkative and very sociable spirit. People with Ceres in Gemini find support and strength in communication, in constant exchange with people.

They are very open and friendly people and they know well with words. They would always support the talent for using words in others and help one express their deepest feelings through words.

Gemini Ceres would write letters, stories, long posts, songs or something else.

They would talk with everyone, everywhere. They like to travel and to meet new people.

It is their way of taking care for themselves and for others. It is likely they would engage with some multicultural type of job, where they could express their need to connect people.

Connecting people through communication is their way of helping the world become a better place.

On a personal plan, Ceres Gemini would always express their care openly, through words.

They would expect the same from others. They get confused by those who cannot speak up their feelings aloud. They are talkative and any sort of conversation energizes them.

Ceres Gemini sometimes take too much on their back, in order to show their affection.

They are constantly on the move and they like to please everyone. They have no problem with trying to resolve others problems and stand out for them, they would like others do the same in return, but they do not suffer much if it does not happen.

Gemini Ceres are wonderful, pleasant, interesting people to have around.

They would always try to cheer you up with some exciting stories of their experiences with people, stories from their travels and so on.

They are communicative and talkative, so this is the primary channel for their caring energy. They eagerly help others solve difficult situations. It seems nothing is too hard for them.

They would very much appreciate if you find time to talk to them or text them.

They are people who share; sharing experiences through a good talk is a very important thing for Ceres Gemini.

They enjoy learning things, so they are great listeners. They also enjoy being listened to. They are at risk of getting confused by so many information they receive and give.

Ultimately, they are good-hearted people, open and friendly to everyone.