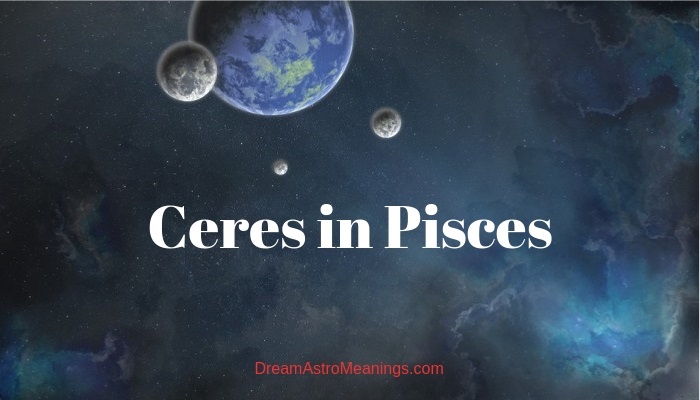 Ceres is a tiny planetoid, an asteroid between Jupiter and Mars. It was discovered on the first day of the New Year 1801. Giuseppe Piazzi, an Italian priest, mathematician and astronomer discovered the asteroid.

Ceres is unique for several characteristics, in both astronomical and astrological sense.

It is the only asteroid we know of that is large enough to have a strong gravity force of its own.

Thanks to its gravity, Ceres is shaped nearly as a sphere, just like planets are.  Its name comes from the Roman goddess Ceres, which is the equivalent to Greek Demeter. The goddess Ceres has a beloved daughter Proserpine and the myth of the two is what greatly influenced Ceres’ astrological meaning.

Astrologically, Ceres has a great role when it comes to care and nurture.

Ceres was a notable character in ancient mythologies, famed for her unconditional devotion and love for her daughter Proserpine. Ceres and Proserpine were inseparable and it has happened that Pluto, the god of the Underworld, fell in love with Proserpine and wanted her for himself.

He took the young goddess by force and made her his queen in his dark, gloomy kingdom.

Out of raging anger and grief, Ceres refused to perform her divine duties and she turned upside down the heaven and the earth in search of her daughter. Ceres was an agricultural deity, the goddess of all vegetation, food, crops, fertility and abundance. Once she stopped performing her divine powers, all lands went dry, abandoned and sad. They people, the animals and the plants went sick and dying.

Ceres was indeed a powerful deity, but her maternal instinct prevailed over her care for the earth. This myth tells about her great devotion and unconditional love that could develop only between a mother and a daughter, but also about her possessiveness and control.

The myth also tells about separation, loss and the acceptance of loss.

It is about the connection between the mother and a child, the life and death, the loss and the acceptance.

In astrological terms, Ceres is mostly seen as an element that represents the idea and concept of care and nurture. In an individual horoscope, it represents a person as a caring being, the one with deep inborn need to nurture something or someone and to be nurtured and taken care of.

Ceres always represents the principle of giving and receiving.

On an individual level, it represents our nurturing nature. It shapes up our sense of care and for care. Depending on Ceres’ position in a birth chart, you feel the desire to be cared for in a specific manner.

It also determines your major channel of expressing your caring nature and helping and nurturing others. Ceres has also to do with how you relate to your parents and/or your children.

However, aspects with other planets could affect Ceres nurturing nature and block your channels.

This is often seen in individuals who find it difficult to express their affection and who feel incapable of receiving the same; they often have Ceres in rather bad aspects.

The sign and the house your Ceres sits in the natal chart show the field of life filled with nurturing energy.

It is the area of life that you seek comfort and care in. The nature of the sign Ceres matches corresponds with the way you are going to express your caring self.

It also tells about your self-care and expectations of other people in the same terms.

Pisces are known as mysterious and deeply emotional sign, so Ceres in Pisces is very sensitive, gentle and full of empathy.

People with Ceres in Pisces find great joy in absorbing impressions from the world around and the people are always a part of these impressions.

They seek for deep connection on an emotional level. They do not need to be indulged with fancy things, expensive gifts, and food, nothing like that. They feel you and they need you emotionally.

People with Ceres in Pisces feel fulfilled if they can share their impressions with you.

Just sitting on the beach, silent, listening to the sounds of the sea and sharing that moment with a dear person would make them feel content.

They are full of understanding and tolerance and their nurturing nature is emotional. They will be there to comfort you and help you go through emotional crises.

They feel cared for if other people are there in their times of crisis. They need emotional support above all else. They need a connection that is deep and strong; shallow relationships make them sad. They are selfless and ready to give others the whole of themselves.

Imagination is what also makes them feel good; they drive great strength from it.

If you want A Ceres Pisces person to feel good and cared for, inspire their imagination, support and feed it, but be cautious and do not let them get lost in an imaginary world.

You could connect with them through many channels, because they have amazing intuition.

They do not need spoken words in order to feel connected and nurtured and vice versa.

People with Ceres in Pisces are kind, genuinely nurturing souls. Their caring nature is deeply emotional.

These people usually have strongly developed sense of care and need to love and be loved since early age.

It is of essential importance their parents teach them the difference between love and empathy. They are naturally empathic and compassionate ones.

Ceres Pisces find great comfort in imagination and in their intuition.

They can feel the people around and they are sensitive to others emotional crisis. They show care through support, especially through emotional support.

Their idea of caring is all about that and this is how they wish others show care for them. If it does not happen, they do not get angry, but sad.

Try not to hurt these gentle souls by reckless behavior related to their emotions.