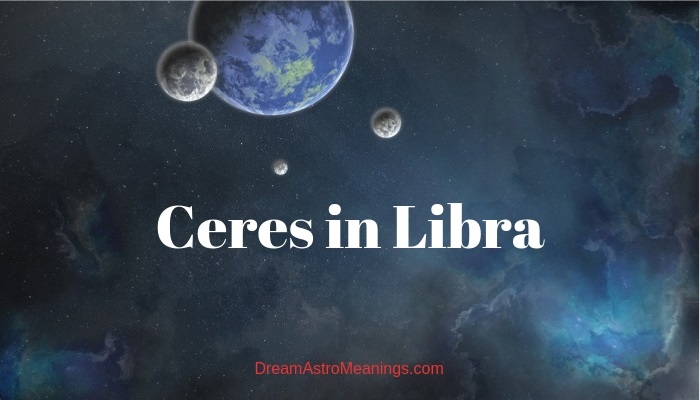 Ceres was an old Italic deity of harvest, agriculture and crops, the protector of plebs. She had a temple on Aventine hill. Ceres was worshiped through the festival of Cerealia.

This deity is identified with the Greek goddess Demeter and the two share the same legendary tale.

Many classical authors identify the name of Ceres with crops, grains, food and abundance in general. Ceres was the major Roman agricultural deity.

This ancient goddess was also associated with the idea of the Mother and with the Earth. Ceres or Demeter was the goddess of vegetation, fertility, abundance, prosperity. She embodies the very archetypical idea of the motherly figure.

The story of Ceres and Proserpine is well-known around the world and it greatly helps us understand the meaning of the Ceres asteroid in astrology.

The myth about Ceres is the story of a mother who would do everything in order to save her daughter. The myth illustrated unconditional love of a mother towards a child and her readiness to sacrifice many things, in order to reconnect with her child.

Mother’s possessiveness and devotion could be a powerful force, sometimes destructive and indeed scary.

As the story tells, the god of the Underworld, Pluto (Hades in Greek version) wanted Proserpine (Persephone) to become his wife and to rule by his side. He took her by force and broke the heart of the mother Ceres.

Ceres stopped caring for the world and showed none of her divine powers in nurturing the lands.

All vegetation stopped, people and animals got sick and dying.

Ceres desperately searched for her daughter and demanded her return.  Finally, Jupiter (Zeus) made the decision upon the matter. He decided that Proserpine spends several months with her husband and the other ones with her mother.

Astrological Ceres embodies the idea of a nurturing and possessive mother, who finds it hard to deal with the loss of her daughter, especially because the circumstances of their separation were so cruel.

It also affects the way parents go through the separation from their beloved young ones.

Although this aspect of Ceres is not that often emphasized in astrological analyses, it also has to do with sovereignty achieved through sacrifice or suffering.

Remember, although she never wanted it, Proserpine became a powerful underworld deity, the queen of the realm of death. Sometimes duties that make us great, in a way, come undesired and unexpected, but we would do the best to accept them.

In a natal chart, Ceres is closely related to one’s perception of care.

It is about how you care for other people and how would you like to be treated by others and shown affection.

Ceres also deals with the question of self-respect and attitudes towards authority, particularly related to parents-children relationship. Ceres in a natal chart ‘describes’ the way we deal with our ideas of self-importance and personal worthiness.

The position of Ceres in astrological houses tells about the field of life, which is overwhelmed by the energy of care and nurture.

At the same time, it is the area of life we expect to offer us the nurturing energy.

For example, if someone has Ceres in the fourth house, related to home and family, it is the place he or she would invest the most of their nurturing energy. It would also shape up the way this person expresses care for others.

Ceres in Libra – Beauty and justice

Ceres in Libra expresses and receives nurturing energy through beauty. It is known that the sign of Libra is marked by the great sense of aesthetics and the taste for subtle beautiful things.

Actually, they are capable of recognizing the most subtle signs of affection others would easily miss out.

They also see to show affection subtly and through special small signs and gestures.

Ceres Libras make others see beauty in the world around and this is, perhaps, one of the best ways to show them you care about their well-being.

Libra Ceres wants you to realize there are many beautiful things in the world and within yourself you are might missing out.

They do not demand the same in return, but feel very pleased and cared for if you do the same.

These individuals are caring in relaxed, friendly way. They enjoy sharing. They are openhearted, hospitable and kind towards people. Rarely one feels neglected or overlooked by a Ceres Libra.

Cares Libra care for justice very much and would show their affection by defending the rights of the helpless.

Sometimes they get lost in need of being accepted but generally, it is not an issue with Ceres Libra. It could happen if they get obsessed by seeking out the justice for others, so they neglect themselves.

However, they easily get back into balance, because it is in their nature.

Overall, these are fine, kind people who feel happy if they have helped someone.

They generally do not demand praise for their deeds. Sharing and caring is the way they are. They would be pleased if someone invites them for a fancy dinner, an haute couture fashion show, an exhibition or else, but they are not obsessed with it.

A sincere word and a warm hug would usually suffice.

Ceres Libra people are capable of finding balance between taking care about themselves and nurturing their inner being with beauty they see in the world around and taking care for other people.

They are honest, openhearted, very friendly and sociable. They show they care for others by sharing. They would easily cheer you up by pointing out how many beautiful things are there you fail to see.

Libra Ceres ones help others see beauty inside their own soul and they could be the most encouraging people to have around in these terms.

They are benevolent, justice defenders. Libra Ceres always stand out for those whom some injustice has been done. They often see themselves as mediators and diplomats.

Their care is manifesting, visible in many small gestures and things they say.