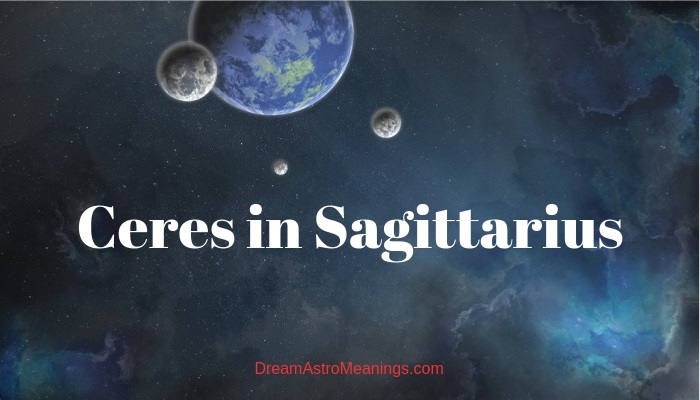 The Mother goddess, Ceres, was an ancient agricultural deity of Ancient Rome. It is a Roman equivalent of the Greek Demeter and the beliefs and myths of the two are shared and the same.

The myth about Demeter and Persephone (or of Ceres and Proserpine, in Roman version) explains the meaning of the astrological planetoid Ceres in natal charts and individual horoscopes.

First, Ceres is the only agricultural deity amongst the twelve major Roman deities, Dii Consentens.

This illustrates how important Ceres was to people. Demeter, the Greek equivalent, is the major goddess of Eleusinian mysteries, the cult dedicated to seasonal changes and vegetation.

Along with her daughter Persephone, Demeter was worshipped through this ‘secret’ cult, probably the most famed one.

Ceres represents vegetation, nature, fertility and abundance. Her daughter and Ceres were the ones to give people grain crops, so that their lands become fertile and rich in food.

This happened after the dreadful experience for the mother Ceres, which is the most popular myth related to this deity. Ceres represents the principle of mother; this motif is particularly strong in the myth.

The legend tells about the loss of the daughter, in the first place. Pluto, Hades in Greek mythology, was in love with Proserpine, the daughter of Ceres, but she did not love him back.

As it goes in classical mythology, he simply decided to abduct her and take her against her will.

Desperate mother Ceres searched the heaven and the earth in order to take back her much loved daughter.

Ceres’ rage was so great that all land gone dry and barren; the lands suffered her grief, as she was the goddess of vegetation, fertility and abundance.

Finally, the compromising solution was made between Ceres and Pluto. Proserpine would spend a part of the year with her husband and another part with her mother. These stages of Proserpine’s life are cyclic and they resemble seasonal changes.

In astrology, Ceres carries meanings of the goddess Ceres. Astrological planets and heavenly bodies all embody archetypical meanings of ancient deities they were named after.

Ceres is an asteroid, the largest one in the asteroid belt and the smallest planetoid. More than two centuries ago an Italian astronomer discovered Ceres.

Later on, it was  enlisted amongst astrological asteroids.

In astrology, Ceres plays an important role. In analyzing birth charts, astrologers carefully examine the position of Ceres. It is because this planetoid represents the principle of care and nurture, the motherly type of love and possessiveness.

In a natal chart, it represents our sense of self-importance, related to our attitude towards parental figures.

Ceres represents the way we care about people and the way they care about us. At least, what we deeply wish them to do.

It is about or self-care, the sources we receive nurture from and those we expect to offer us comfort and care, as well as about our own perception of the very concept of caring.

There are people who show their affection through kind words and through touch, there are others who show it through gifts, education, honest advices.

There are people who feel nurtured if you please them with material things and there are those who only want a gentle kiss.

Each one of us has its own idea about how caring for someone should look like. It depends on the position of Ceres in your natal chart.

The sign and the astrological field it occupies tells us about the nature of caring and being cared of.

Let us find out what are people with Ceres in Sagittarius like; what is their concept of care?

Ceres in Sagittarius nurtures through education and adventure. The sign of Sagittarius is known to be an adventurous philosopher.

People who have Ceres in Sagittarius are of positive attitude, open for learning and new experiences.

They are not hot headed, but curious and intrigued by many things. They enjoy traveling and sharing their experiences.

They would care for others by sharing with them precious knowledge, by educating people and helping them see deeper and further.

Sagittarius Ceres feel at their best if you offer them new ideas, if you would like to engage in a philosophical debate with them. They enjoy exploring new ideas.

Take them for a short trip, talk with them about education, philosophy, science.

They do not show typical nurturing qualities, meaning there is no sweet talk, warm touch or else with them.

It is not their way. They encourage others and support optimistic thinking. They are not by your side to comfort you and say that things will get better. No. They would offer you some intellectual point of the situation and a good advice.

They do not fall for sweet words of love and affection, hugs and kisses, but some rather smart talk.

Ceres Sagittarius value their freedom above everything else, because they have strong need to widen their perspective of life, in both physical (through traveling) and mental (through learning) way.

Do not try to cut their wings, but let them run free. It is the best way to show them you care for them.

They do the same for others. They encourage learning; they support others on their journey of self-liberation.

They do not care for others in typical way nor do they except others offer them the same thing. They value freedom, intellectual development and experience. They feel cared for if you let them go, not if you try to bind them.

Let them explore new horizons and they will feel as if you respect their desires and actually care for them. Nurture their adventurous and intellectual spirit.

People with Ceres in Sagittarius perhaps understand the best one’s need for freedom.

They would always encourage brave enterprises and enjoy listening to other’s experiences of life. They do not show much emotional and pampering care, but practical, educational, encouraging in a specific way.

Ceres Sagittarius feel as if it is their task to nurture and feed all humankind with knowledge.