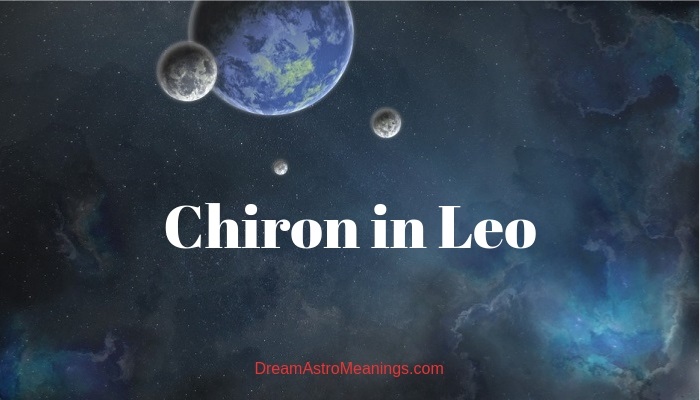 Chiron is a small icy body orbiting the Sun. First it was believed to be an asteroid, but it was later discovered that it also displayed traits of a comet and because of that was categorized as a centaur (after the creature from Greek mythology which was half man half horse).

This astronomical body is also a hybrid because it has traits of a comet as well as an asteroid. It is estimated that more than 44,000 centaurs exist in our Solar system.

Chiron was first discovered in 1977 by the astronomer Charles Kowal who classified it as an asteroid number 2060. This body is 200km wide and has an unstable orbit.

In Greek mythology, Chiron was the greatest of all the centaurs, and considered the wisest and the most righteous of all. He was considered to have a nurturing nature. Chiron shared some of the skills of his foster father Apollo.

Chiron wasn’t like other centaurs, which were lustful, wild, drunk, violent, and rude. Chiron was intelligent, kind, and civilized. His physical appearance also differs from the other centaurs. In ancient Greek presentations he was presented with human front legs, not horse legs, like other centaurs whose lower body is of a horse.

He is usually depicted wearing clothes unlike other centaurs, which accentuates his civilized and different nature than the nature of other centaurs.

According to the ancient myths Chiron was conceived by the nymph Philyra and the Titan Cronus. His mother abandoned him because she was ashamed and disgusted by the way he looked. He became an orphan who was later adopted by the god Apollo who took care of him.

Apollo thought him the art of music, herbs, medicine, healing, archery and hunting, gymnastics, as well as the art of prophecy. The discovery of the sciences of medicines and herbs (pharmacy and botany) is often accredited to Chiron. Apollo’s sister, Artemis, the goddess of hunt, wilderness, myth, religion, wild animals, the Moon, and chastity, taught Chiron the art of archery and hunting. They both formed Chiron’s character.

Chiron was a healer, an astrologer, an oracle, and was tutoring and teaching others. Some of his students were famous heroes in ancient Greek mythology.

His life ended in a strange set of circumstances. He was actually killed by a stray poisoned arrow thrown by the hero Heracles in an attempt to kill some other centaur. It is a long story, but in the end, Chiron who healed others, couldn’t heal himself.

That is why, in astrology, Chiron is sometimes referred to as the “wounded healer” and its placement in the natal chart points out a very vulnerable area of our lives; it is usually a wound which is inherited from our previous lifetimes and is a lesson we have brought with us in this incarnation so we can learn it and make no similar mistakes.

Chiron’s aspects with other planets, as well as the progressions and transits to this point can describe in more details the nature of the wound and the potential for its healing.

Chiron travels through all the signs of the Zodiac around 49 years, and its traits in a sign will be shared among the generations of people born during its transit through that sign. Its true influence on a person can be determined through a combined interpretation of its sign, the aspects it makes with other planets, and its house placement.

Chiron’s influence describes the area where we are feeling wounded, but also have the knowledge and the power to heal. First, we must confront this wound and the feelings being inadequate and not worth enough, and through exposing ourselves to the feelings and situations which are hurting us, we learn how to overcome them and rise above.

These wounds are usually deep-seated and painful, and it takes a lot of courage and determination to get over them. Once the person manages to do that, he becomes free of the heaviness and the burden he has been carrying along.

The symbolism of the sign and the house where Chiron is placed describes the areas where the wounds are and the lessons are to be learned. It might happen that we know exactly what others need to do when these areas are concerned, but when it comes to our lives we seem to have difficulty finding the right way out.

You have probably felt inadequate and unsuccessful in these areas all your life, but when you learn to overcome the inadequacy you will become the true master of your life and become stronger than you ever were.

Chiron is asking us to have the honesty and admit to ourselves that we have problems and insecurities regarding these areas, overcome the shame and our ego and begin taking actions to overcome these insecurities and heal. It can be very difficult for this person to decide that and actually pull it through, but it is worth the effort.

One of the effects that Chiron has on our behavior is making us overcompensate in the areas where we feel its influence; we could be feeling not good enough or incompetent or that we will never be able to be good enough; these are some of the emotional states which Chiron could provoke in us.

It is important to note the areas where we tend to feel like this because they will point out the issues we have and the potential solutions. One of the worst responses to these feelings is to ignore them.

Nothing will be resolved and we will waste our lives lacking the satisfaction in these areas which could be the most important areas for us.

It is important to overcome the shame and our ego and begin confronting these issues as soon as possible. True happiness and satisfaction are only possible when we are completely healed.

Men with Chiron in Leo often appear arrogant and demand to be in the center of attention even when their public doesn’t find them particularly interesting.

These men often have issues with their self-esteem and faith in their abilities although they do all they can to present themselves in a completely opposite light.

These men can be very insecure and hide this insecurity behind an enormous ego. They need to confront their weaknesses and embrace them as a part of their personality.

Only then, they can feel relaxed to express their true self.

Women with Chiron in Leo, just like men with this placement, often suffer from self-doubts and lack of confidence although they appear completely different in public.

They love to perform and that is a part of their personalities, but they usually don’t have enough talent for that.

Deep down, these women are aware of that fact, but they continue with their creative attempts and endeavors which don’t have an adequate response with their public.

That lack of response or indifference to their creative efforts causes these women to push harder to convince others in their qualities, which only makes matters worse.

Chiron in Leo people have an ability to help other people overcome their issues regarding their own creative expression and self-confidence and encourage them to express their talents and abilities freely and openly.

Chiron in Leo people often have issues with expressing their creativity and talents.

They are subconsciously aware of their inadequacy and their lacks in these areas, but their ego often pushes them to exaggerate in expressing them, although they are aware that they most likely appear funny and unfit for that role.

Chiron in Leo often indicates a wound related to a person’s ability to creatively express and ego issues related to that expression.

Inside, these people usually feel that they don’t have the imagination and the talent they try to convince others of having, and they don’t feel special or talented at all. The sense of inadequacy often has roots in their childhood when their creativity and expressiveness were suppressed by their parents or some authority figures.

These people might be very sensitive to the way others are reacting to their actions, especially reactions to your creative expressions. They often project their feelings of insecurity onto these situations, and attribute them meanings which don’t actually exist.

For example, if someone doesn’t understand their joke, or isn’t excited about their new creative work, they might get upset, hurt and disappointed, which only adds to their overall feeling of insecurity.

Because of their own internal projections and insecurities, these people could have strong and inadequate reactions to other people’s disapproval of their work. They could be prone to making a big deal out of innocent situations.

Underneath these feelings might lay a feeling of worthlessness and fear of rejection because they are not good enough. The way to deal with this kind of wound is acceptance of oneself as you truly are, with the flaws and imperfections, and yes, with the lack of talent to creatively express.

These people should try to enjoy their uniqueness and make the most of it not caring what others might say or if they will approve or disapprove their actions. They can also help other people, by helping them embrace their qualities and their flaws, and express them publically.

Be open to expressing your personality without worrying about anything and anyone. That way you will be more appreciated and accepted by others, even if your talents and abilities are not as excellent as you want them to be.

These people could also have issues with the feelings of self-worth usually related to the amount of money they possess and how successful they are in general. With this Chiron placement they could be feeling not worth enough even when their earnings are quite satisfying according to the average standard.

They could also experience situations where they have the need to prove their worth to others through their possessions and the amount of money they have, as if that is the only measure of their worth.

They could also have issues with the constant need for attention from other people and the need for their appreciation and recognition of their value. They could become egotistic and selfish in their quest for attention.

These people often possess a strong need for being validated and approved by other people, as well as being in the center of their attention.

They often have issues with their romantic life as if they carry along the past relationship hurts and they can’t find satisfaction in their relationships.

Chiron is not a planet, nor is a comet or asteroid. It is a combination of traits of a comet and an asteroid. In astrology it points out to parts of our life which need confronting and healing.

Its transit through signs of the Zodiac influence generations of people born during these transits.

To determine Chiron’s influence on a person’s life and its lessons, the most important is its sign and natal chart house placement, as well as the aspects it is making with the planets of the chart.

When Chiron is in the sign of Leo, it brings lessons from areas ruled by this sign. These people often feel inadequate in these areas and feel that something is missing, they aren’t successful in these areas, or they experience difficulties in achieving success in these areas.

In this case, the issues are usually related to the person’s self-esteem, ego, creative self-expression and accepting their own value. It also could be expressed as low self-worth and need to prove themselves through possessions and financial gains.

To heal these issues, the person with this Chiron placement needs to become aware of them and then begin working on healing them and becoming free.