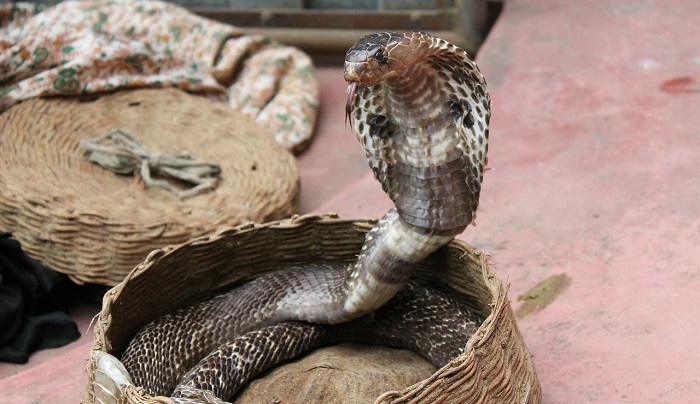 Cobras are deadly venomous snakes, known for their ability to stand upright and expanding their neck ribs to form a hood on their heads, which happens usually when they feel threatened. These snakes live in Africa and south and southeastern Asia.

Snake charmers use these snakes’ ability to stand upright in their performances for the public which gathers around them.

The charmer usually frightens the snake, so it takes the upright pose. Snake charming is a practice common in many Asian and African countries.

The charmer hypnotizes the snake by playing an instrument and waving around with it, while the snake moves sideways following these movements. They are practiced to avoid a potential deadly bite and many remove the snake’s fangs for protection.

The cobra’s venom is located in a groove enclosed in the short fangs at the front of their mouths. The venom contains neurotoxins, which destroy the nervous system and if an antivenin is not administered soon, death is inevitable.

Some cobras are venom spiting and some are not. Also, the toxicity of their venom varies.

The King cobra is the largest existing venomous snake in the world. King cobras live mostly in the forest regions of India and throughout Southeast Asia. These snakes prey mostly on other snakes.

The longest confirmed length of a King cobra was 5.6 meters. They are usually around 3.6 meters long. King cobras lay up to 40 eggs and guard their eggs against predators.

The Indian cobra is a smaller version of a cobra snake, and is up to 1.75 meters in length.

African cobras are not relatives to the Asian ones. Some are venom spitting and some aren’t. They direct the venom at the eyes of the victim. If the venom enters the eye and is not quickly and properly washed it sometimes causes permanent blindness.

The Egyptian cobra is spread around Africa and towards Arabia. Its prey is birds and toads.

What does a Cobra Symbolize? 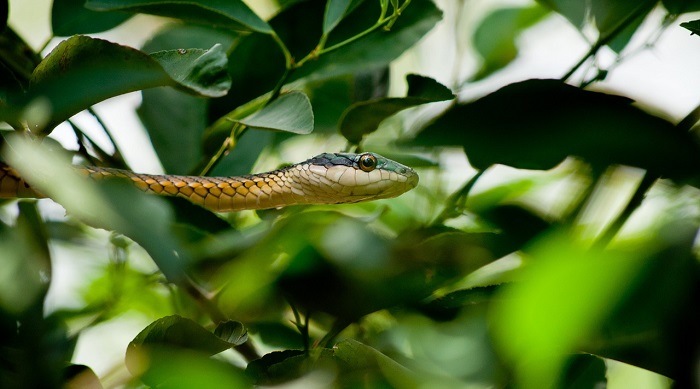 Cobras in Ancient Egypt were considered protectors of the Pharaoh.

The Cobra Meaning as a Spirit Animal

The cobra totem can have many different meanings. Here are some of them:

Speed. Cobras are known for their speed movements. They strike at the right moment. This cobra totem animal is giving you the ability to react quickly. You need to be alert and take action in the right moment. If a cobra is your totem animal you most likely think and react fast so you don’t miss an opportunity.

The cobra spirit animal is teaching you to be defensive and defend yourself and what’s yours using all your abilities.

With the cobra as your totem, you are most likely defensive and know how to take care of yourself and the ones you care about.

Protectiveness. Cobras are protective of their eggs and their young. The cobra spirit animal is teaching you to be there for the ones you care about and try to do all you can to protect them from harm.

Cobra as Your Totem Animal

If a cobra is your totem animal you most likely possess natural gracefulness. You are proud and confident and not afraid to stand up for your beliefs.

You are also courageous and don’t hesitate to attack anyone who might jeopardize you or your territory. With this animal as your totem you are defensive and protective.

You are truthful, but sometimes your expression and honesty can have a venomous tone.

You should work on having a milder approach towards people when you want to tell them something because you might unintentionally hurt someone who doesn’t have an understanding for such an approach.

What if the Cobra Appears in Your Life?

The cobra comes in your life to remind you that is time to take some action. it could also be calling you to rely on your wisdom and inner knowing to make some important decisions and choices.

The cobra could also appear when you need to discover or begin to use some hidden abilities you have.

This totem also appears in your life to boost your confidence, courage and self – esteem.

When to call on Cobra?

You should call on cobra as your spirit animal when:

Dreams about Cobra – Interpretation and Meaning

If you dreamed of a cobra, that dream could mean that you sexual desire for someone is increasing. This dream could also indicate a boost of creativity.

If you saw two cobras copulating in a dream, that dream is a very good sign. It is usually a sign of good fortune awaiting you.