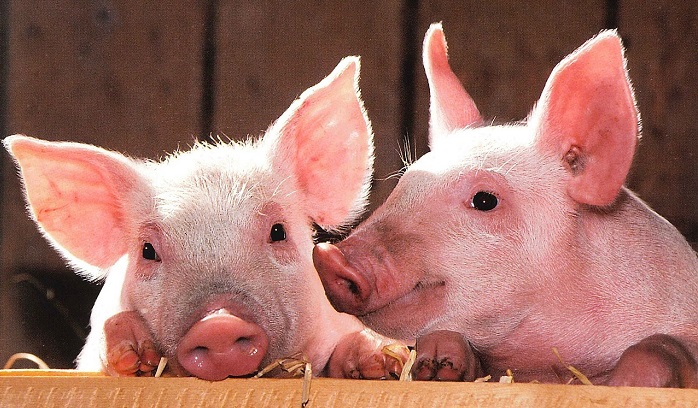 Pigs are animals from the genus Sus. Related to pigs are the babirusa, the warthog and the peccary.

Pigs are known for their intelligence and their social behavior. Young pigs are called piglets.

The domestic pig represents one of the most widely spread large mammals in the world.

These animals are adaptable and eat almost everything. They even share many similarities with humans.

Pigs have large heads with long snouts. They use their snouts to dig soil when they search for food. The snout is very sensitive. They have hoofed toes on their feet.

Mothers kept in captivity often kill their piglets, usually due to being stressed over something.

It is estimated that at any moment one billion domestic pigs exist in the world.

Their ancestors are the wild boars.

Wild pigs are very resourceful and can manage to survive in different habitats, providing they have enough water. They drink a lot of water per day. Pigs are omnivorous animals and include plants and animals in their diet.

Pigs have a high reproduction rate. 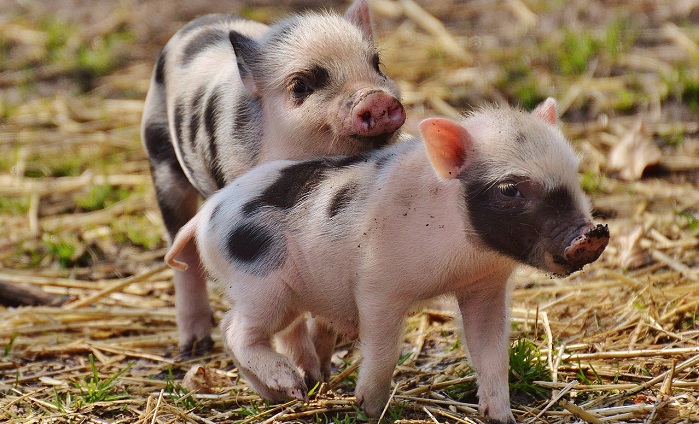 The miniature breeds of pigs are kept as house pets. Domesticated pigs are breed as livestock, to be used as food and other products, such as leather, brushes, etc. some pigs are used to search for truffles because of their excellent sense of smell.

The domestication of pigs had begun in ancient times. In North America pigs were brought from Europe by the early Spanish explorers.

It is considered that the domestic pig was domesticated approximately 5.000 to 7.000 years ago.

The length of their body reaches 1.8m and they can weigh up to 350kg.

The domestic pigs have similar genomes to humans. The research done on the pig’s genome can help studies of human genetic diseases and their treatment.

Cases of deliberate or accidental releasing of pigs into environments where they don’t exist caused big changes to the environment, mostly due to their aggressive behavior, ability to eat various foods, as well as their tendency of rooting the ground.

Pigs are also a threat to birds nesting on the ground and they sometimes eat small animals.

Feral pigs are considered one of the 100 worst invasive species in the world.

They play a major role in the change and destruction of the ecosystem. They damage crops, uproot large areas of land, spread weeds and disease, which all cause the decrease of the native fauna.

What does a Pig Symbolize?

Because pigs are a part of our lives for so long, there are many beliefs and symbolism related to these animals.

For example, in Germany, they are considered an omen of good fortune. Chinese have a pig as one of their 12 zodiac signs.

One of the sailors’ superstitions is that pigs are unlucky because their hooves resemble the ones of the Devil, and they are afraid of water as well. Because of that superstition it is not allowed to carry pigs on boats.

Fisherman also considered them a bad omen, and would go home if they saw a pig on their way fishing.

In ancient Egypt, the god Set was associated with pigs. They weren’t considered worthy sacrifices to most of their gods. In ancient Greece, pigs were commonly sacrificed to the goddesses Demeter and Aphrodite. Romans also sacrificed pigs to their gods.

For the Muslims, eating pork meat is forbidden by their religion. Judaism also considers the pig as an unclean animal to be consumed.

Pig Meaning as a Spirit Animal

The pig totem has many different meanings. Here are some of them:

Abundance. Pigs are a symbol of abundance. They reproduce very quickly and are one of the most spread mammals on the earth. This totem animal brings abundance into your life as well, in all desired areas. The pig totem teaches you to acknowledge your right to abundance and having plenty of everything you need and desire.

Wealth. Pigs are considered a symbol of wealth. If you have a pig as your spirit animal you are most likely on the path of becoming wealthy or you are wealthy already.

Gratitude. The pig totem is a reminder to be grateful for all your blessings and the people in your life who make it rich and fulfilled. Demonstrate your gratitude openly.

Generosity. The pig totem animal gives you the gift of generosity and selflessly helping other in any way you can. With the pig as your spirit animal, you are probably a very generous person and enjoy giving others your time and money.

Fertility. Pigs reproduce very quickly, and are considered fertile animals. This totem animal gives you this gift as well. You probably have many children or you are able to conceive easily. Sometimes with this animal as your totem, the situation is the opposite and you have difficulties with staying pregnant.

Bad parenting. Mother pigs are not considered the best of mothers. They often intentionally or unintentionally kill their young. The pig spirit animal is teaching you of the need to be a good parent and take good care of your children instead of neglecting them.

Having a pig as your totem animal you might be a person who doesn’t take your parenting role seriously, and this totem reminds you to change that attitude for the sake of your children and your relationship with them.

Overeating and overindulgence. Pigs are known for their strong appetite. They are omnivorous animals, which means they are not very choosy about their diet. If the pig is your totem, you possibly share this trait with your totem. You enjoy food and sometimes overindulge in eating.

This totem animal is asking you to try becoming more moderate when it comes to eating because it is not good for your health and your weight as well.

The pig totem is a reminder to consider changing your diet and begin eating healthier. You could also be a person who is prone to overindulging in other things, not just food.

This totem animal is an encouragement to get rid of trait because it is not serving you.

Pig as Your Totem Animal

If you have a pig as your totem animal, you are most likely a person who is situated and financially secured. People often think of you as very lucky. It seems that all your desires come to fruition. You only need to ask.

Opportunities seem to find their way easily towards you.

You are very intelligent and people often admire you for your wit. You are also a kind and generous person, always ready to help others. You are also appreciative and grateful and know how to demonstrate that.

With the pig as your spirit animal, you are also confident and determined to succeed. You strive towards progress and advancement in all areas of your life.

What if a Pig Appears in Your Life?

When the pig appears in your life, consider yourself fortunate because abundance awaits you soon. The pig symbolizes good luck as well so expect good luck following you in all areas of your life.

The pig appearing in your life could be a sign of becoming pregnant soon or hearing of someone close being pregnant.

Pig’s appearance in your life could also be a sign of advancement and progress, in your private or professional life.

This totem animal often symbolizes some new opportunities to succeed in your endeavors coming your way.

It often announces the change of circumstances in your life for the better. When the pig totem appears there is no need to be worried about the future. Expect abundance, pouring from everywhere.

When to call on Pig?

You should call on a pig as your spirit animal when:

Dreams about Pig – Interpretation and Meaning

When the pig appears in your dreams it could be a reminder from your subconscious to stop overindulging in something.

Learn to control your urges and reactions.

If you dreamed of piglets, that dream could indicate soon receiving news of a pregnancy, yours or someone’s.