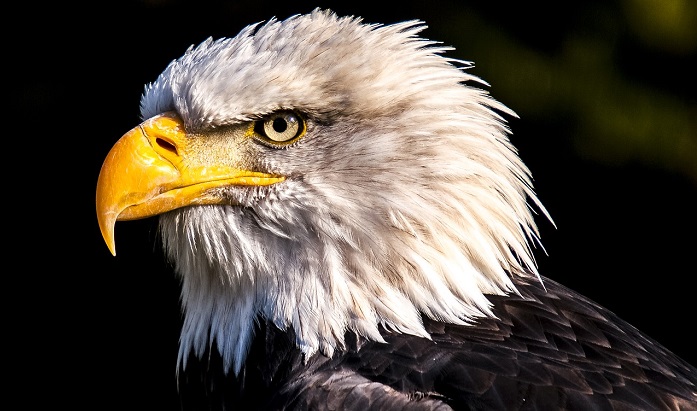 Eagles are large birds of prey. They usually come from Eurasia and Africa and some species are found in South, Central, North America and Australia. There are more than sixty species of these birds in the world.

These birds are powerful, with dangerous beaks and heavy heads. They also have long wings and they can fly very fast. They are larger than most raptor birds.

Their beaks are large and hooked, which enables them to rip the flesh from their prey. They also have strong, muscular legs.

Eagles also have a superb vision, several times better than humans. Their eyes stand on the sides of their head, which enables them to have a wide view field. This trait enables the eagle to spot its prey from a great distance.

Female eagles are larger than males. Eagles are monogamous and they usually mate for life. The couples use the same nest for years. Both male and the female participate in building of the nest.

These birds usually build their nests in tall trees or high cliffs. They usually lay two eggs, but it often happens that the larger chick kills its sibling after it is hatched. The dominant chicks are usually females, being bigger than the males. Their eagle parents do nothing to prevent these killing acts.

They usually don’t migrate and they can spend their entire lives in one territory. They do move if there isn’t enough food or the temperature is too low, and in such occasions they can cross 400 to 500 miles in one day.

They are apex predators and excellent hunters. Their hunting techniques are different with different eagle species and some use more than one technique, depending on the circumstances and they prey they are hunting. They often grab their prey while still flying and they don’t even land to catch it.

Some species of eagles are able to carry prey heavier than themselves. Eagles prefer eating the prey on the site, or carrying it in smaller pieces to their nests.

Unlike other birds of prey, eagles don’t turn their head to see if they are being under threat by some other bird while they prepare to make their kill. They are confident that no other bird would dare attack them.

Only the condors and some vultures are larger than eagles. The eagles which live in open country habitats have a very large wing span and they are excellent at soaring. Eagles are beautiful and graceful birds. 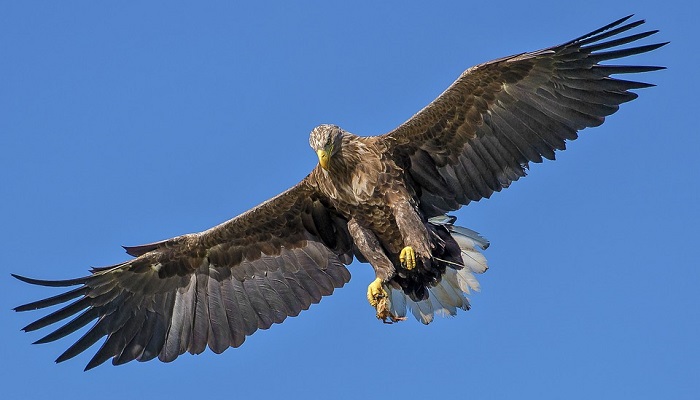 What does Eagle Symbolize?

The eagle has great importance for many cultures throughout the world and has had a vital symbolism since ancient times. The eagle was used as a symbol of royal strength and power for many emperors in history, dating back to ancient Babylon, Egypt, Rome. For Christians the eagle is the symbol of salvation, hope and strength.

This bird of prey symbolizes many things.

The Eagle Meaning as a Spirit Animal

The eagle totem can have many different meanings. Here are some of them:

Courage. Eagles are fearless birds. They are the only bird of prey, which don’t look behind their backs while preparing to make their kill to see if someone is behind getting ready to attack them. This totem animal is giving you this gift also. It teaches you to be courageous in all situations, and that your bravery will pay off and earn you your deserved respect.

Keen sight. Eagles are animals with one of the best sight among all living creatures. It is eight times better than the human vision. They are able to shift focus and zoom in on their prey. This trait is a necessary one to help them spot their prey from a big distance so they could successfully perform their attack.

With an eagle as your spirit animal, you most likely have a perfect eye sight. Besides that, you also possess the right skills to recognize the right opportunities and seize them.

Healing. Eagles usually prey on the weak and the sick, and in that way they prevent spreading of diseases. Because of that they are considered a symbol of healing and healing powers. The eagle spirit animal helps you discover or awaken these powers and abilities within you.

You might also be aware of these abilities and actively using them.

Sexual power. The eagles have powerful sky mating rituals. The eagle totem endows you with powerful sexual energy and power. With an eagle as your totem, you are probably a very sexual being and you openly express your sexuality. This totem animal appearing in your life could be a calling to become open to some new and exciting sexual experiences.

Grace. Eagles appear so graceful while soaring across the skies. This spirit animal is giving you the gift of grace. You are probably a very graceful person admired by other people.

Bigger picture. Eagles reach very high altitudes flying. They have a clear picture of the things going on below them. This totem teaches you of the importance of having a clear view of all the facts and not just bits. It is asking you to view all situations from all angles before you act or make some decision.

Swift action. Eagles are birds of action. They see their prey and they immediately take action to pursue it. This totem animal is teaching you of the importance of acting swiftly and with determination because if you don’t act that way, you might miss some important opportunities which won’t come back.

Eagle as Your Totem Animal

If an eagle is your totem animal you are most likely a very confident and grounded person.

You are also very spiritual and seek spiritual evolvement. You seek to gain knowledge of the unseen. You are brave and courageous and you are not afraid to confront life’s challenges and obstacles.

You are determined to succeed and you don’t mind putting in extra effort to achieve your goals.

With an eagle as your spirit animal, you are probably a person eager for adventure and new and exciting experiences.

You are very successful and you aim high when it comes to your goals and aspirations. With an eagle as your totem, you usually manage to accomplish all of them without much effort.

Although you are an adventurer by nature, you also have good leader abilities and you are good at managing others. You could also be a great teacher, transferring your knowledge and wisdom with ease to the ones who desire to acquire it.

You also have a strong willpower and you use it to accomplish what you desire in life. You could also be very influential and others simply follow your lead.

You need to be aware that your power is a force not to be played with and you need to remain as balanced as you possibly can.

What if Eagle Appear in Your Life?

Eagles are considered powerful spirit animals. Their appearance in our lives is asking us to pay attention to your inner guidance and the impulses you receive from your inner being, especially regarding some action you need to take.

This spirit animal appears to announce new opportunities coming into your life, you only need to let your heart guide you and don’t be afraid.

The eagle appearing in your life could be a calling to demonstrate your determination and courage in some situation. The eagle is a reminder to never settle with circumstances you don’t like. It also reminds you to wait patiently for the right opportunities to act.

This totem animal could be a calling to reconnect to your spirituality. It could also indicate powerful messages from the spirit. You could be called to recognize your leadership abilities or some other abilities and skills you possess.

This bird also appears to remind you of some opportunities you might have missed or overlooked. It could also indicate a period of determining your goals and desires and going after them.

When to call on Eagle?

You should call on eagle as your spirit animal when:

Dreams about Eagle – Interpretation and Meaning

If you dreamed about eagles, that dream could be a calling to do some soul searching and introspection. If the eagles were soaring, that could mean that you need to listen to your inner guidance and the voice of your intuition.

You could have some important messages coming in soon so be attentive and alert to potential signs.

This dream could also indicate your ability to rise above some circumstances or see a broader picture of some situation so you don’t make narrow-minded choices and decisions.

If you dreamed about an eagle attacking you or someone, that dream could indicate the need to evaluate the boundaries you have imposed on yourself.

A dream, in which an eagle was looking at you, could indicate the need to do some soul searching, asking questions about your true life desires and goals and deciding if you are satisfied with them.

A dream about eagles could also symbolize being able to rise above some circumstances and issues you are encountering.

Dreaming of eagles mating is a very good sign, usually indicating that you have achieved some important goal, usually spiritual in nature, you have been heading towards. It is a sign that you did a great job and the rewards that are expecting you.

If you dreamed about an eagle or eagles devouring their prey, that dream isn’t a good sign, and could indicate some danger threatening you. This dream could also symbolize someone’s ruthlessness, usually yours.

Maybe it is a warning from your subconscious not to be ruthless and inconsiderate towards other people to accomplish your own goals.

Sometimes this dream warns you about a person in your life who behaves in such a manner.