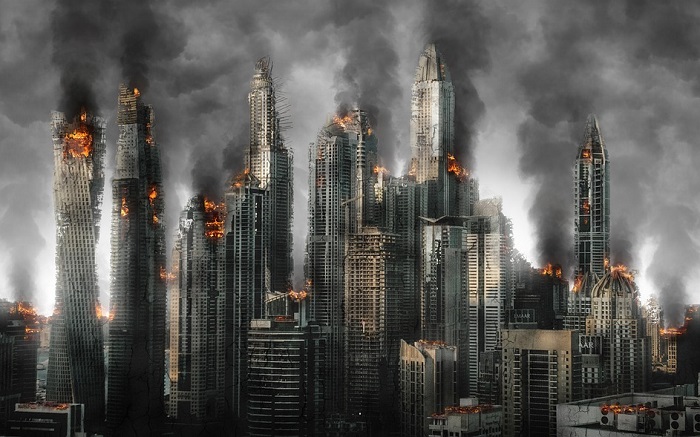 Some fears are common, and very often for the majority of the people in this world, like the fear of death. We are scared of leaving this world, but not only that, we can be terrified from the way we will go to the other world, we are not happy with any way we will go, from sickness or a car crash.

And the fact is that these are all rational fears – the reality is that we will die, like the one particular thing in this world, and also, the fact that it will be probably from being old, sick, or having an accident, but for sure all people die.

Now, there is another irrational fear – a fear that we will go in the worst, but the almost fictional way – we will die when the world ends, in perhaps some dramatic way.

Ending the world is a crucial part of any fictional story; it is the scenario that scares us very much; it is described in the Bible and numerous other books.

Apocalyptic scenarios include fire from the sky, earthquakes, volcanos, or sun bursting into the Earth, aliens attacking, etc….

There are millions of the way how the world will end, and as such, they are common motives in a dream world.

Their meaning – precognition of the events that will come, or just the response of your mind to something that occurs during the day?

Probably the second, but it all depends on the entire dream, all elements in it, and of course, you as an individual.

Read here the most common meanings of this dream.

Dreaming the end of the world can have different interpretations depending on how you dreamed and experienced it, and your general status in life in the current moment, where you are, and how you feel.

If you have dreamed of the end of the world, in the way that mankind went to war and how atomic bombs are destroying everything, it could mean that there will be some significant changes in your life in the coming period.

It is also possible that you will lose support from a person who was always there when you needed help.

Now, through your fault, you can expect nothing more from her, and you will not be able to justify the mistake you made.

This will have far-reaching consequences for you, and you will have to learn to fight on your own to prove that you are an adult and to regain her or his respect.

If you dreamed that you were the one who caused the end of the world in some way, it might mean that you are ready to face the consequences for the mistakes you have made.

The way you are the cause of the end of the world speaks a lot of your perception of yourself – maybe you did not make any mistakes, but you are so insecure about your life, any of your actions… You are scared that you are doing everything wrong, and you are prone to over exaggerating things, thinking that your efforts are affecting both your life and the lives of everyone else in a significant way.

If you have ever dreamed that a giant volcano has erupted and thus caused the end of the world, it may mean that you are a person who tends to accumulate anger in yourself, which we do not recommend you do because it can seriously endanger your health. You are one of those people who have learned to suffer for their own and others’ interests.

If you have already put yourself in a situation where you have to suffer and keep quiet about some people, then you have to find a way to get all that accumulated anger and rage out of you in some form until you learn to channel it. We advise you to do some sports and, best of all, some contact martial arts where you will get rid of all the accumulated negative energy and believe that after a while, you will laugh at what made you nervous.

It is possible that you have decided to change the job that you have been doing for many years and to dedicate yourself completely to something else. You have been planning to do this for a long time, but you have always hesitated because you are afraid of risk and failure.

But try to imagine yourself in about ten years or more in that new job. Think about whether you can progress there and what your options are.

Observe the people who do the job, what they look like, and whether they are happy. If that satisfies you, cut at the end and embark on that story.

If you dreamed that a big black hole swallowed our planet and its surroundings, it could mean that there is a person in your life who is not happy with whatever you do for her. You have a very ungrateful individual next to you who will understand your behavior only if you start to ignore her in every sense of the word.

Only in this way will he realize that something is not ok, and you should. Often this is the healthy way to be with someone in a relationship. You should not feel like it if you want to be someone who cares for you, as much as you care for that person.

An alternate version of this dream, or an alternate meaning – you have an egocentric personality, and in this current moment, major negative energy that is swallowing almost everyone who is near you. This is the unhealthy part, and it needs to stop as soon as possible.

Try to work on small steps, doing whatever you can to eliminate that negative energy, eliminating it permanently. You will see soon how your environment will transform and how the black hole will become just a dot.

Decoding the End of the World Dreams

As you could have seen for yourself, dreams that have as a central theme the end of the world is very interesting to observe because they speak a lot about your current state, they are associated with your mental health and the perception of the world you are living right now.

You are aware that you have made a mistake and reacted in effect in certain situations, and you are ashamed to stand up in any way because of that.

Most important of all is that you have understood and are convinced and firmly believe in yourself that it will not happen again.

Try to understand whatever happens, that you can’t control everything and that it shouldn’t get you off track.

Life can be both extremely beautiful and very cruel sometimes. It is up to you to accept the situation as it is and to continue with your heads held high.

Another version of the end of the world dream is common – when you have a dream that the great wave has wiped out all living things on the planet can mean that you are afraid of water. You are a swimmer but extremely careful because you know how unpredictable the water can be, and you cannot relax in it. You are probably a person who prefers to swim in the sea when it is calm than in a river where you cannot see the bottom and where you can fall into a whirlpool.

It is possible that you had a friend or acquaintance who drowned and that you thought a lot about how that person felt when she realized that her end had come and that there was no salvation for her.

This thinking has started to cause fear in you, and it is possible that you have had dreams in which you are sitting.

Try not to think too much about it and overcome the fear so that you can enjoy the water again, but don’t take the risk and try to swim across an unknown river or lake; that’s not the way.

But, the dream about the big wave that is ending the world can have a deeper meaning – it can speak of the incredible energy that you have inside of you, and that is not being used.

When it does, you are going to alter your entire environment to the core.

So, in a way, this dream is a call to wake up the sleeping energy.

If you dream that the whole living world is extinct due to some unknown and sudden virus that has attacked humanity, it can mean that you have a fear of the masses of people from the crowd.

Be afraid to find yourself in the subway or on a bus that is crowded and has large gatherings like concerts or theaters. You are a person who does not trust people and is afraid of strangers. You have a hard time making friends, and you have a very small circle of people around you, and you stick to it.

It is possible to draw some trauma from a childhood in which you were injured in a game or in some riots in which there was a mass.

Try to talk to an expert and try to get rid of that fear, which prevents you in many ways.

Other versions of this dream, to some smaller extent, speak of the people who are close to you, and yes, they can show negative behavior on their part. In this way, you can use such dreams as an alarm for them to change her behavior.

In the coming days, you will meet acquaintances and people with whom you will overcome your fears and understand your true values. You will realize that saying hello to someone unknown on the street is not terrible, so you can make someone smile that it is not terrible to be rejected by someone you like because there will always be someone who will say yes.

In any case, end of the world dreams is not so scary, in a sense that their meaning is not scary at all, but they certainly have a mission to make you re-examine yourself.