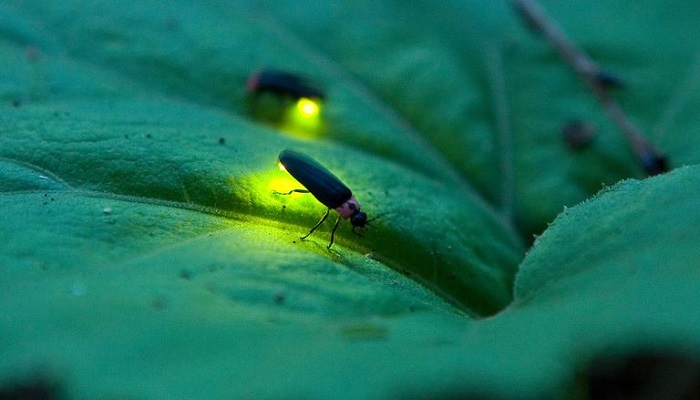 Fireflies or Lampyris noctiluca are insects from Coleopteran order.

They are known around the world thanks to their incredible, almost magical ability to glow in the dark!

Fireflies could emit different colors of fluorescent light, from bright green, over yellow to bright reddish. Fireflies have short lifespan; they live for about two moths only. Fireflies are very small insects and shy ones.

Although they are rarely seen, scientists count over two thousands of different firefly species.

Why fireflies glow in the dark?

Their magical light is what has been intriguing people for so very long. Why do they glow?

There are several reasons that explain why these interesting fellows emit light. The main reason is reproduction. Lights are the way for fireflies to attract a mating partner.

Depending on particular firefly specie, there are several patterns deciding on their glowing habits.

Female Photinus fireflies do not fly, but emit flickering lights as a response call for male ones.

Besides the role in reproduction of fireflies, the lights also represent a defense mechanism.

An interesting fact is related to female insects from Photuris genus of fireflies. They simulate flickering of other fireflies’ species for purposes of luring the prey. It is known as aggressive mimicry. 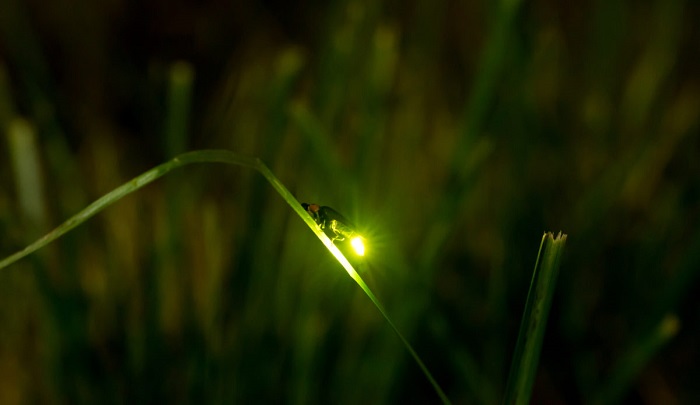 They attract male ones, but afterwards they eat them, similarly to praying mantis. They are known as femme fatale of lighting bugs. They inhabit North America.

Fireflies do not taste very good, although they are not venomous, but predators rarely feed on them.

Lights are a warning sign that suggest predator species they came upon a ‘special’ bug, a firefly, not any other, so that they could avoid it.

The very process of fireflies glowing is called bioluminescence. This is a biological process that takes part in special cells fireflies have in their bodies.

During the process, cells generate substance called luciferin and an enzyme known as luciferase.

In the process, luciferin goes into a chemical reaction and transforms into oxyluciferin, which results in the light we see fireflies emit.

This type of light is called cold light, since it emits neither infrared nor ultraviolet rays. Firefly luciferin is found in many species of Lampyridae insects.

The name luciferin comes from Latin lucifer, which literally means ‘light-bringer’ or ‘light-bearer’.

Yes, it is also the name given to the fallen angel Lucifer, the star that fell from heaven, found by these names in the most widespread interpretations. Many parallels have been made between Lucifer as a character and different supernatural entities.

Besides the most popular one that identifies Lucifer with Satan, it is less known that Lucifer was also a figure from Ancient Greco-Roman mythology.

He is Phosphorus in Greece and Lucifer in Rome. He was regarded as the son of the goddess of dawn and thought of as the Morning Star or – Venus.

The one who brings the light he was, in many accounts.

Let us return to fireflies and luciferin. If you think about it, we could see fireflies as magical insects that reflect the light of the morning star, but it is only a loose idea; it is nowhere stated that fireflies are associated with it.

Okay, so more on facts we know about fireflies and their lights.

Later on, we will talk more on their symbolic meanings and potential spiritual powers as totem animals.

The process by which fireflies generate light is extremely advanced, since 99% of all energy invested is being converted into light, while only 15 goes for warmth.

Think about those eco friendly led lights that do not warm up and last for much longer than regular ones. Scientists are very interested in luciferase and the whole process.

They use it as a biomarker for discovering various substances found within our body and measuring their concentrations.

Although we associate fireflies with their magical lights, not all species of fireflies glow.

Those are daytime fireflies, for example, those that come from Ellychnia family. These fireflies are active during the day, but they often inhabit shady places.

These non-luminous fireflies could be found hiding beneath plants. They belong to luminescent species and they use pheromones to attract potential mating partners.

Along riverbanks of Malaysian jungles, these magical bugs make a whole ‘symphony’ of flickering lights, especially at night.

On Philippines, thousands of fireflies could be seen over the whole year, in the city of Donsol.

Fireflies have their gathering habits. In United states of America, in Smoky Mountains around Tennessee, one of the greatest ‘spectacles’ of fireflies’ gathering takes part during the first week of June.

Seeing thousands of flickering lights of these magical bugs must be a view to remember.

The Serpent and the Firefly

Let us start with a Zen story about the Serpent and the Firefly. It begins as all old tales begin, taking part in ancient past.

Long ago, the story tells, the serpent was chasing the Firefly, with the intention to eat the bug. The unfortunate bug did all the best to fly fast, moved by the energy of fear.

Well, the ferocious Serpent did not want to give up its prey. The serpent persecuted the Firefly for three days.

Finally, the Firefly got so exhausted; it could not continue to run away, so it stopped and asked the Serpent to present with three questions.

Well, the Serpent said it is not its manner to answer others’ questions, but, convinced the poor Firefly is going to be eaten anyway, the serpent allowed questioning. So, the Firefly asked three questions.

Then the Firefly asked a very fair question: “Why you want to eat me, then?”, to which an unpleasant, but honest answer came. The Serpent said it could not stand seeing its flickering shining light all the time.

The moral of the story is the following. The story suggests there will always be those annoyed by your light. What you will decide to do is your choice only.

You could choose to shut down your light and avoid ‘serpents’ in your life or you could choose boldly to shine and deal with the burden that comes along.

From this Zen story, we see fireflies as symbols of personal light and uniqueness that not everyone would be happy about.

Let us talk about Native American firefly symbolism first. Native Americans consider fireflies a symbol of knowledge, so the bug is featured in some of the rituals and ceremonies.

Just as in the Zen story above, Firefly plays a role in Native American folklore. Apache tribe tells a story about the Fox and the Firefly.

According to the legend, the tricky Fox did its best to take fire from Fireflies. The Fox successfully escaped with it and gave the Hawk a firebrand who passed it on to Crane.

The Crane scattered it everywhere and this is how the fire was spread around the world. The remains the Crane dropped onto a tree that caught fire.

Fireflies chased the fox to its burrow and the cursed it never to make use of the fire for the Fox’s own cause. However, the smart Fox knew the fire hides in trees and knew how to make it.

The Apache legend says the Fox taught people making fire and the story also explains how the fire lies within the every tree. In this story, fireflies are seen as selfish and proud guardians of fire.

The legend could be seen as an allegory. Fire has often been associated with the idea of knowledge and enlightenment and it is the idea that could be found in different traditions throughout the world.

Fireflies were the ones to keep the secret knowledge away from others. They were the masters of fire, until the fox stole it and ‘enlightened’ the world.

Lighting bugs have different symbolic meanings in Far Eastern traditions. Fireflies are a part of local traditions in Japan.

Japanese associate fireflies with souls of the dead, usually associated with heroic figures. In Vietnam, fireflies represent similar idea. In China, however, fireflies are associated of those who stay awake at night, studying.

This is another connection between fireflies and the idea of knowledge.

In Japan, a song titled The Light of the Firefly is performed upon graduation and several other ceremonies.

As for the origin of fireflies, one East Asia folktale claims they came from the burning grass.

Fireflies could be associated with many ideas and symbolic meanings, apart from these we have seen in the folktales and legends mentioned.

One of universal ideas associated with fireflies is that of love and attraction.

Fireflies mostly use their lights to attract their potential mating partners. This could symbolically be associated with love, fertility and attraction in general.

Fireflies thus, represent not only the beauty of love, but also the magic of love game, the seduction and flirtation, in their most positive to their most destructive ways. A fatal attraction, some would say.

Fireflies are commonly seen as insects that represent love in its pure, good form. The flickering lights are like those butterflies we feel upon falling in love with someone.

These glowing bugs are also associated with the idea of ultimate knowledge, enlightenment, clear-seeing and progress.

Let us only remind you of the story about the Fox and Fireflies, in which fireflies hold the secret of fire.

The name of the substance that actually makes them so magical and popular, luciferin, is associated with the ancient idea of a ‘light-bearer’, sometimes associated with the one who opened the eyes of people to see the difference between good and evil, to fathom all the sides the life they have.

In this regard, fireflies are also associated with communication, mindfulness, self-conscience.

They could be seen as the light we posses within, they awaken our inner light, if we take them for spirit animals, our totemic guides. Fireflies are the light in the darkness, the ever-burning flame we all have within.

As a totem animal, firefly inspires search for knowledge, about the world and about yourself.

Firefly spirit enlightens your way and helps you see the path in front of you. Its light is small and not particularly illuminating, but it illuminates from the inside, since the very light is the part of fireflies’ body.

Your Firefly totem could help you find the greatest motivation and inspiration, helping you also to go through the most difficult times in your life.

If it happens that you face dark and difficult times, your Firefly spirit would come to you, shining in the darkness, like a guiding precious little star. It is a symbol of hope, persistence, and the inner power.

Remember the story about the devouring serpent and the little firefly?

Firefly spirit supports uniqueness, even if t sometimes means you have to go through hard times to maintain it and make it glow brighter.