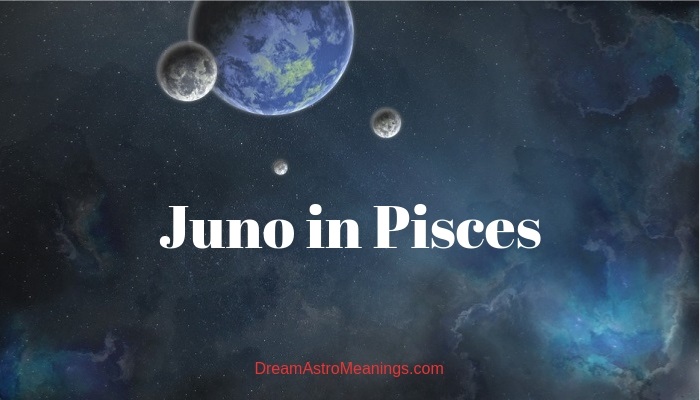 Like many other astronomical bodies, Juno also bears the name of an ancient Roman goddess.

Juno, the goddess, was the ruler of marriage, childbirth, as well as women’s sexuality. Juno was the wife of the supreme Roman deity, Jupiter. She was the patron of Rome and protector of the state.

Juno was a much-respected deity, especially because of her devotion and loyalty towards her husband, who didn’t deserve such behavior. Jupiter was not faithful to his wife Juno and had numerous affairs she was aware of.

Juno in astrology symbolizes commitment, compromises, marriage, relationships, infidelity, betrayal, etc. It indicates which areas of our lives need balancing. Juno has the energy of Libra/Scorpio or Venus/Pluto.

This asteroid is very important to show us the areas where we have the potential for growth and empowerment.

When Juno makes strong aspects with another person’s to whom we are attracted to planetary and asteroid placements that is a strong indication that marriage or long-term relationship is possible between the two of us. Juno’s influence is important for marriages and long-term commitments.

Juno was a devoted wife, but she was constantly suffering because of her husband’s infidelity and frequent affairs. She was insecure and doubtful.

Juno in astrology also points out the circumstances and situations in our relationships which make us feel jealous, insecure and suspicious.

Badly aspected Juno in a person’s chart could make that person insecure, jealous, and suspicious, etc. Juno in our natal chart also indicates the attitude we consider deal-breaking or abusive in a relationship, but it could also indicate our readiness to put up with something in our relationship which could prove to be detrimental for it and cause the relationship to end.

Juno also reveals the potential for longevity in our marriage or long-term relationships as well as the possibility of having more than one marriage.

It is important to make a difference between our Venus and Mars types of partners, and Juno type of partner. While Mars and Venus describe our ideal partners based on their romantic and physical qualities, Juno shows the essential qualities our long-term partner our spouse should possess.

We don’t say that we should neglect the romantic feelings and the physical attraction, but they are not enough to build a stable and lasting union between two people.

There needs to be mutual understanding and respect between the partners, they should share similar goals, and could trust each other, as well as to accept one another openly and completely, without a need to change anything about the other.

When we look for the traits of our ideal mate, we should discover them by combining all these influences.

Juno gives us valuable information about our ideal life partner. We should be aware of Juno’s qualities and recognize them in the potential partner we consider committing to.

If the person doesn’t exhibit these qualities, we better think twice is it worth risking our time, energy, and effort for a relationship simply based on physical attraction or emotional infatuation.

The asteroid Juno indicates the level of our patience and our ability to wait for the right person to come, without rushing into relationships and/or marriages with people we know aren’t the right matches for us.

When we take our time to make a choice considering Juno’s messages and advice, we are more likely to make the right choices and choose the right person to be with, in a committed relationship.

If we have an honest approach in judging the person’s qualities and their suitability to be in a committed relationship with us, we will never again make a mistake and commit to someone simply because we are physically attracted to them.

Juno’s guidance is essential when choosing the right mate because we can easily be blinded by the feelings of love and physical attraction, which could make us overlook the red flags about someone we are convinced is the right person for us.

Consulting Juno should be the final step in judging a person’s suitability for a committed partnership because it reveals our deepest needs in a partner, and that prevents us from choosing the wrong one.

Men with Juno in Pisces often choose to commit to women who can have a dreamy and a bit unrealistic personality.

They are drawn to unusual types of women who appear different and a bit mysterious.

In some cases, these people might end up committing to women with psychological problems, problems with addictions or some other problems with their personality.

These men often experience relationship disappointments because the women they choose appear to be different than they have previously imagined them and they realize that their romantic idyll isn’t likely to happen with that person.

These men are prone to romantic illusions and self-deception regarding their romantic involvements.

Women with Juno in Pisces desire a partner who is romantic and has a vivid imagination.

They desire someone they could experience a full merger of body and soul, and become one being. They can be prone to self-deceiving themselves and imagining things which don’t exist.

They often imagine having a romantic relationship or even marriage with someone who is not a part of their lives in any way, but they imagine they are.

These women are able to make up stories about people who don’t even know they exist and in some cases become obsessed with such people. These are extreme cases, of course.

The main issue with these women and their romantic attachments and involvements is their inability to judge men’s motives towards them.

They could be prone to interpret a man’s behavior in a whole different light than it actually is, and consider that a man likes them when he actually doesn’t.

Romantic illusions are some of their major issues when it comes to relationships.

The bad traits of Juno in Pisces are: prone to self-deception and illusions, prone to living in an imaginary reality, wrong choice of partners, emotional escapism, emotional manipulation, retreat, detachment, bad judges of character, etc.

When their ideals are not met by their partners, these people could be prone to emotional escapism, retreat, detachment, running into a world of illusions and fantasies, and above all self-deception.

These people could be prone to playing the role of a martyr and victim and use that as a way to emotionally manipulate their partners.

They often have an idealized view of relationships, romance, and love. They often see people as they imagine them to be and not as they really are which often causes disappointments in their love life.

These people are often bad at judging characters. These people often hide from reality in their imaginary worlds.

Their ideal love scenario is a union between these souls which become one. They don’t seem to realize that in reality things aren’t the way they appear in their mind and imagination.

Their idealistic and dreamy nature could easily push them into a relationship with someone who could prove not worthy of their time and investment.

These people are often attracted to people who have a troublesome personality, have addiction problems, have psychological problems and in some cases serious nervous disorders.

They can often be drawn to people who for some reason need saving, and that can be detrimental for their personal wellbeing. They need to begin living more realistically and learn how to be a better judge of characters.

People with Juno in Pisces are very imaginative and dreamy. They carry a picture in their mind of how their ideal relationship and partner should look like.

Unfortunately, they don’t have a gift of judging people’s characters and often end up making poor relationship choices.

The main reason is their tendency to idealize people, to make up stories about them, and refuse to see the reality and the truth about their character.

These people are prone to attracting in their lives people who are troublesome and who create problems for them as well.

They often end up with a person who has some problems with the law, or addictions, or has psychological problems, and even severe nervous disorders. They need to learn to stop living in an imaginary world and begin facing reality because it is for their own good.

These people are very romantic and desire a complete merger of souls with their ideal partner; that is why they need to learn to observe more the people they are attracted to which will enable them to notice the red flags in time.

If they begin paying more attention to the choices they are making, soon, they will enjoy in a perfect relationship with the person of their dreams.